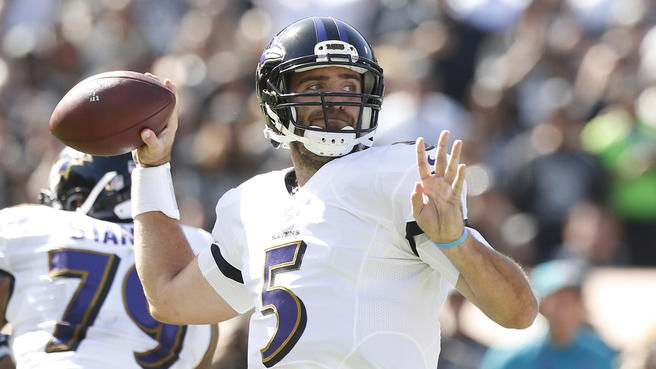 Ravens Deliver a Knockout in Oakland

When the Ravens 2017 schedule was released back in April, most of us thought it would be extremely difficult for the team to steal a win in Oakland. After all, the Ravens would be just 2 weeks removed from a trip across the pond to London and 1 week removed from a showdown with their biggest rival, the Pittsburgh Steelers.

And it’s not as if their west coast track record in recent years is anything to write home about.

But during this particular trip to the left coast, the Ravens seemed more purposeful. They had a plan and executed it brilliantly and in doing so they’ve turned around a season that could have slipped away quickly despite a promising (2-0) start, and managed to stay in the thick of things in the AFC North.

Last week in a piece titled, Ravens Won’t Back Down (a tip of the hat to the late Tom Petty), I wrote that the NFL, perhaps more than ever, is watered down in parity – perhaps even mediocrity. It only takes a couple of wins in a row to change the complexion of a season since no club, even the undefeated Kansas City Chiefs, appears to be a dominant team.

Now, five games into the season, the Ravens are tied with the Steelers who are on the road in Kansas City during week 6 while Baltimore hosts the (1-3) Chicago Bears who are at home against the Vikings tonight.

Things can and do change quickly in the National Football League and yesterday was a perfect example of that, in a good way, for the Baltimore Ravens.

Joe Flacco said that the Ravens needed to start fast and play with a lead, something that prior to yesterday they hadn’t done since Week 2. It didn’t take long for the Ravens to change all of that, jumpstarted by a perfectly placed ball to Mike Wallace on a 9-route down the left sideline during the first play from scrimmage. The 52-yard connection to the Oakland 23 helped set up the game’s first score just 129 seconds into the game. Yes, that’s a fast start. Credit Joe with improved ball skills as well. He was far more deceptive in the exchanges with ball carriers during delays. His streak of 10 consecutive games with an INT ended…Wallace wasn’t busy but he did rack up 133 yards on three catches (44.3 YPC) and if not for a deep post that was thrown a bit late, he would have added a few more yards and a score.

That’s how we like to start a game. #RavensFlock pic.twitter.com/gwswVo6qzi

Buck Allen (21 carries for 73 yards) and Alex Collins (12 carries for 55 yards) combined for 128 yards. Credit both for their determination, driving the pile for extra yards when most thought their forward progress had stopped. Allen exhibited nimble feet inside the tackles to avoid would-be tacklers while Collins is such a quick accelerator that it throws off tackling angles for defenders.

Willie Henry is becoming a disruptive force against the pass. Yesterday he had a QB hurry and 2 PD’s, one of which he nearly intercepted. He added two tackles for a loss as well…Matt Judon is proving to be far more athletic than he was during his impressive rookie campaign. He relentlessly chases down plays. Yesterday he crossed the field to track down a ball carrier from the backside, added 1 TFL and defended two passes. On one play in the red zone he stayed with TE Jared Cook down the right sideline, an inviting mismatch that Judon thwarted. He also showed explosiveness to break up a short pass attempt to Seth Roberts. 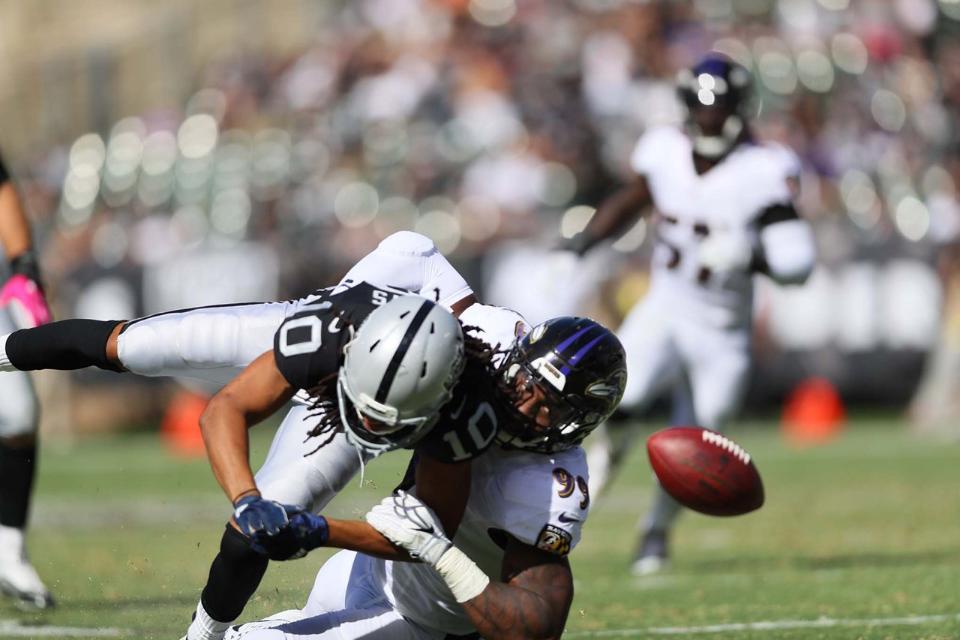 Terrell Suggs bounced back with a solid game after a very subpar outing against the Steelers. He had a sack to go with 4 tackles and 2 QB hurries…The secondary limited Amari Cooper to 1 catch for 8 yards…Tony Jefferson is a much better player around the LOS. Hopefully Dean Pees noticed…The Ravens limited the Raiders to just 245 net yards, an impressive feat on the road.

Both Pees and Marty Mornhinweg had effective game plans. Pees mixed in various looks and didn’t tip the blitz packages too early. Mornhinweg took some shots downfield, stuck to the run which helped the play action, while slowing down the Raiders rush and quieting the Black Hole. Nice deceptive play call on the reverse to Vince Mayle…The Ravens had only 1 penalty for 5 yards. That’s disciplined football.

The Ravens red zone efficiency (2 for 5) has to improve. The play selection deep in enemy territory had little rhythm…Michael Pierce had his worst game of the season – by far! He was a non-factor and was effectively sealed off by the Raiders interior line. That’s a big part of why there always seemed to be a hat on C.J. Mosley who struggled to shed blockers. Ditto for Patrick Onwuasor although he does seem to have a knack for making key plays. His forced fumble in the first quarter defending Jared Cook paved the way for the Ravens 2nd touchdown…Jimmy Smith played only 6 snaps. His tender Achilles is a concern.

Brandon Carr looked absolutely loss on Michael Crabtree’s touchdown catch. When E.J. Manuel broke containment, Carr lost his man, paving the way to an easy pitch-and-catch TD…Marlon Humphrey played well overall, but his technique when covering Crabtree deep in the red zone could have been costly. It looked like his shoes were tied together on the play. Fortunately, Manuel’s throw was off the mark…The injuries continue to pile up. Terrance West, Carl Davis and Matt Skura all went down with leg injuries.

This week’s nod goes to the Ravens offensive line. They kept Joe Flacco clean and did not yield a single sack despite the menacing presences of Khalil Mack, Mario Edwards and Bruce Irvin. TE’s Ben Watson and Nick Boyle did a nice job of chipping to help slow down the pass rushers. The offensive front was also very impressive when grinding out yards on the ground despite the Raiders investing ample resources to choke off the running game. During their final meaningful drive that didn’t include the victory formation, the Ravens ran 12 plays for 54 yards, 10 of which were runs, converting 4 first downs and eating up 6:26 of game clock. It was an exclamation point on a great outing by O-Line Coach Joe D’Alessandris’ unit.