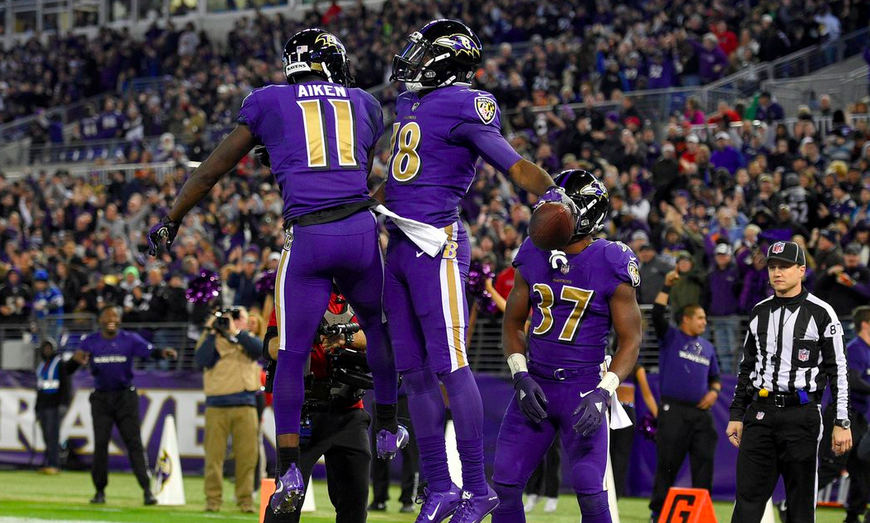 Let’s take a look at the stats, notes, quotes, and more to get you ready for Ravens/Dolphins, ,c/o Casa Mia’s White Marsh. 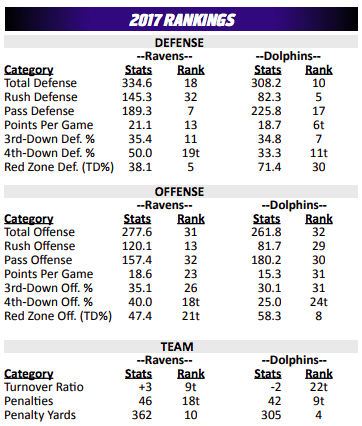 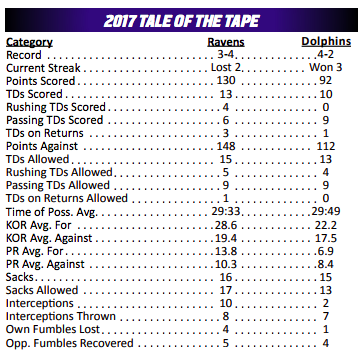 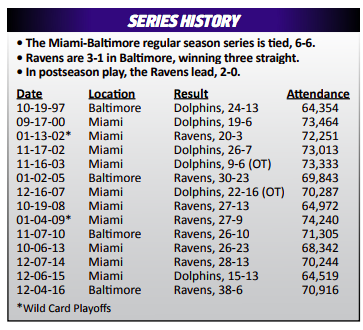 QB Joe Flacco on how the offense moves forward & strives to improve:

“You go back to work. You get better, you look at where you made mistakes. But I wouldn’t say that, overall, we are trying to fix something that is completely broken. We can’t look at it that way. We have to look at the areas that we can do things well in and continue to exploit the defense in those things that we do well. We will make it happen. We have to keep our heads up and play one game at a time. This is where we are right now, and there’s nothing we can do to go back in time to change it at this point. We work hard. We are in the building 24/7 trying to get everything as good as it can be, so we will continue to do that.”

OLB Terrell Suggs on bouncing back for Thursday night:

“The team is built around the defense, and we don’t have to be perfect, but we have to play better than we are. We are seven games in, we have nine left. Right now we stink; you can write it in there, ‘Yeah the Ravens suck, yada yada yada.’ But with the schedule going ahead, I still think we can do something magical. You know what kind of team we are once we get in ‘The Show.’ We have a home game on Thursday, an AFC home game on Thursday. So, you defend your home turf, and everything can look up for you.”

K Justin Tucker on he and the team turning their attention to Thursday’s game so they perform well:

“The short week does present challenges for everybody, coaches and players alike. In the years that I’ve been blessed to be here, we have done pretty well on Thursday nights, so it’s a challenge that we look forward to. I think it will be a great atmosphere, and it will be fun, like it always is. I think if you ask anybody in here, we are all chomping at the bit to play another game, just to get back in the win column.”

“Obviously, the Ravens’ defense is historical here. We know that it comes down to us getting out there and keeping offenses at bay. At the same time, I am proud of my guys. We only gave up one offensive touchdown – the rest were field goals. I am proud of my guys. They are fighting their butts off, just doing everything they possibly can to keep it a close game. I wouldn’t go to war with anyone else.”

RB Alex Collins on what it is like playing at Baltimore’s M&T Bank Stadium:

“It’s amazing. I love everything about the stadium – the atmosphere, coming out through the flames. The walk-out has to be the best thing about it, though. When we walk out of the locker room and the fans are there shaking our hands, I don’t know if they do it like that anywhere else in the NFL. They have the hype song playing, and all your teammates are around. I think that has to be hands-down the best feeling. When I experienced that, I was like, ‘Wow. This is one of the coolest things I have ever been a part of.’”

GETTING TO KNOW YOU ~ Q&A with Alex Collins

“It is very welcoming. I love the grit and the way this organization handles adversity. The way they do things around here – the family atmosphere, everyone is just close and together. From the outside in, you really appreciate it and want to be a part of it. We work hard together, we grind together, and it is really a family atmosphere.”

Your running style in three words:

Did you grow up a Dolphins fan?

“Absolutely. My whole family was huge Dolphins fans. I’m pretty sure they still are to an extent, but whatever team I am on, that is the main team all my family is a fan of. But definitely back in 2007, I was playing with the Dolphins on Madden. No matter how they did, that was my squad.”

What players do you model your game after?

“Ricky [Williams] was always my guy growing up. That was my first favorite player, especially being that I was such a Dolphins fan. As I got older and really started to learn about different backs, I just started to take in certain things. For instance – Frank Gore – I look at his running style. Edgerrin James was a guy I looked at. Brandon Jacobs, a strong guy who could run people over. I looked at guys’ techniques and studied them.”

“I would watch the way they did those things over and over and try and master it myself. I felt if I was one-dimensional, teams could always time up and know what I was going to do. But if I learned different moves, then sometimes I’m running by you, sometimes I’m doing a jump-cut, and sometimes I’m spinning. It confuses defenders; they don’t know what to expect.”

What is the best concert you have ever been to?

“The Tortuga festival in Fort Lauderdale. I’m a huge country music fan, and it had a little bit of everybody that I enjoy listening to – Chris Young, Chris Stapleton, Joe Nichols, Thomas Rhett, Jason Aldean, Carrie Underwood. Hearing all of them and watching them perform was just incredible.”

Why is your nickname Buddha?

“Originally, I thought it was because I was a big baby; I was 12 pounds. But when I was in college, my head coach talked to my dad, and he asked him that same question. My dad told him that out of all of his kids, I’m the only one who came out with his complexion, and everyone else was my mom’s. He said I was his good luck charm. People called me Buddha growing up, and it stuck.”

Favorite thing to do in your down time?

“Listen to music, play video games and play with my dogs. I have two German Shepherds – Scrappy and Chaos.”

Jay Cutler on Wildcat: "Sit there, don't get hit, don't touch anybody, don't move. I feel like I executed that one." pic.twitter.com/vAXS5ayxW0 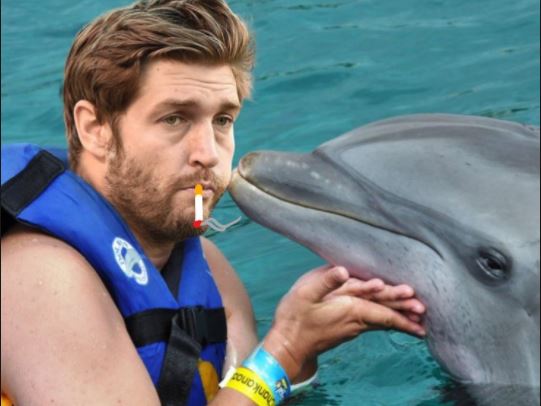