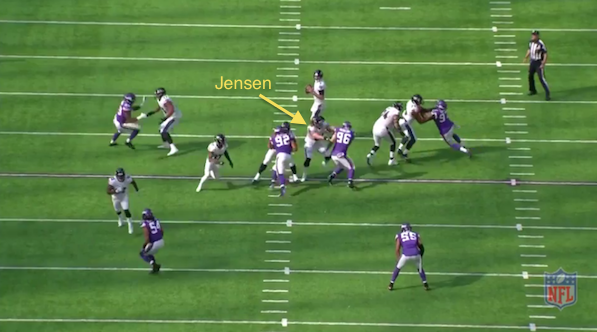 While the Baltimore Ravens offensive line as a whole has disappointed for long stretches early this season, fifth-year center Ryan Jensen has been one of the bright spots.

In his first full year as a starting center for the Ravens, the former practice squad player has gone from afterthought to potential long-term option for the team at the position. Known for his physical playing style and at the echo of the whistle, Jensen has earned a reputation as a physical – and sometimes borderline dirty – player.

But Jensen’s play goes beyond simply getting in opponents’ heads after the play; his performance in the first eight games of the season has seen him make a case to be the Ravens’ franchise center. The sample size is still relatively small, but if Jensen’s quality of play persists through the second half of the season, it will be a no-brainer decision to bring him back as the starting center in 2018.

On an offensive line that’s seen a slew of injuries and underwhelming play, Jensen very well may be the second-best long-term option for the team behind left tackle Ronnie Stanley. In a season of negatives for the Ravens offense, Jensen has been one of the lone positives.

Let’s look into Jensen’s play so far this season and see how he has impressed.

Jensen’s mobility and ability to get the second level has stood out this season. Here, the center works his way upfield off the snap. 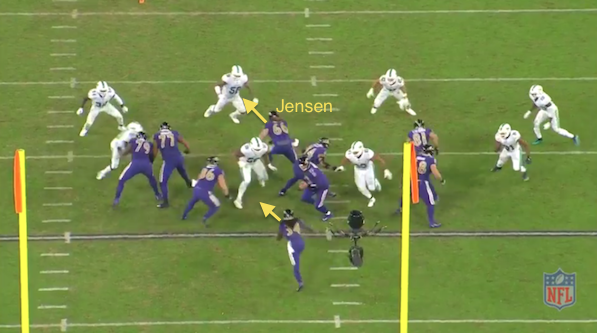 As running back Alex Collins receives the handoff, Jensen has engaged with the inside linebacker, and works to turn the defender away from Collins’ running lane. Getting to the second level in time is half the battle; finishing the play by locking on with the linebacker and holding him off makes the difference. 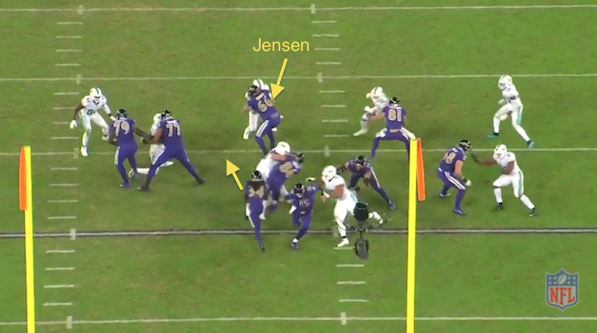 With Collins through the first line of defense, Jensen has fully engaged with the linebacker, turned him away from the play, and opened up an easy path for his running back. 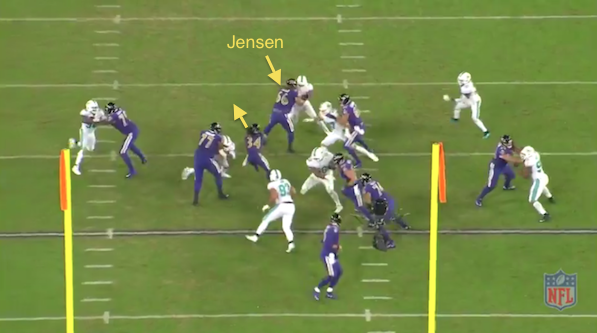 The play above is a simple execution that quite frankly several Ravens linemen have failed to consistently deliver on in 2017. Jensen’s quality play has been a product of consistency more than regularly dominating the opposition. But on an offense with so many struggles, simple consistency is a much welcomed addition from Jensen.

Being in his first year as a full-time starter, Jensen’s overall awareness and feel for the position also stand out.

Here in pass protection, Jensen locks on with the interior defensive lineman (92) to his left. 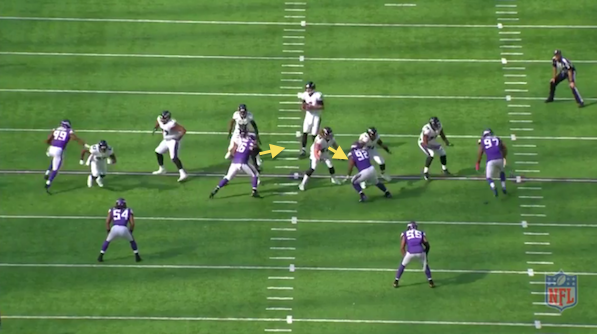 On this play, though, the two interior linemen (92 and 96) run a stunt in the middle, and Jensen gets caught in between both defenders. Failure to properly pick up this pass rush could result in an easy sack for the defense. 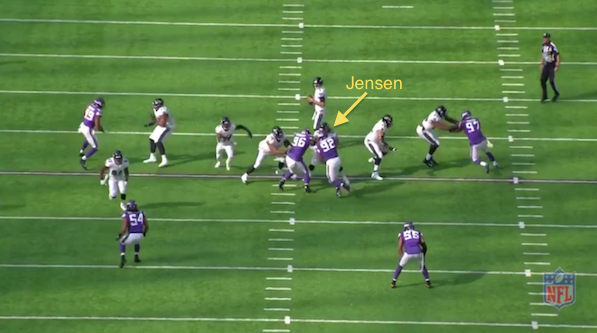 Jensen perfectly executes the play as he shifts back over to his left to pick up the new rushing lineman (96), sealing off the inside and allowing a clean pocket for quarterback Joe Flacco to make a throw.

Savvy and effortless plays like this in pass protection lend to the belief that Jensen has an innate feel for the center position.

As mentioned before as well, Jensen is known for his physical overall play, which typically comes to life on run-blocking plays. 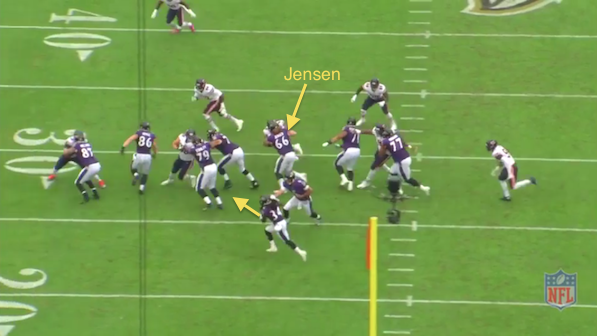 As Collins approaches the lane, Jensen shoves the defender off balance, allowing Collins to cut back toward the inside of the field. 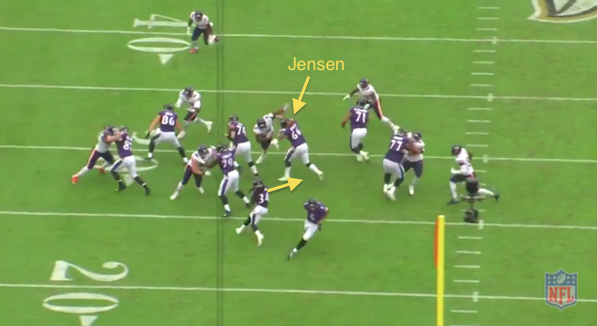 After the physical shove, Jensen reengages with the defender and seals off the block, allowing for an open field inside for Collins. 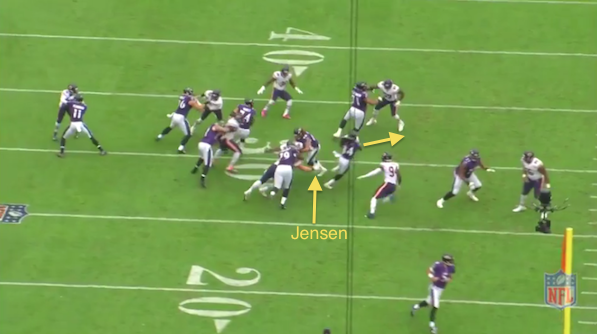 Jensen is at his best on plays where he can show off his pure strength. For a player with only a handful of starts to his name prior to this season, Jensen is certainly shaping up to earn extended time as a starter in Baltimore’s offense.

The offensive line as a unit still has a long way to go, but if Jensen maintains his quality of play over the final eight games, the Ravens can go into the 2018 season with little concern about the center position – save for finding space under the cap to lock him up.