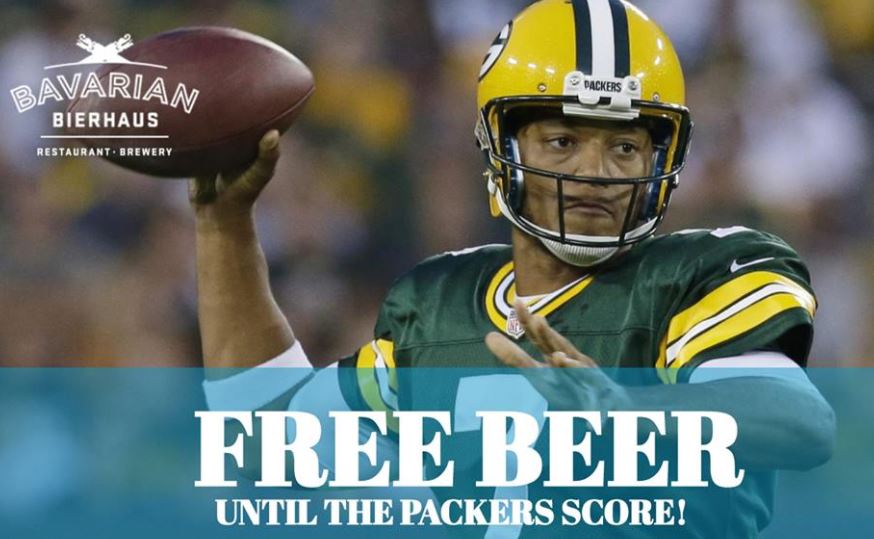 When you host Green Bay Packers games in your brewery, offering free beer until the Pack scores seems like a pretty good idea. The team currently employs Aaron Rodgers, one of the most exciting, accurate, and intelligent quarterbacks of this generation, along with a stable of dynamic wide receivers.

Before he was on the field, the gun-slinging master of improvisation Brett Favre lit up the scoreboard at Lambeau Field tossing to guys like Antonio Freeman, Donald Driver, and Sterling Sharpe.

With Rodgers injured though, young Brett Hundley has taken over. At this point in his career, Hundley would never be confused for Rodgers, Favre, or any competent NFL quarterback, really.

However, the folks at The Bavarian Bierhaus in Glendale, Wisconsin, outside of Milwaukee, were undeterred. They offered their usual “free beer until the Packers score” promotion last Sunday.

Per Jess Baker of CraftBeer.com:

Sunday, about two hours before kickoff, the brewery posted to its Facebook page: “You know the drill! #GoPackGo,” along with a graphic saying “Free Beer Until the Packers Score!”

Ouch. If only they had known …

As the game dragged on and the Packers remained scoreless, fans starting leaving classic comments on the brewery’s post.

“You’re going to go out of business!” Matt Hamrin exclaimed. Ron Fronsee asks “Free beer all week?!?!” (I mean, it IS the million dollar question, right?!)

No word if the brewery plans to continue supporting the Pack by giving away free beer, but as of Monday at 2 p.m. ET, the free beer promotion was still front and center on the brewery’s website. I guess we’ll all have to wait and see. The Packers next game is Sunday night against the Pittsburgh Steelers.

The Ravens, of course, shut out the Packers on Sunday, their third shutout of the season so far. I wonder if any Ravens fans happened to wander into The Bierhaus the other day. I hope at least some of those delicious free suds were downed in celebration, and not in woe.