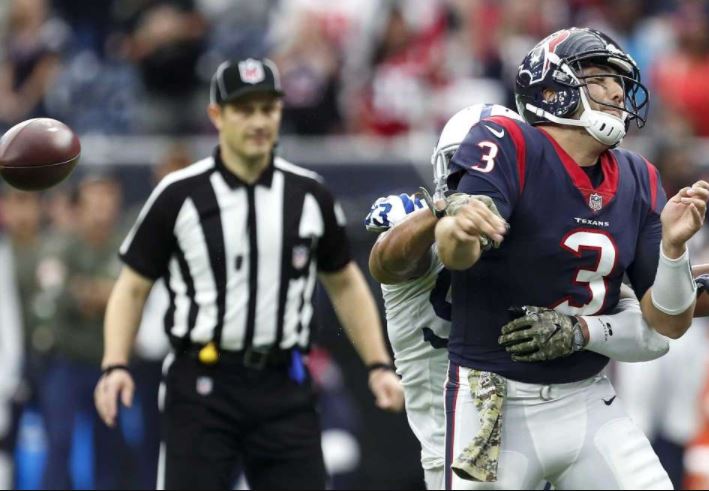 Attack the Off Coverage

As bad as the Baltimore passing attack has been, the elixir could be coming against Houston. The Texans have one of the worst pass defenses in the league – ranked 23rd in yards per game, they’ve given up the most completions over 40 and 20 yards. More on that in a moment.

There are a number of reasons for this development. Injuries have certainly played a part. But Houston has had plenty of problems with their coverage schemes, spacing, technique, and communication.

For instance, the Texans have generally played Cover 4 this season. With this Cover 4 scheme, the outside corners typically play off coverage and allowed receivers to get a free release. To protect the deep sideline routes, the outside corners give up a lot of space underneath. Opposing offenses have gobbled up this coverage all season by running outs, comebacks, hitch routes – routes that look like they’ll go long, only to break off.

The Ravens need to be in attack mode in early-down situations and attack the sidelines. Receivers Mike Wallace and Jeremy Maclin should be targeted consistently on quick three-step drop patterns that are designed to let them use their speed to create separation and come back to the ball underneath.

While the outside area of the field has certainly been favorable for opposing offenses to attack, the middle is where Houston has been lit up for chunk plays. As I mentioned before, this secondary has been gashed. And the common route combination that has worked time and time again is the out and post to the same side of the field.

In the Cover 4 scheme, the safeties and corners will pass off responsibilities to handle the out and post combination to the same side of the field, typically with the safeties handling the shorter routes and the corners handling the deeper patterns – and that’s when there have been breakdowns in coverage.

When the Texans have struggled, it’s when offenses have designed their patterns to draw the safeties up on intermediate crossing or out patterns. Once the safeties move up to jump those routes, the corners are exposed without help over the top.

Getting back to the out route, if the Ravens keep running those patterns in tandem with a deep post or deep seam route to the same side of the field, they’ll have the chance to create opportunities for Wallace and Maclin to get a free release and run straight at the Houston corners with the entire field to work with.

The only way this concept will be successful is if Joe Flacco doesn’t always settle for the shorter gains and keeps his eyes downfield for the big-play opportunity.

Life without left tackle Ronnie Stanley wasn’t exactly wonderful in Lambeau Field last Sunday. Without their blindside blocker, the offensive line was a mess, as they were exposed badly on perimeter pressures. Now, with Stanley on track to be back in the lineup, balance should be restored. Having Stanley means the coaches can devote more blocking help to Austin Howard’s side. However, even if Stanley is healthy, the offense will need a plan to deal with Jadaveon Clowney.

Clowney presents a multitude of problems. He’s got the versatility to line up on the right or left side, and you better believe the Texans will try to get him matched up against Howard one-on-one. Moreover, Clowney can rush inside, and he’s a threat on stunts and twists.

To keep Clowney somewhat contained, Baltimore needs to mix up their fronts. Along with the traditional chip blocks from their tight ends, the Ravens need to use more unbalanced looks and bring both tackles together to Clowney’s side. They should also substitute an extra offensive lineman onto the field to help the tackles wherever Clowney lines up.

Lastly, boot action away from Clowney’s side should hopefully help to slow down his backside pursuit. 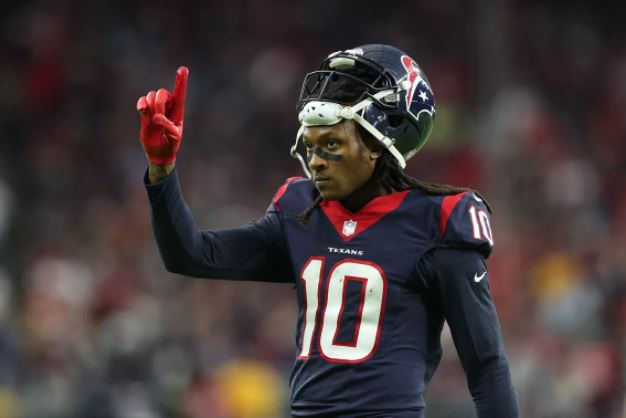 You really have to admire the season DeAndre Hopkins is having. He’s the only game in town with WR Will Fuller being out for the second straight game. When Deshaun Watson went down with an ACL tear, Fuller essentially became a glorified decoy, yet Hopkins continued to get targets and make plays with Tom Savage at QB. No defense has had an answer for the elastic playmaker.

The Ravens are equipped to handle Hopkins. Between Jimmy Smith and Marlon Humphrey, defensive coordinator Dean Pees will rely on both sideline erasers to handle Hopkins on the left side of the field, where he typically lines up. In instances when Hopkins moves to the right side (which isn’t often), Pees needs to make sure he isn’t matched up against Brandon Carr, who was supplanted by Humphrey as the starting corner last week.

This is the type of matchup in which safety Eric Weddle should be involved to shade to Hopkins side. Typically, in matchups against elite receivers (A.J. Green, Antonio Brown), Weddle will team up with Smith to take away the deep ball, and they’ll need to do the same against Hopkins. Taking away the deep sideline routes means Hopkins will have room on slants and in-cutting routes – but that’s better than the alternative.

Against Brett Hundley in third-and-long situations, Pees mostly relied on his front-line defenders to get after the young QB and protect the back end. The favorite sub-package front lineup consisted of Terrell Suggs and Matt Judon as the outside rushers, with Za’Darius Smith and Willie Henry as the defensive tackles.

In situations in which Pees didn’t rely on the front line to get it done, he exchanged rushers, but didn’t bring more than four or five rushers at a time. Part of that plan stemmed from the deep ball capability of the Packers and Hundley’s ability to make plays out of the pocket.

With Savage, there is no fear of either element. Savage is a pure pocket passer and doesn’t throw well on the run. Force him to move and scramble, and you have all the makings of a turnover on any given play. Moreover, is amongst the lowest-rated QBs in the league on passes 15+ yards downfield. Without Fuller, he’ll have his work cut out for him even more.

Pees should take more chances in obvious passing situations and cut his blitz loose up the middle to force Savage to slide to the outside of the pocket. He should mix in rushes from his backers and DBs along with using stunt and twist action to test the Houston interior line. The key to bringing more pressure up the middle is not letting Savage complete passes over the middle, behind the blitz, where he’s much more comfortable as a passer.

Pees will be awfully familiar with the Texans’ offense since it is the same system New England operates. Bill O’Brien has obviously tweaked a few things here and there, but for the most part, the philosophy of the offense remains the same. Many of the chunk plays that Houston aims to generate come from play-action, whether that’s from the gun or from under center. First down is a key down for orchestrating a shot play.

The shotgun runs are especially difficult to defend because the Texans run the ball plenty from shotgun spread looks. Lamar Miller is an effective offset shotgun runner, so the linebackers have to respect him.

All in all, the backers and defensive backs need to read these fakes and rely on the front to sniff out the run before they pounce. They’ll need to stay composed and disciplined with their intermediate coverage responsibilities.

Johnson is on track to play after leaving last week’s game against Cardinals with a concussion. He’s not having the best season due to inconsistency and injuries. This may be his last shot to maintain his footing as a starting cornerback. He’s at his best when he can play close to the line of scrimmage, but in Houston’s scheme, he’s struggled to handle coverage duties in space. Wallace has the speed to set up Johnson on double moves, and he’ll have the chance to gain separation on comebacks and stop routes along the sidelines.

What will happen tonight when the Ravens host the Texans at M&T Bank Stadium?