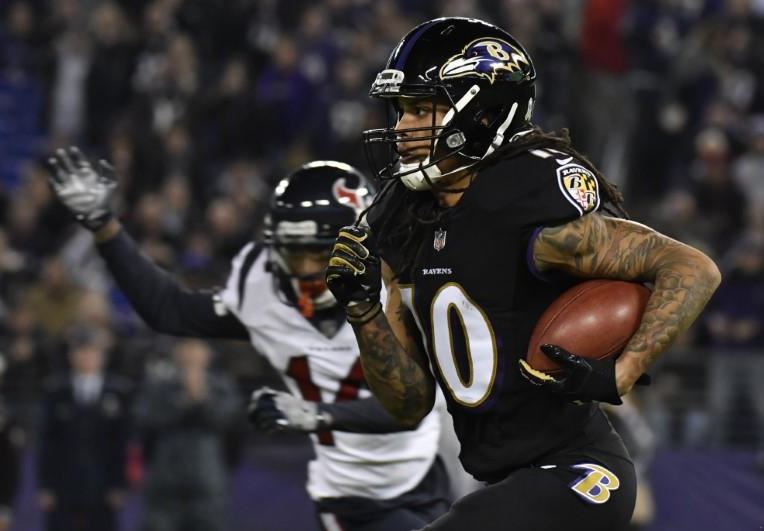 When the Ravens control their own destiny, fans have to prepare for the worst. For whatever reason Baltimore likes to make it hard on themselves (and their fans). For Week 12 at least, they did what they needed to.

With last night’s win the Ravens move to 6-5 and, with the tiebreaker over Buffalo, take the last wild card spot.

Let’s take a look at how each group contributed to the win.

It was a very meh performance for Joe Flacco. I’m sure readers are sick of seeing it every week, but it’s another game that just has so many factors that make it hard to blame Joe too much.

Joe had some bad plays, as he always does, including a poorly thrown ball to Breshad Perriman on a crossing route. However, if you go back and watch the play, the route distribution between Nick Boyle and Perriman was just bad and that comes down to design.

The unfortunate thing is, Joe, once again, had some good balls that were dropped. Joe threw up a deep bomb to Mike Wallace along the sideline. It was beautifully placed in the right spot for Wallace to go up and get it. And yet, instead of going up, he waited for the ball and it hit him in the facemask and he dropped it.

This is the story of the 2017 season for Flacco. His inconsistencies combined with a poor offensive design, dropped balls and zero flow. It’s unfortunate, to put mildly.

Alex Collins used back-to-back runs of 29 and 8 yards to find pay dirt in the 2nd quarter, but outside of those two attempts he had 23 yards on 14 attempts.

Like Joe, it’s hard to blame Collins too much. For some reason the Ravens keep trying to use the stretch, zone blocking scheme and it just does not work.

When they man block you see effectiveness. Collins is not a zone blocking back. Designate a hole for him, and give him some room and he can make guys miss. In a zone blocking scheme you want a more patient runner who can burst into the open hole. Our line can’t open holes and that just isn’t Collins’ game.

Buck Allen also found the end zone and finished with 15 yards on 5 carries.

Ravens fans would like to see more of a “bell cow” approach with Collins. Collins out-touched Allen with 16 carries and 2 catches vs. 5 carries and 1 catch, but it would be nice to really establish the run game in that man blocking scheme.

Wallace’s drop has already been mentioned and it should also be noted on a crucial conversion for a 1st down, Wallace bobbled the catch, but to his credit he still caught it.

However, the gripe this week is with Jeremy Maclin. On a deep ball to Maclin, for whatever reason, he just pulled up on the route. On another play Maclin turned the wrong way to the ball.

We should give credit to the offensive line for adjusting to Jadeveon Clowney’s early dominance. He didn’t make too big of an impact after the first quarter. Ronnie Stanley did a very good job against him and thank goodness Stanley was able to come back into the game after a potential knee injury.

Flacco was sacked just once and for the most part he wasn’t running for his life.

Another backup QB, another strong performance. It’s the story of the 2017 Ravens defense.

Defensive Line and Edge Rushers: A-

Terrell Suggs, the ageless wonder, has been a beast this year. He’s adding to his Hall of Fame resume and finished the day with the only 2 sacks, including a strip sack that Willie Henry recovered.

The run defense was quite solid, holding the Texans to 66 yards on 25 carries (2.6 average) and forced Tom Savage to throw the ball. The defensive line did a good job controlling the line of scrimmage to prevent any holes.

Patrick Onwuasor and C.J. Mosley combined for 20 tackles, but unfortunately there’s no stat tracking missed tackles. It would not bode well for Mosley.

Interestingly enough, a discussion occurred yesterday about extending Mosley and paying him the top-5 ILB money that he will want.

It’s hard to justify it and last night provided some examples as to why. Mosley missed several tackles that led to first downs and was just not that good in pass coverage.

The middle of the field has been the weak link for the Ravens defense. Under this soft, vanilla, Cover 2 scheme, the linebackers drop too deep and it makes the short middle of the field ripe for the picking. Mosley and Peanut just have not been good or consistent enough.

Mosley’s ability to force turnovers (and don’t get me wrong he deserves the credit for that) will get him paid and it will most likely be by the Ravens, but it could be an ugly contract if he can’t work out his inconsistencies.

Last week, the grades referred to the DB group as a no-fly zone (and the Ravens are #2 in pass defense so that’s still mostly true). However, DeAndre Hopkins took the secondary to school last night. Hopkins had 7 catches for 125 yards and made Jimmy Smith look like a rookie.

Smith has been an island all year, but there wasn’t much he could do without a double team.

Oddly enough, when Pees did double team Hopkins with Brandon Carr and Tony Jefferson it had positive results, but Pees doesn’t shadow players, so the Texans kept lining up Hopkins against Smith with the other Texans receivers on the other side of the field out in the trips formation.

The Ravens had to choose between doubling Hopkins and moving the safety over or defending the trips. I think Pees chose to cover the trips too much and that resulted in the repeated big plays to Hopkins.

However, the secondary sealed the game and took away two balls from Savage with picks by Jefferson and Anthony Levine. Solid day outside of Nuk doing work against Smith.

Justin Tucker is just….phenomenal. He was 3/3 on FG’s and connected on a 53-yarder that had another 10 yards, at least, underneath it.

Chris Moore continued his dominance on special teams with solid kick returns and a beautiful catch on the fake punt from Sam Koch for 22 yards.

Sadly enough Koch’s pass was the nicest pass of the night….

The ageless wonder, Terrell Suggs. He’s up to 9.5 sacks and 4 forced fumbles on the year. The man is just not slowing down.