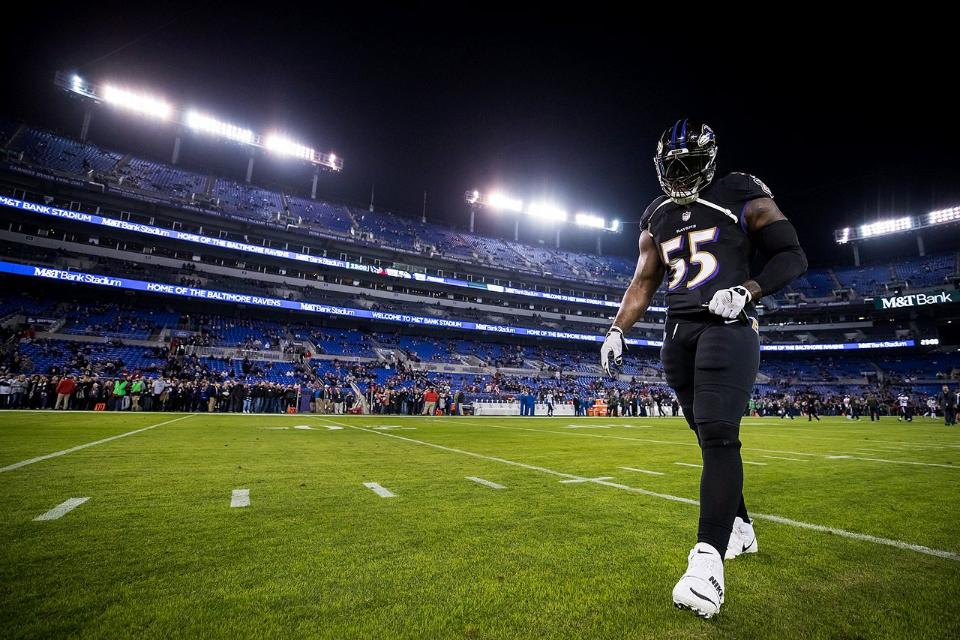 Things sure have changed a lot for the Ravens – seemingly overnight. There was a time when playing before a national audience under the spotlight of Monday Night Football, wearing all-black unis, while fighting for a playoff spot in late November, would inspire a raucous, sold-out crowd.

The noise would be deafening. It would disrupt opposing offenses, limit their playbook and trigger drive-disrupting false starts or delay-of-game penalties. Not anymore.

Surely Steve Bisciotti noticed. How could he not?

Perhaps he’ll blame the civil unrest in crime-infested Baltimore for the empty seats; maybe the player protests will share in the blame. Oh, and it was a Monday following a long Holiday Weekend, and my God do those concessions seem expensive for a thinned-out wallet on the heels of Black Friday and Cyber Monday.

Excuses, one and all.

Perhaps they are somewhat legit but let’s be honest, if the Ravens played an exciting brand of football that heightened the fan experience at M&T to the point where it was a must-see-live-event, people would ignore the peripheral obstacles. People would come.

People would most definitely come.

But that’s not the case with the Ravens. Their formula has changed. It is a bland, boring brand of football, and when it is weighed against all of the aforementioned deterrents to attendance, and the comfort of watching from home without the late-night traffic delays, Bisciotti shouldn’t be surprised by the turnout.

All that said, however painful on the eyes, the Ravens got the win and secured their spot as the AFC’s sixth-seed for another week. And if you can take Joe Flacco’s words at face value, and there’s really no reason not to, expect more of the same from Marty Mornhinweg’s unit.

“I think it’s kind of our game plan; we’re winning games like it. In order for us to definitely take it a step further – we can win like this – but it’s not the easiest way to win. Going out there and playing offensive football, you put yourself to make mistakes, and to do things that are bad. A lot of times we end up playing games like this.” ~ Joe Flacco following the Ravens 23-16 win over the Texans

That’s a philosophical, team approach, and you have to believe these are the teachings of the Harbaugh Family. It’s melba toast. Who gets excited about melba toast? 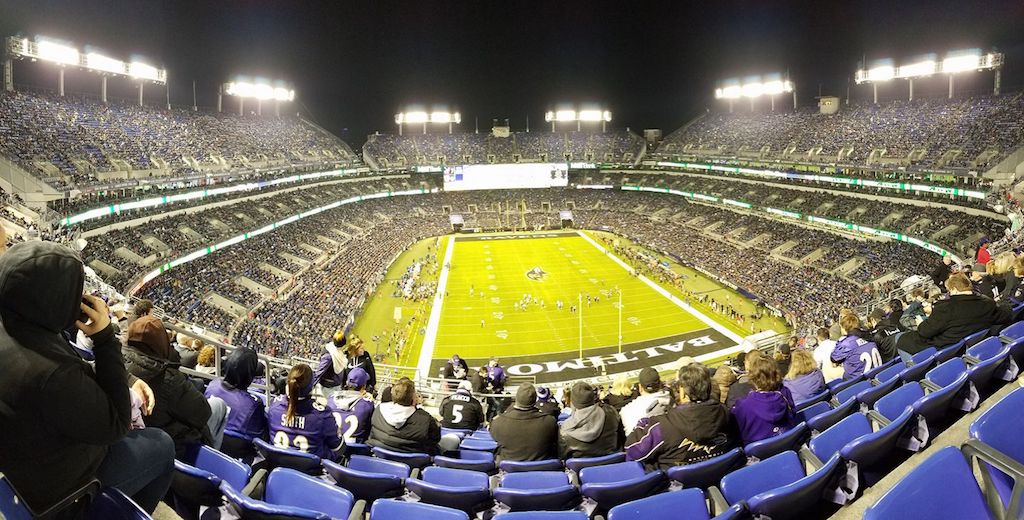 After a sluggish start stemming from Jadeveon Clowney moving across the defensive front, offensive line coach Joe D’Alessandris and senior offensive assistant Greg Roman made a few adjustments to account for the Texans disruptive defender. The line settled down and gave Joe Flacco ample time to set and throw. On the night Flacco was hurried during just 7 of his 36 drop backs, according to PFF. Both tackles, Ronnie Stanley and Austin Howard had solid games in pass pro…Alex Collins willed himself to 60 yards on 16 carries, including a touchdown to put the Ravens up 14-7. Both he and Buck Allen continuously pumped their legs until they’re dropped. Allen’s 10-yard TD run was straight out of Hollywood, featuring big time assistance from the O-Line and tight end Maxx Williams. Both Collins and Allen did a nice job of chipping on Clowney later in the game.

Willie Henry effectively pushed the pocket while keeping his hands busy, disrupting Tom Savage’s sight lines. He contributed 3 tackles, a pass defensed and the key fumble recovery to help preserve the win…Brandon Williams and Michael Pierce were instrumental in keeping Lamar Miller in check (17 carries, 51 yards, 3.0 YPC)…Patrick Onwuasor was physical at the point of attack, with 8 tackles and a key blocked pass to destroy a developing Texans screen…Down 14-7, the Texans faced a first-and-goal from the Ravens 8 with 2:14 to play in the first half. Three plays and 22 seconds later the Texans were force to kick a field goal. Before the half ended the Ravens answered with a FG of their own to head into the locker room up 17-10, all jumpstarted by that effective red zone stand.

Special teams were outstanding save Chris Moore’s poor decision to return a kickoff from 6 yards deep which forced the Ravens start their final drive of the first half from their own 17…Sam Koch punted 6 times netting 47.8 yards, pinning the Texans inside their 20 five times with an average start of the 12-yard line. The battle for field position was won by the Ravens in large part, due to Koch’s efforts. He also connected on a pass to Moore for a 22-yard gain to keep a second-quarter drive alive and set up the Ravens first score of the game…Justin Tucker was flawless, connecting from 53, 31 and 49…Winning the battle of turnovers (3:0) was also a huge factor in the win. 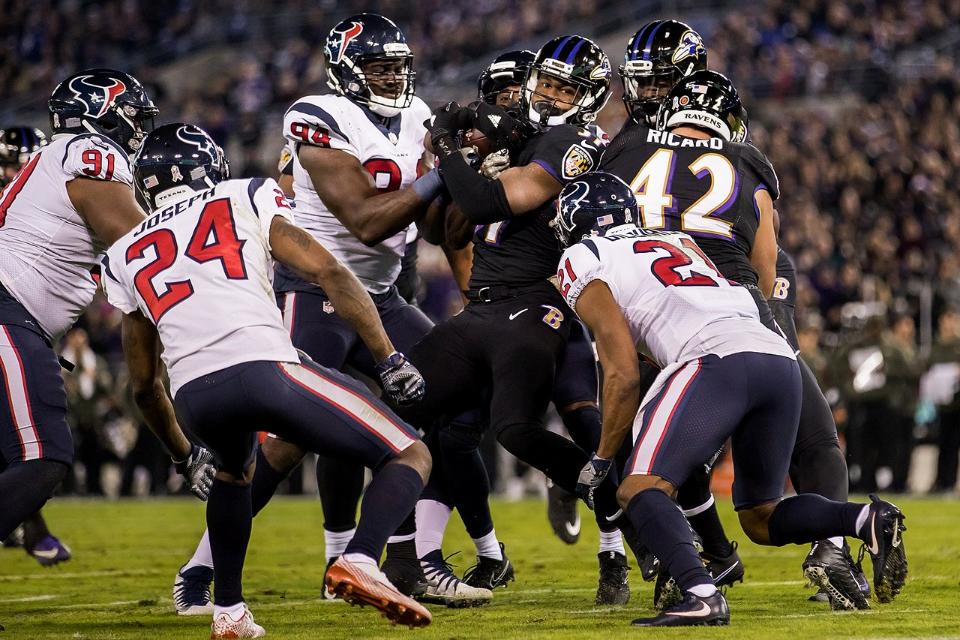 The Flacco check downs continue. I counted 4 shallow check downs that were completed for a total of 1 net yard gained. There was a fifth check down that was incomplete and despite the pass being thrown just beyond the line of scrimmage, the receiver was double covered. Think about that…Converting third-and-10 or more has become the impossible dream for Marty Mornhinweg’s offense. They are currently on a 0-for-26 streak…Flacco misfired badly on a couple of deep throws, threw late to Breshad Perriman on a back shoulder down the right sideline on a 3rd-and-6 from the Houston 41 and he threw late on a few occasions to sideline targets that ran out of real estate to make a play in bounds. To his credit, Flacco protected the football and in the end, that was one of the keys to victory. But that’s a small consolation prize from a player who is a franchise quarterback only by virtue of his W-2.

Facing a 3rd-and-5 from their own 36 at the 11:09 mark of the third, Mornhinweg called for a 9-route down the left sideline. Mike Wallace should have corralled the pass which would have resulted in a 41-yard gain. These are the types of plays good offenses finish. DeAndre Hopkins makes such catches look easy. That said, a higher percentage play was in order given the game situation and a 17-10 lead…Jeremy Maclin was mostly MIA and his overall effort leaves much room for improvement…Perriman remains nothing more than a decoy. He should float atop the Eastern Shore waters during fowl season. In 10 games this season Perriman is averaging just 5.4 receiving yards per game more than me.

You have to question the defensive strategy to stop DeAndre Hopkins who finished with 7 catches for 125 yards and he drew a couple of PI’s to boot. You would think that Dean Pees would bracket one of the NFL’s best receivers but too often he was in man coverage without help over the top. There were times when Eric Weddle seemed late in support and when he wasn’t on time for the Hopkins party, Weddle was too often caught in the wash during failed blitzes. Why Pees opts to blitz Weddle more than Tony Jefferson is a mystery. Jefferson is far more effective. It’s not even close…Mosley missed a couple of tackles, one of which helped to set up a Texans field goal…The roughing the passer call against Maurice Canady was ridiculous. He hit Savage with his shoulder at the waist. Fortunately, it didn’t impact the outcome of the drive. The Ravens held in the red zone and forced a field goal…John Harbaugh’s challenge was an act of desperation and cost the Ravens a timeout. Who in the booth is influencing these challenges that are DOA?…Matt Judon, what were you thinking when tossing Braxton Miller to the ground like a rag doll after the whistle?

The Ravens were a wretched 3-of-14 on third-down conversions…They had 7 penalties for 89 yards, five of which resulted in Texans first downs. Jimmy Smith and Brandon Carr took turns struggling to stop Hopkins. Smith was flagged twice while defending the Texans gifted receiver, once for pass interference (26 yards) and another time he was called for holding that was declined. Carr was flagged three times during futile attempts to cover Hopkins, one a 19-yard PI and two holding calls, one of which was declined…The Texans’ opening 90-yard drive included 39 penalty yards against the Ravens…The Ravens had just 113 yards of offense in the second half helping to secure their spot as the 31st ranked offense overall, and the 32nd ranked passing offense. By the way, there are only 32 teams in the league. 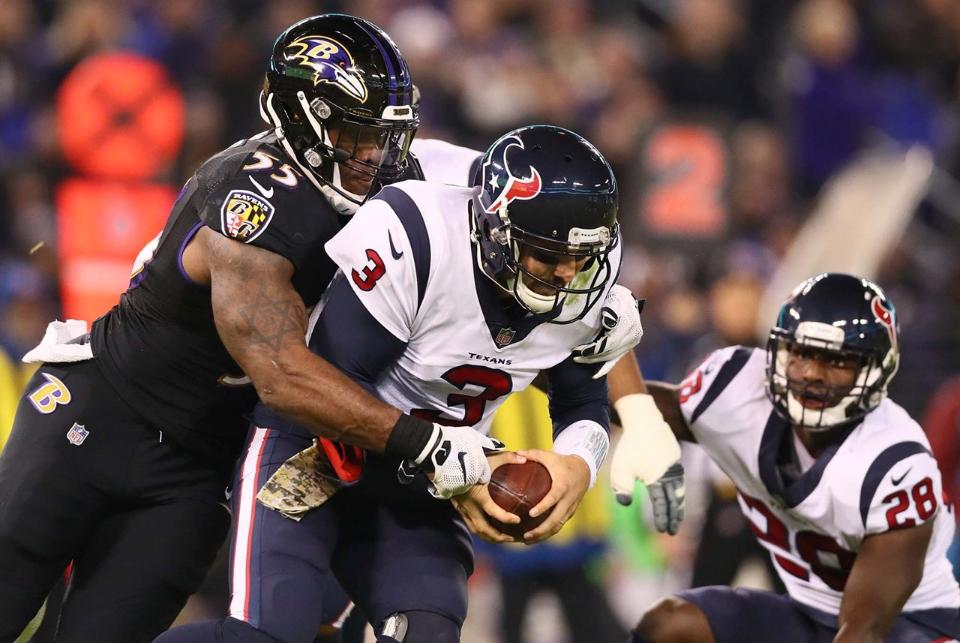 He’s the elder statesman of the team and its leader. At 35-years-old he’s playing like someone much younger. On the season, he’s 8th in the league in sacks and last night, he provided a statement game that says his career is far from finished. During this Monday Night affair, Terrell Suggs earned his moniker of “Sizzle”, chipping in with 2 sacks, 3 QB hurries, a tackle-for-loss, a batted pass and a forced fumble that thwarted a Texans comeback effort while the visitors were down by just four and facing a first-and-10 from the Ravens 44 with 4:56 left in the game. Each week he continues to build his case for a gold jacket and a bust in Canton, Ohio.