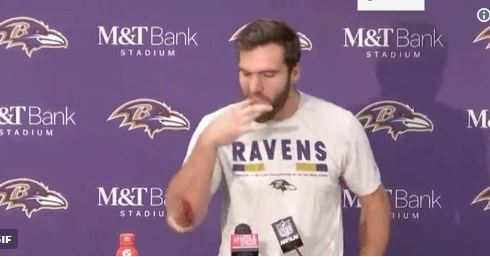 Joe Flacco had his best game of 2017 in Sunday’s 44-20 win over the Detroit Lions, going 23 of 36 for 269 yards, two touchdowns, and no turnovers. The 7.5 yards per attempt was his best of the season (two full yards above his season average) and his 105.0 rating was second to just the Miami game in Week 8 when he threw only 15 passes.

In his post-game presser, Joe was feeling a bit…animated, choosing to imitate Tampa Bay’s Jameis Winston by “eating a W.”

Joe Flacco started off his post-game presser imitating Jameis Winston's "eating a W" gesture. Said he was dared to do it. Can't say I anticipated seeing that. #Ravens

Ok, so what exactly is that? For those not familiar…

Joe Flacco is many things, but if you call him boring, you’re not paying attention.