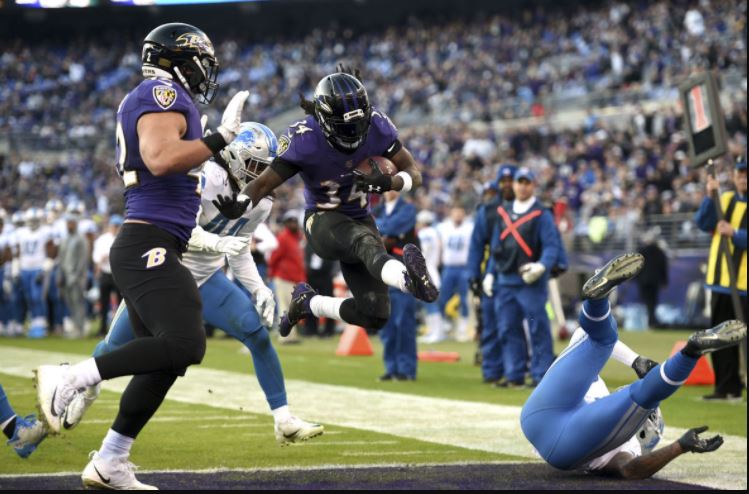 Quarterback Joe Flacco can sometimes appear aloof or indifferent to the criticism surrounding the Ravens’ offense.

In reality, Flacco fully understands the fans’ frustration and does take responsibility after a subpar performance. That’s why it was so refreshing for him to finally bail out the defense Sunday against the Lions.

After the Ravens opened a 20-point lead at the half, Detroit rallied in the third quarter with three touchdowns.With the defense on its heels, Flacco and rest of the offense pulled away by tying a franchise record with 24 fourth-quarter points.

Was this an aberration of the beginning of a remarkable turnaround? Flacco is confident that unit finally turned the corner.

“Part of what we do is dealing with stressful situations and people saying that we’re not good enough,” Flacco said. “So, no, I’m not relieved. I feel good that we won a football game because we went out there and played well. It’s not relief. There’s not much better [feeling] in the world than winning a football game. We know how hard it is each week. We’re doing the most we can.”

Baltimore took advantage of a Lions that defense that was ranked in the bottom third of the NFL. Flacco has his best game, going 23 of 36 for a season-high 269 yards with two touchdowns. Mike Wallace was also a force with 116 yards on five receptions.

The Ravens have won three consecutive games for the first time since the beginning of the 2016 season and improved to 7-5. Baltimore currently has the sixth and final spot in the AFC playoffs, but have the opportunity to overtake the fading Kansas City Chiefs.

The Ravens are playing their best football to date.

“It’s late in the season; it’s December,” Flacco said. “We pride ourselves on playing good football in December. It hasn’t been ideal to this point, but we have set ourselves up to the point where we are playing meaningful December football, and that’s one of the goals at the end of the day.

“We’re going to continue to do that, and yes, a game like this, late in the year versus a team that’s also trying to make a push for the playoffs, can definitely do a lot for our confidence.”

Even with the latest offensive output with the passing attack, the Ravens still need to establish a strong running game.

The team ran effectively against the Lions with 101 total yards on 27 carries. Once again, Alex Collins showed solid burst and finished with 75 yards and two touchdowns. However, he suffered a migraine after the game, but that should not affect his availability this week.

On the downside, the Ravens lost cornerback Jimmy Smith to a season-ending torn Achilles. Nonetheless, Baltimore should have enough depth to absorb that loss. Smith was also reportedly suspended four games for violating the NFL’s policy on performance-enhancing substances.

“Our secondary is the strength of the team,” Ravens safety Eric Weddle said. “We’re not going to feel sorry for ourselves.”

Baltimore faces another touch matchup Sunday first-place Pittsburgh in Week 14. The Steelers are 9-2 and are running away with the division. It’s not a must-win game for the Ravens, per se, but they definitely want to send a message to their division rival and add to their recent confidence. Even with a loss, Baltimore could finish the season with 10 victories.

The Ravens enter that game fully expecting to win, despite being seven-point underdogs.

“Every game is going to play out differently,” Ravens coach John Harbaugh said. “Next week is going to be a different game than this week. We have to find a way to win the next game, using all three phases. A little bit better at this time of year goes a long way. If you continue to improve in every area, just a little bit, it will pay off for us.”