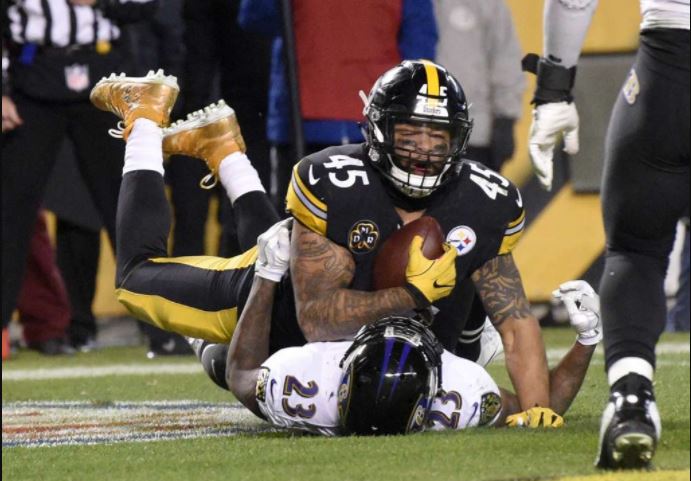 Well by now the fans have taken to the streets with their “Fire Pees” and “Fire Harbs” signs.

Let’s break down where the contributions were in this loss.

The Flacco Report: B+

Let’s get the ugly out of the way. The INT on the first drive may be one of the worst passes I have seen from Joe Flacco. Jeremy Maclin was breaking down the seam and all it needed was some air to give him a chance and it was just drastically underthrown.

However, Flacco rebounded quite nicely. He finished 20/35 for 269 yards and added 2 TD including a nice strike to Chris Moore and a short pass to Patrick Ricard in the flat.

Most notable of Joe’s performance, and the reason Joe gets the B+, is because of the pass to Jeremy Maclin in the final 30 seconds. That was a beautifully thrown ball. With the Steelers guarding the sideline, it had to be thrown outside, and Joe did just that.

But, as we’ve seen time and time again over Joe’s career, the receiver just can’t get it done for him (a la Lee Evans).

Starting the season, many would have argued that RB was a top need for this team. However, Alex Collins has turned everyone into a believer and what an output he delivered.

Since the bye, Collins has scored in every game and hasn’t been below 60 all-purpose yards. The guy can be a #1.

Buck Allen also gets credit for grabbing 2 TD and one of the unsung heroes on offense tonight was Patrick Ricard. He had us wondering if Vonta Leach was back out there, while adding a TD reception.

When Jeremy Maclin was acquired in the offseason, there were some legitimate debates that he was the best pass catcher Joe has had during his career here. This has really blown up in all of our faces.

Maclin has not lived up to the hype and through 14 weeks he still can’t seem to get on the same page with Flacco. The sideline catch that would have put the Ravens in field goal range is not an easy catch, don’t get me wrong. However, it is a catch that a #1 WR makes and Maclin is not that.

Mike Wallace and Chris Moore showed up to play and it’s a shame that Moore got hurt. Wallace maintained his big play ability and drew some pass interference to move the ball for the good guys.

The tight end group is almost completely useless at this point. Did we seriously line Nick Boyle out wide and try and get him to make a move? WR and TE are MASSIVE areas of need.

That was the best game we’ve seen from the offensive line this year. They were absolutely in beast mode.

It cannot be emphasized enough how much better the run blocking scheme is when they use a power man blocking scheme rather than the zone stretch. James Hurst was having a lot of success pulling in that power scheme and Collins was getting some holes to exploit.

In pass protection they were perfect for the majority of the game. Most of the time Flacco had lots of time to set his feet and make a throw.

Matt Skura has proven to be a pleasant surprise and if Hurst walks in the offseason at least Skura can compete with Alex Lewis for that LG spot. 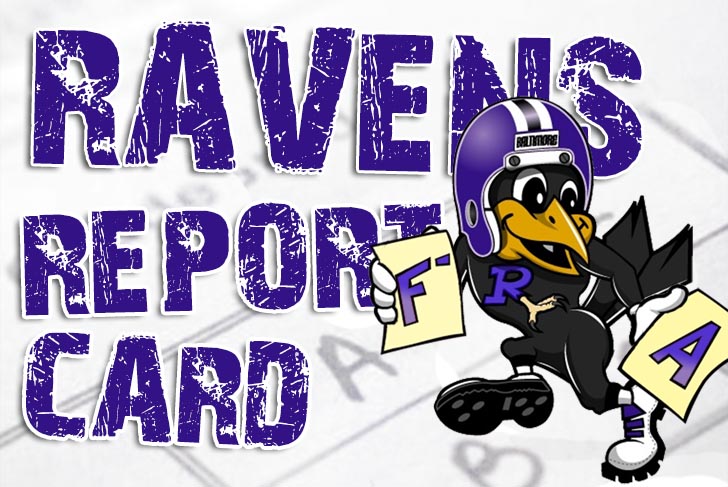 Yup, the defense gets an F. That was flat out the worst performance from this defense this year. Roethlisberger finished the day with 506 yards passing including 213 of them going to Antonio Brown.

The defense managed to take Le’Veon Bell out of the game on the run, but the Ravens had zero answer for the passing game and Bell still managed to rush in 2 scores.

Flat out, it was a pathetic performance.

The interior defensive line deserves some credit as they managed to slow down Bell on the ground and only gave up 59 total rushing yards. You can’t complain about that. I would give their run defense an A-.

However, there was a complete and utter lack of a pass rush. The Ravens ended up with 3 sacks, but that doesn’t tell the story of the complete lack of pressure. Ben had all day back there and the Ravens did nothing to get anything going. I give their pass defense an F.

Dean Pees has got to come up with something more to get them going.

We must have a conversation about C.J. Mosley. I took some heat last week for suggesting that he isn’t worth top 5 ILB money that he will surely demand this offseason.

Mosley does get turnovers and that is a fact that makes him an above average ILB. However, he is a complete liability in coverage.

If it was Rob Gronkowski having a big game then it would be a little more understandable. However, Mosley just got his behind handed to him by Vance McDonald and Jesse James. James caught 10 balls! McDonald added another 4.

There was a common person involved in these plays and it was Mosley being in coverage against them. To be a top ILB in 2017, you must be able to cover the pass.

Pees deserves a good chunk of the blame, but we’ll get into that in the coaching section.

Just like we saw with DeAndre Hopkins, this team has an inability to shut down top receivers. For whatever reason, Pees won’t shadow the other team’s best receiver. The Steelers took advantage by lining Brown up against Brandon Carr who was a liability several times including the play that got the Steelers into field goal range to take the lead.

Marlon Humphrey had a fantastic game and stuck like glue to Martavis Bryant. Bryant had 6 catches, but only 33 yards.

Tony Jefferson’s acquisition has not yielded the results that fans expected. Simply put, he just has to be better. It’s unacceptable. Allowing that TD throw to Roosevelt Nix basically sums up his time as a Raven.

Add in that fact that Eric Weddle has declined a bit and cannot seem to tackle…. it’s not looking good for the highly paid Ravens safety duo (yes, I do know Weddle has 5 INT).

Not much to report in this aspect of the game. Michael Campanaro had a nice 40-yard return and Justin Tucker was perfect as always.

You just can’t help but picture him making that game winning kick if Maclin keeps his feet in bounds….

Yup, we went as low in the alphabet as we could go.

Last night’s coaching display was very bad. Marty Mornhinweg had a fantastic first 3 quarters. It’s very hard to find holes in his game plan. Even being down 14 he stuck with the run game and turned it around. Props there.

The Ravens offense in the 4th quarter benefited from a 40-yard return from Campanaro and a 20-yard pass interference call to lead to the Buck Allen 9-yard TD run. However, two costly 3 and outs that involved way too many passes when you’re trying to kill the clock just sunk the Ravens. The real culprit was not Marty though. It was everyone’s favorite defensive coordinator…

How in the world do you not double team Antonio Brown with 1 minute left in the game? Ignore the fact that he’s already put up 150+ yards against you, but he’s undisputedly a top 3 WR in the NFL. It was absolutely unacceptable to leave Carr on an island with him as much as Pees did tonight.

He did provide the corners with some safety help over the top with Weddle and even Levine dropping from the dime corner spot to play deep on a couple of looks. However, he managed to not do it during the most important drive of the game and it lead to another 4th quarter blown lead, which basically summarizes his last 4 years as DC of this team. The front office rebuilt the defense specifically to avoid another scene like we saw last year in Pittsburgh. Nearly a year later, and it was a near carbon copy with the same result. Pees was given every asset possible, and yet it happened again. Pees should have been fired a long time ago, but now he HAS to be fired.

We know that isn’t happening, so all we can do is hope Pees retires.

My game ball today goes to the Irish dancer himself, Alex Collins. He was truly Beast Mode 2.0 tonight. Honorable mention goes to Patrick Ricard for reminding me of how much I miss Vonta Leach.