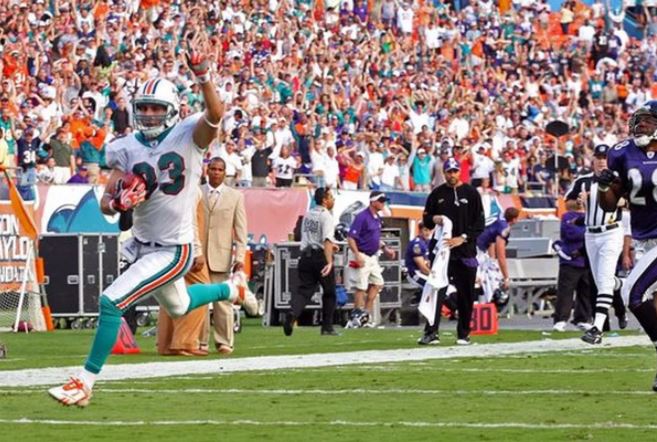 The Ravens endured one of the most embarrassing days in franchise history on Dec. 16, 2007.

On that afternoon, Baltimore was playing the winless Miami Dolphins and had a chance to earn the victory in the final seconds with the ball on the one-foot line.

Instead, coach Brian Billick settled for a field goal that sent the game into overtime. The Ravens lost 22-16 when Greg Camarillo beat Ed Reed for a 64-yard touchdown pass from quarterback Cleo Lemon.

Baltimore finished the season 5-11 and Billick was fired.

The Ravens (7-6) face another winless team Sunday in the Cleveland Browns. The stakes are much higher than in 2007. Baltimore very likely needs to win their final three games to avoid missing the playoffs for a third straight season.

As a result, the Ravens are not underestimating the Browns, who are still playing hard despite their 0-13 record.

“These guys, they are good athletes,” Ravens running back Alex Collins said about Cleveland. “No team steps on the field expecting to lose, so I definitely know they are going to be coming for us, and we are just going to do the same thing going into this game, preparing how we prepared for those guys. We already watched the film, watched the mistakes, and we are just going to keep trying to improve and try to get the ‘W’ this weekend.”

The Browns have a tough, young defense that could give the Ravens some problems.

Rookie defensive end Myles Garrett is looking like he could be a force for years to come. Despite missing five games, Garrett is tied for third among all rookies with five sacks. He has also registered 24 tackles.

Garrett did not play in the Ravens’ 24-10 victory in Week 2 at M&T Bank Stadium. He could be a difference maker this time around. Baltimore coach John Harbaugh has been impressed watching tape of Cleveland.

“They’ve lost some players – that’s hurt them – but they have Garrett back. He’s a factor on defense,” Harbaugh said. “They’ve really solidified under [defensive coordinator Gregg] Williams, what they’re doing on defense. They have the package; it’s a very tough package.

“They’re executing it really well. They’re No. 1 in the league against the run. Run defense-wise has done a great job with that. It’s structured, but it’s also … They’re physical; they play really hard. They run to the ball really, really well. It’s a very hard-playing defense.”

The Browns are ranked sixth against the run, but 21st against the pass. This should create some opportunities for quarterback Joe Flacco and a revamped Ravens offense.

Baltimore has scored 82 points in the past two games and moved up three spots in total offense from 30th to 27th.

The Ravens will likely need to jump out to an early lead to dampen the Browns’ spirit. The longer Cleveland hangs around, the more dangerous they could become. The crowd will also get into the game if an upset is brewing.

“We have a lot at stake right now, so we are really just worrying about winning the football game,” Flacco said.

In the first meeting, the Ravens dominated Browns quarterback DeShone Kizer, who threw three interceptions, was sacked twice and lost a fumble. As a result, this game provides an opportunity for Baltimore’s secondary to get back on track.

That unit allowed Steelers quarterback Ben Roethlisberger to throw for 506 yards and two touchdowns in a deflating 39-38 loss Sunday night. Kizer will likely have a tougher time, even with receiver Josh Gordon back in the lineup.

“It’ll be another good challenge for us this week,” said cornerback Marlon Humphrey, who has taken over the starting role for the injured and suspended Jimmy Smith. “Their record doesn’t say much, but their skill players are definitely very, very elite.”

The Ravens can control their own destiny for a spot in the playoffs. Another critical step is taking care of business in Cleveland.

Linebacker Terrell Suggs remembers that infamous day in Miami in 2007 and wants to make sure history doesn’t repeat itself.

“I didn’t bring it up, but maybe it’s something to put in their ear,” Suggs said about that Dolphins game. “We’re competitors. We’re expecting Cleveland’s best shot. We’re not taking them lightly.”