Thanks to the San Diego Chargers laying an egg in Kansas City last night, the AFC Playoff picture looks a little bit better for Baltimore.

If KC wins tonight and takes the AFCW, the @Ravens cannot lose any tiebreaker to a 9-7 team from AFCW. So KC all the way. It's one of the most important games of the year. https://t.co/ivEo9pQ4wO

Even though 9-7 looks like it could very well get them in, 10-6 would be a lot more comfortable. To get there, they’ll need to win their final three games, beginning today against the 0-13 Cleveland Browns.

I was at the game in December of 2007 when the Ravens lost to the 0-13 Dolphins. I’d really rather not repeat that. I’ve heard some fans say they are hoping for a loss today, as it would likely lead to John Harbaugh receiving the same fate that Brian Billick did, after losing to a winless team sealed it.

I don’t buy that. Give me a win today.

Let’s take a look at the stats, quotes, notes, and plenty more to get ready for Ravens-Browns, c/o Casa Mia’s White Marsh. 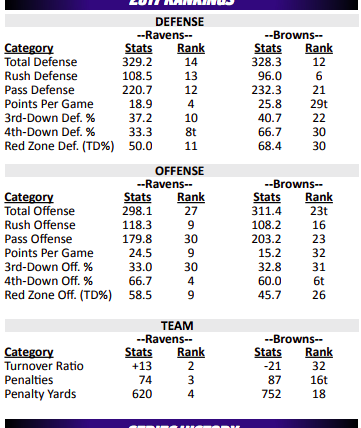 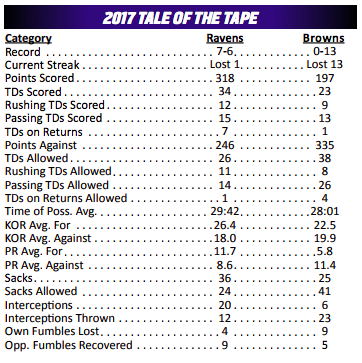 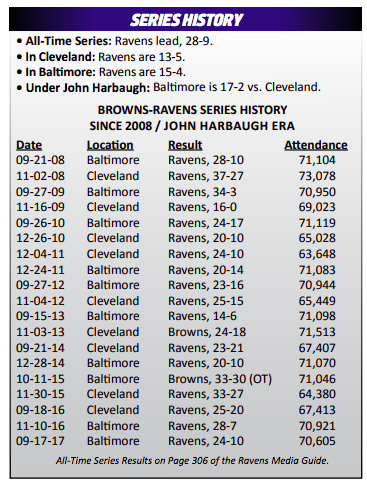 QB Joe Flacco on bouncing back after a tough Week 14 defeat:

“I think we have a pretty short memory around here. I think we’ll be good at [bouncing back]. We better. We better get over it quickly. We have everything we want in front of us. We’ve got to go get it.”

BaltimoreRavens.com’s John Eisenberg on the Ravens’ Week 14 offensive performance against the Steelers:

“It was brilliant, nothing short of that. [Alex] Collins performed like an All-Pro, shedding tacklers and finding daylight as he showed a national TV audience what a find he’s been. The line dominated for a second straight week, opening holes and giving [Joe] Flacco time to throw. An unusual array of guys made plays, including Chris Moore, Javorius Allen, Mike Wallace and Patrick Ricard. It’s been a tough slog for the offense this season, but the unit has finally come together, it seems, with impressive results.”

LB C.J. Mosley on the Ravens learning from their tough, thrilling loss at Pittsburgh last week:

“We didn’t get the result that we wanted. Being in that environment, Sunday night, playing in a rivalry, for a lot of the guys, that’s probably the closest they’ve felt to a playoff game. If anything, it should be a morale boost, I would say. We just have to make those minor adjustments so we can finish close games like that.”

“This is going to sting for a while, especially for the guys on defense, because we care so much, and we hold ourselves to a high standard. Look, we have three games, two of them at home. If we win, we’re going to go to the playoffs with a three-game winning streak and winning six out of seven. Hopefully this will build our character and make us better in the long run.”

“Alex has done a great job. I have been impressed. He is a great story. It is one of the great stories in the NFL this year. It is nice to see when a guy like Alex Collins – who is a great individual and hard worker – gets an opportunity, he is able to make the most of it and have that kind of success. It is something for people who love the National Football League and fans or parents with their kids, you can say, ‘See, you can do it, too.’ That is how I look at it, and he has done a great job.”

GETTING TO KNOW YOU ~ Q&A with Benjamin Watson

When you played for the Browns, what was your perception of the Ravens?

Is there anything you have learned now that you didn’t know from afar?

A lot of young players say you mentor them. Who did the same for you?

“Daniel Graham, who played tight end in the league for 11 or 12 years with New England and Denver. He taught me what it meant to be a pro. He showed me how I could get my body ready and my mind ready. I credit him and Christian Fauria as guys I looked up to.”

Who is the best player you have lined up against?

“Michael Strahan was really good. I had to block him my rookie year, and the first time I saw him, I called my dad and said, ‘I don’t know if I can play in this league.’ Another guy is No. 55 [Terrell Suggs]. As a tight end, he is someone that you have to block, and you have no idea how to defend. He is capable of running over you or running around you. Most guys can do one or the other, but ‘Sizz’ can do both.”

If you could witness one historical event, what would it be?

“I would love to have heard Martin Luther King deliver his speeches. On the flip side, I’m glad I didn’t live during that time, because many of the freedoms blacks have now, we didn’t have at that point. In retrospect, hearing some of the speeches and seeing what he and Malcolm X did, it would have been tough because of the circumstances.”

Is it true that you hold the bench press record at Georgia?

Ravens general manager/executive VP and Hall of Fame TE Ozzie Newsome played 13 seasons in Cleveland. After his playing career, he then held positions as a scout, assistant to the head coach/ offense/pro personnel, and director of pro personnel before moving to Baltimore as VP of player personnel in 1996.

Baltimore ST coordinator/assoc. head coach Jerry Rosburg was the Browns’ ST coordinator from 2001-06, while Ravens D-line coach Joe Cullen held the same title in Cleveland for one season (2013). … Secondary coach Chris Hewitt served as an intern with the Browns in 2001 through the NFL’s Minority Coaching Fellowship Program.

The Ravens’ staff is comprised of many who were invited to join the franchise when it moved from Cleveland: SVP of football administration Pat Moriarty, SVP of public & community relations Kevin Byrne, VP of football video operations Jon Dubé, SVP of operations Bob Eller, VP of IT Bill Jankowski and VP/head certified athletic trainer Mark Smith.

Ravens senior personnel assistant George Kokinis was the Browns’ GM in 2009. Kokinis began his career with Cleveland as an operations intern (1991) and then as a scout (1992-95). … Baltimore director of pro personnel Vincent Newsome played two seasons (1991-92) for the Browns before becoming a special assignment scout for the team from 1993-95.

That’s it. I’m entirely too terrified of this game to laugh at Cleveland.