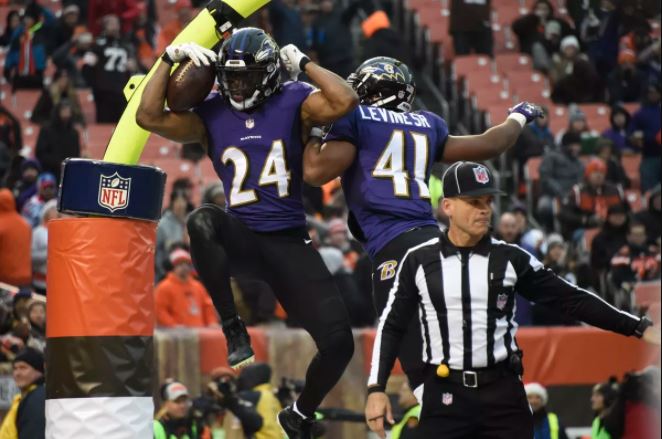 This game had “trap game” written all over it, and early on it was looking like the upset may happen.

However, after failing to convert on a 4th down from the Browns’ 1 and subsequently giving up a TD, Joe Flacco and company drove 75 yards on 11 plays to answer with a score of their own. From there on the Ravens controlled this game. Let’s breakdown how each group did.

The Ravens offense continues to jell at the right time. One thing you have to remember is that the Browns defense is no slouch and the Ravens offense moved the ball with very little protest today.

The Flacco Report: A-

Flacco continues to rally as the 2017 season winds down and it looks like January Joe could be on the horizon.

Ever since Marty Mornhinweg started throwing the ball downfield and strengthening the run game to open up the play action pass, we’ve seen improvement in Flacco’s play and the offense in general.

Speaking of Joe on the ground, the first read option that Joe ran where he didn’t score may be one of the most puzzling calls I’ve seen. This season Joe has suffered a back injury and a concussion. I’m all for smash mouth football, but I don’t want to see Joe going for any more head-on tilts.

All in all, I was very impressed with Joe today. As usual, his receivers left a few plays on the field for him including 2 drops by Chris Moore which would have been first downs.

It was a rare inefficient game for Alex Collins. Heading into the week he sported a top 5 YPC, but today he only found 1.6 YPC. However, he added 5 catches for 33 yards and was still a factor.

On the flip side, Javorius Allen carried the ball 13 times for 70 yards and has looked much better this year. Between Collins, Allen, Danny Woodhead, and Kenneth Dixon the Ravens running back depth looks strong moving forward into the 2018 season.

Ravens fans have to be a little concerned with Collins’ ankle. He did come back in after initially twisting it, but he didn’t look the same. Hopefully he’s healed up for next Saturday’s tango with the Colts.

One thing that should be noted is the run blocking scheme. This team moves the ball so much better behind a man blocking scheme. We saw it several times today, including the 4th and goal where Collins didn’t find pay dirt. When they line up the opposing defensive line and power forward they’re much more successful. Hopefully Marty gets away from the zone scheme. It isn’t working.

The combination of getting Mike Wallace and Benjamin Watson down field was a recipe for success today. Wallace brought in 6 catches for 89 yards and Watson brought in 4 for 74 yards and a score.

The 33-yard touchdown pass to Watson was one of Flacco’s best throws of the season. It was thrown right onto an open Watson on the run and Watson completed the play beautifully for the score.

Moore had a down game in regard to his receiving abilities. He had 2 costly drops and failed to record a catch. His recent development has been positive, so hopefully a bounce back game is in store next week.

This unit had a stellar day in pass protection. Flacco was only sacked one time and was generally given strong protection to go through his reads. The progression this unit has made in pass protection is incredible. To start the season, Joe was scrambling way too often, but now that he’s setting his feet and reading the play he’s having a lot more success and mistakes have been minimal.

Major kudos has to go to Ravens new offensive line coach, Joe D’Alessandris. The unit has also greatly limited their mistakes from a penalty perspective in comparison to the numerous drive-killing penalties they suffered in the 2016 season.

It was a defensive showing that has defined the Ravens defense this year. There were a few big plays and a couple of frustrating drives, but at the end of the day turnovers against a subpar quarterback sealed the victory for the Ravens.

Defensive Line and Edge Rushers: B-

The defensive line did a solid job against the run today, but their grade takes a hit due to the big plays given up. After turning the ball over on downs on the goal line, Isaiah Crowell broke the first play of the Browns drive off for 59 yards. A second big play on this drive was the 12-yard touchdown run by Duke Johnson on which he went across field against the entire Ravens defense.

The pass rush was not very consistent today, but they were able to shine at times, particularly on Za’Darius Smith’s strip sack that Brandon Williams recovered for a touchdown. Matthew Judon also got home on another sack that made for his 7th of the season.

Speaking of Judon, this guy has really developed into an every down linebacker. He had 6 tackles on the day including 3 for a loss and was very solid.

C.J. Mosley had a fantastic bounce back performance, especially in coverage. He had 3 pass deflections, which is fantastic to see after he got beat by the Steelers tight ends like he stole something.

Mosley also joined forces with Tony Jefferson to force a Duke Johnson fumble that led to the Benjamin Watson touchdown to end the first half. Mosley’s pass coverage is certainly under the microscope, but there’s no denying his ability to make plays and force turnovers. He has 3 forced fumbles and 2 interceptions on the year.

Patrick Onwuasor also had arguably his best game as a Raven today. He looked much more in position and showed very strong tackling skills. Hopefully a sign of things to come from the young undrafted free agent.

I won’t lie, I predicted a Josh Gordon torching today. After seeing DeAndre Hopkins and Antonio Brown recently light up the secondary, it was a big concern. However, Brandon Carr did a phenomenal job against Gordon and bounced back nicely after being thrashed by Brown last week.

Carr had strong position on Gordon and held him to 5 catches for 57 yards.

DeShone Kizer only gained 146 yards against the Ravens secondary and threw 2 awful interceptions in the process. Eric Weddle notched his 6th of the season and Brandon Carr brought in his 4th.

Fun fact for Brandon Carr: coming into this year he had a total of 15 career interceptions over a span of 144 games. He has 4 through 14 games this year and has matched his career high with 2 games to go.

There is no denying the ball hawking abilities of this secondary.

Sam Koch has been a punting machine this year. He punted 5 times today, putting 4 of them were inside the Browns 20, and three inside the five.

The Ravens gunners were Koch’s sidekicks today. They downed punts at the Cleveland 3, 4 and 4-yard line today. 2 of those were downed by Chris Moore. He has built a very strong reputation as an ace special teamer.

As usual, Justin Tucker was money and is cementing his legacy as the best kicker on the planet.

I feel like every week I harp on the coaches a little bit more. Well, here I am again with another rant. This week’s subject is John Harbaugh. Now, you can call this tick-tacky criticism as it didn’t end up costing the Ravens the game, but his in-game decisions continue to be a major concern.

If you remember last year during the 4-game losing streak from weeks 4 to 7, coaching decisions cost the team in several situations.

Well today, we start with going for it on 4th down. The Ravens ended up not scoring and then Cleveland walked down and scored. The team answered nicely, so at the end of the day it’s a wash, but it was probably the worst outcome you could ask for. With an offense like the Ravens that doesn’t score reliably, you need to take the points.

Secondly, the challenges continue to be puzzling. Duke Johnson made a 15-yard completion on 3rd and 5 and Harbaugh challenged that the ball was caught. To make matters worse, Willie Henry was assessed a 15-yard roughing the passer penalty. So even if you win the challenge Cleveland still gets the first down. However, Harbaugh needs to learn what the term “inconclusive” means and how hard it is to overturn calls.

Again, ticky-tack because it didn’t impact winning the game, but these are the decisions that can cost in big, close games.

Dean Pees didn’t get toasted today, but his defensive scheme continues to be very soft, especially with regards to dropping his inside linebackers instantly.

Despite being 8-6, the coaching staff leaves a lot to be desired with the talent on this team.

Today’s game ball goes to Joe Flacco. He remained calm and cool, despite going down and losing all momentum in the 2nd quarter, on the road, in an obvious trap game. What did he do? He rallied the team for two touchdowns to close out the half. January Joe, I can’t wait to see you!