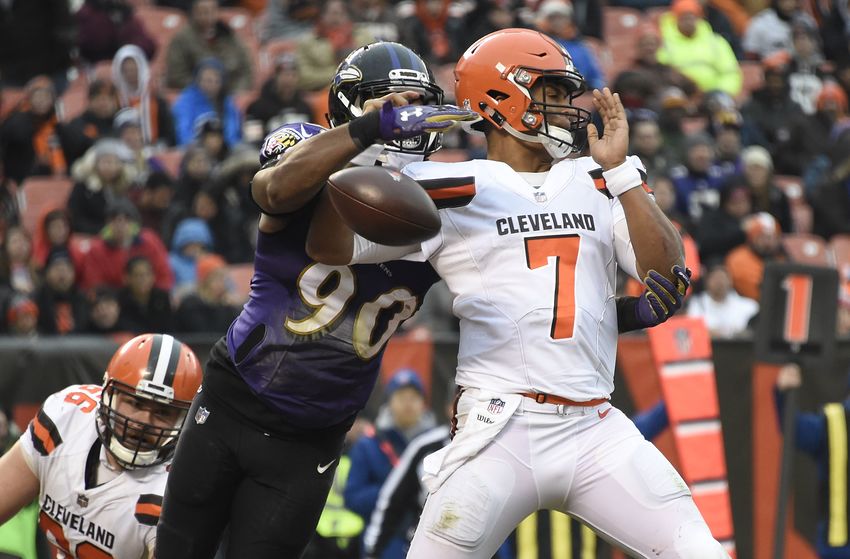 It wasn’t particularly impressive. It wasn’t very pretty and it was hardly the Sunday walk in the park that some predicted. But in the end, the Ravens left Cleveland with their playoff hopes firmly intact.

Around the AFC, the red-hot Chargers cooled and now their playoff hopes appear to be in serious jeopardy. The Bills held serve at home against the Dolphins but now they must travel to Foxborough to face the Patriots who have everything to play for – the conference’s No. 1 seed and home field advantage throughout.

The Titans lost to the now (4-10) 49ers and with a couple of tough games ahead to close out the regular season, what looked to be a sure bet for a playoff berth is anything but for the team from Music City. The Titans will need to beat either the (10-4) Rams or the (10-4) Jaguars.

Here’s how I see the AFC Playoff Picture shaking out.

Joe Flacco had an effective outing, connecting on 26 of 42 attempts for 288 yards and a score (90.2 passer rating). He also ran for another TD on a QB draw. Per usual, Joe had a couple of drops that cost him two first downs. He also missed on a couple of opportunities when failing to throw on time. He took a sack that pushed the Ravens out of field goal range. It’s those mental lapses that add to Joe’s inconsistencies. The TD pass to Ben Watson was a thing of beauty. Joe kept his head downfield and led his tight end perfectly. Watson never had to break stride. It was good to see Watson back in the mix on offense. He averaged 18.5 YPC. That vertical presence from the tight end position has been sorely missed. 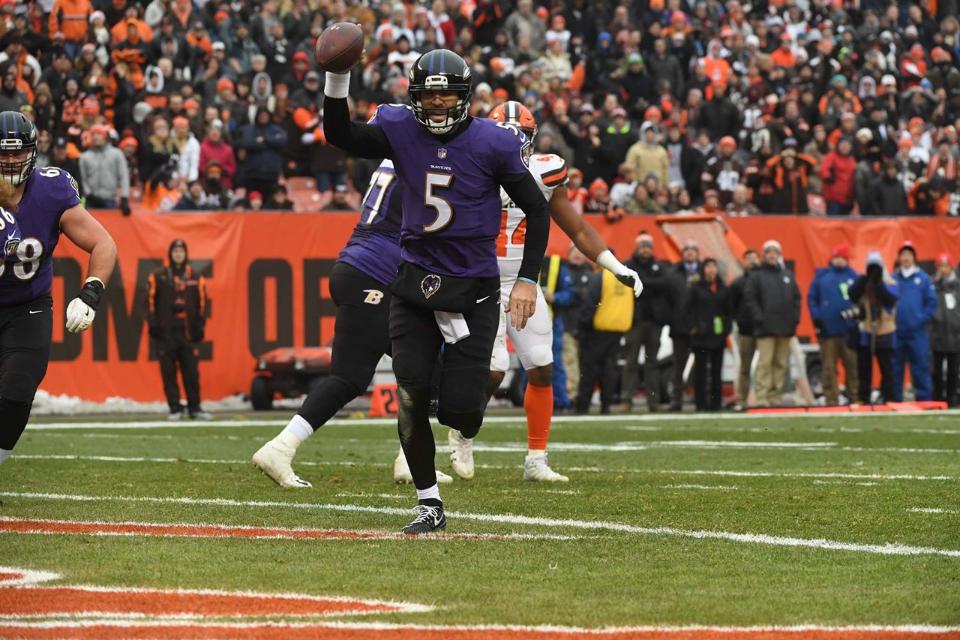 Buck Allen was effective in relief of the nicked-up Alex Collins. Allen posted 70 yards on 13 carries (5.4 YPC) on some nifty running inside the tackles…Mike Wallace chipped in with 89 receiving yards on 6 catches. Sixty of those yards came before the break courtesy of 4 first half grabs.

Matt Judon was all over the field for Dean Pees’ unit. He provided consistent pressure on DeShone Kizer registering 1 sack and 3 QB hurries. He also was effective in coverage, twice dropping pass receivers for losses…Za’Darius Smith brought heat off the edge with a strip sack in the Browns end zone that resulted in a huge touchdown on the fumble recovery by Brandon Williams, staking the Ravens to a seemingly insurmountable 24-10 lead…CJ Mosley bounced back from really bad performance in Pittsburgh. He had 6 tackles, 3 of which were for stops to help get the Ravens off the field. He contributed to the forced fumble by Duke Johnson and he was infinitely better in coverage, with 3 passes defensed including a batted pass that was nearly intercepted by Terrell Suggs…Patrick Onwuasor did a much better job of shedding blocks and making plays closer to the line of scrimmage…Dean Pees, having learned from the Antonio Brown fiasco in Pittsburgh, deployed some recourses to contain Josh Gordon who had just 5 catches on 11 targets for 47 yards (9.4 YPC). The Ravens defense also shut out promising tight end David Njoku.

The Ravens controlled the clock 36:48 to 23:12, running 16 more plays than the Browns. The Ravens were +4 in turnovers during the afternoon…Chris Moore continues to impress as a punt team gunner. 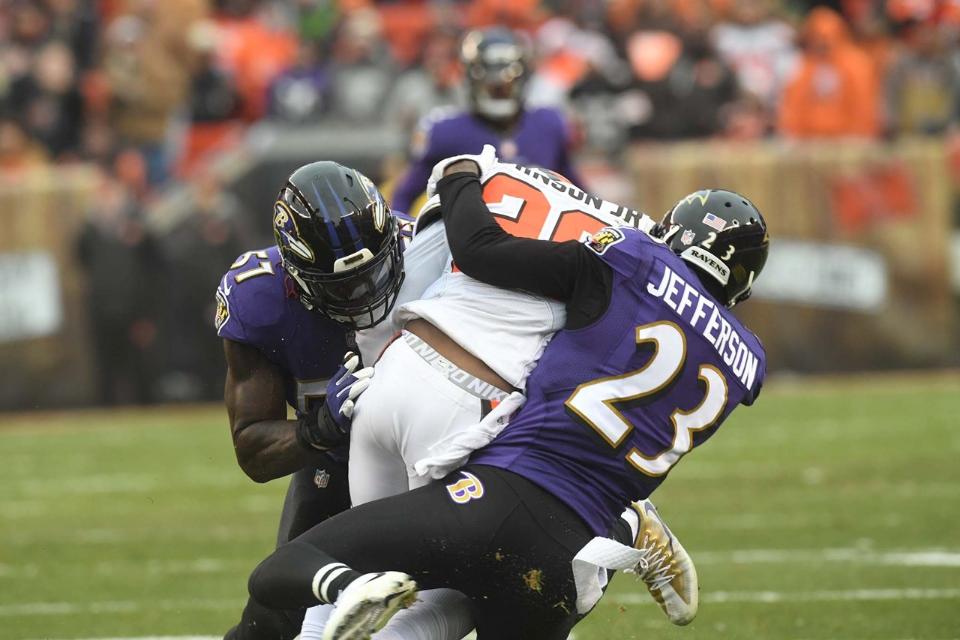 Marty Mornhinweg’s red zone play calling was about as unimaginable as the Browns’ helmets. The Ravens ran 17 red zone plays producing just 34 yards and 10 points. And this was against a red zone defense ranked 30th in the league. The run design inside the 5-yard line was ridiculously predictable and the read option play from Flacco hardly suits the signal caller’s skill set and if I recall correctly, didn’t Marty recently say that Joe’s improved play of late is at least in part due to his improved health. That play hardly helps to maintain Joe’s health and initially it looked eerily similar to the play that ended Carson Wentz’ season…The kick coverage teams were a bit late to the party, yielding nearly 26 yards per return to Jabrill Peppers…The Ravens had 7 penalties for 57 yards…John Harbaugh’s challenge in the fourth quarter of a catch by Duke Johnson was pretty ridiculous. Because of Willie Henry’s stupid roughing the passer penalty, the drive would have remained alive anyway. Replays clearly showed there was no visual evidence to overturn the ruling on the field. This can’t happen against better teams during tighter games. Unfortunately it will. Wasted timeouts are a Ravens thing.

Despite starting a drive from their own 4-yard line, the Browns drove the ball 96 yards on 5 consecutive running plays, capped by a Duke Johnson scamper from 12 yards out. It gave the Browns the lead and provided hope – the last thing you want to extend to a desperate (0-13) team…The stadium was at best half full. That’s a bad look for Cleveland and the rest of the NFL.

On average the Ravens started drives from their own 36. The Browns average start was their own 19. Field position and the number of possessions heavily influenced the outcome of the game and the biggest contributor to this wide variance was Sam Koch. Koch’s net average wasn’t overly impressive (40.8) but 4 of his 5 punts landed inside the 20, three of which were downed at the 3, 4 and 4 yard lines respectively. The nod for the MFA goes to Koch who barely edged out Matt Judon. 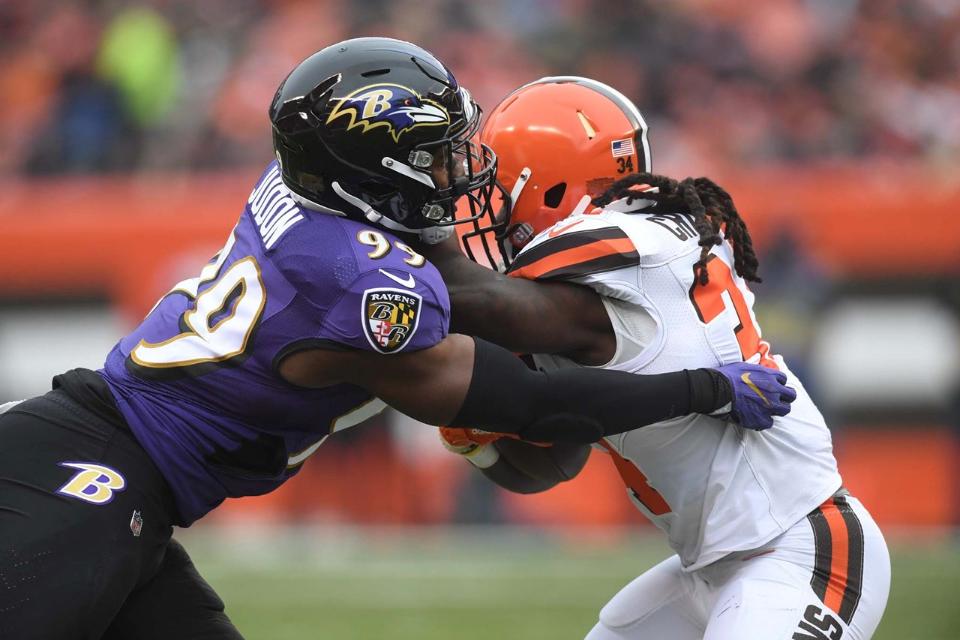