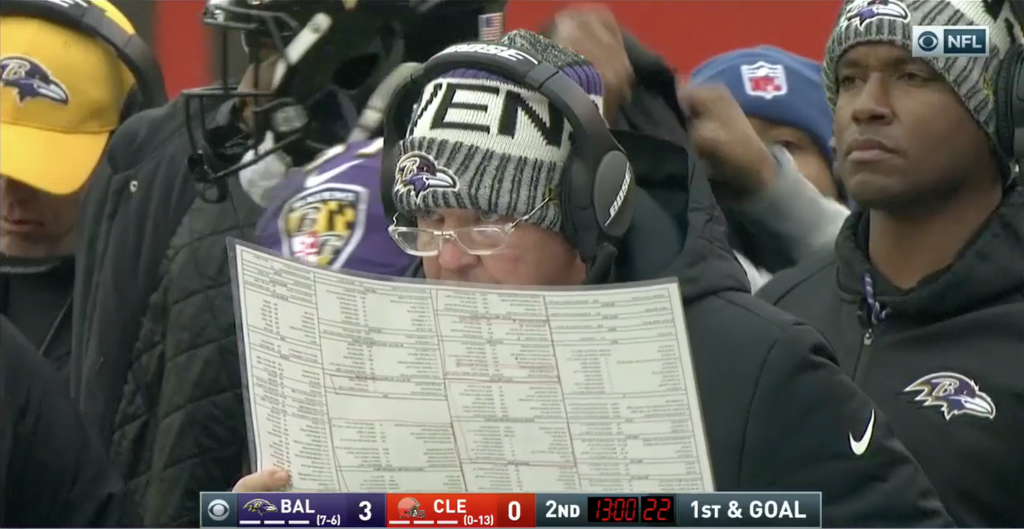 The offense remained in attack mode in early-down situations. Hard run-action (with movement from the line and the backs to really sell the run) set up opportunities over the middle, as the Browns’ backers continued to over-pursue to play the run.

Offensive coordinator Marty Mornhinweg continued to mix in first-down screen plays. In fact, that must be the most screens we’ve seen for the Ravens in…probably ever. These weren’t static screens either. Like everything else we’ve been seeing with the offense over the last three weeks, there was additional bite to these screens thanks to play-fakes and delayed motion. The screens weren’t home-run hitters by any means, but they helped to slow down the pass rush, and the initial fakes moved the Cleveland defenders out of position.

Speaking of Mornhinweg, there’s no doubt he made some head-scratching calls in the red area. Why, on first down, are you using Ronnie Stanley as a tackle eligible receiver? That’s a waste of a first-down play unless Stanley is at the one or two-yard line. Then again, that would have been a better play-call than the outside run he dialed up on fourth-and-goal to Alex Collins.

However, the whimsical OC deserves credit for putting the game on Joe Flacco’s shoulders when the run game wasn’t going anywhere. Towards the end of the first half, the offense went to more empty and pure spread looks from the gun to attack Cleveland through the air.

That adjustment in personnel and play-calling patterns flipped the outcome for the offense. Considering the Browns played softer coverage (the corners played 8-to-10 yards off the line at times), the spread offense really opened up the quick passing game for Flacco and he was able to get in a rhythm. 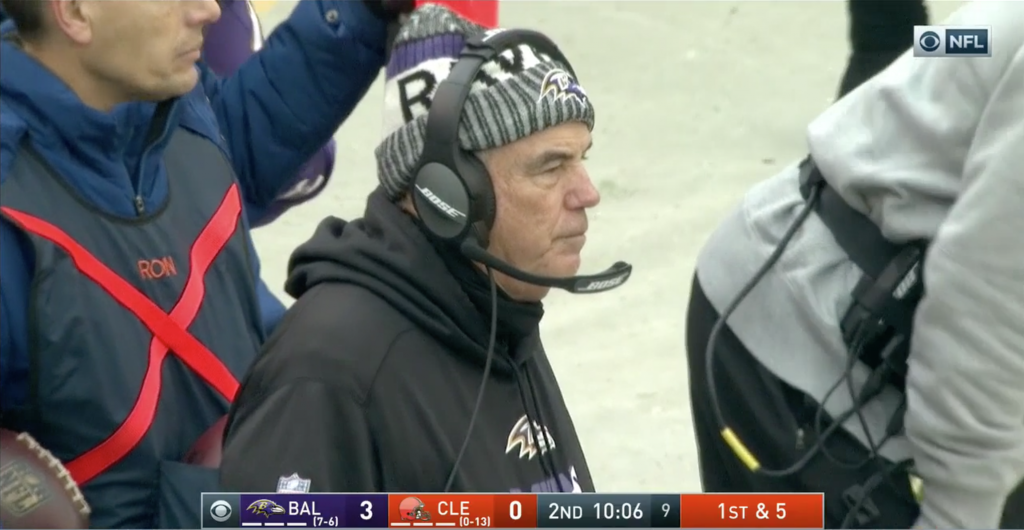 For as much as Dean Pees was lambasted in this section a week ago, it’s only fair that he’s showered with praise for the game plan he put together against Cleveland, right? Well, going up against DeShone Kizer and Hue Jackson’s curious play-calling certainly helps (why didn’t Hue run the ball more?). Ultimately though, Pees made the necessary coverage and scheme adjustments following the Pittsburgh game and it was on display.

He was determined to take receiver Josh Gordon out of the game through a combination of different coverages, consistent double teams, off coverage, and he even flipped Marlon Humphrey with Brandon Carr when the Browns showed a bunch look to the strong side.

Through motion and movement, Gordon faced the Ravens’ top three corners (including Maurice Canady on a hitch route from the slot). The Browns did a nice job of moving the prolific wideout all over the field and they targeted him heavily, but the corners and safeties played their two-man coverages perfectly. Even though Carr saw Gordon the most, Pees’ decision to play Carr off of Gordon at times in third-and-long situations was a superb tactical adjustment to give the veteran CB enough space to stay stride-for-stride with safety help over the top.

Another adjustment that Pees made that hopefully sticks the rest of the season is the use of more stunt action. Specifically, C.J. Mosley was heavily involved as a stunter, and provided a jolt to the interior rush. All in all, the pass rush was effective all game, and Pees kept it contained without exposing the back end.