A little over six years ago, on December 11, 2011, the Ravens finally put nearly a decade’s worth of frustrations against the Indianapolis Colts to bed with a 24-10 win. That ended a streak of eight straight Indy wins over Baltimore. It rang a bit hollow though, as Peyton Manning wasn’t on the field that day, and the Colts were in the middle of their “Suck for Luck” season, entering the game 0-12. The Ravens finally got their man(ning) a little over a year later, of course, taking Peyton down in Denver in the divisional round of the 2012 playoffs.

Baltimore has faced Andrew Luck just twice, besting him in those same playoffs, then losing to him in Indy in 2014.

Luck, like Manning in 2011, has been on the shelf all season. It isn’t Dan Orlovsky filling in this time around, but Jacoby Brissett. While a bit more competent than Orlovsky, Brissett is no Luck. Throw in the other 16 guys Indianapolis has on Injured Reserve, and one would think/hope Baltimore could take care of business this afternoon and make it a very merry Christmas in Charm City.

Let’s take a look at the stats, quotes, notes, and plenty more to get ready for Ravens-Colts, c/o Casa Mia’s White Marsh. 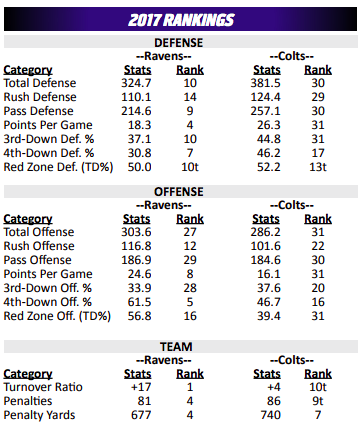 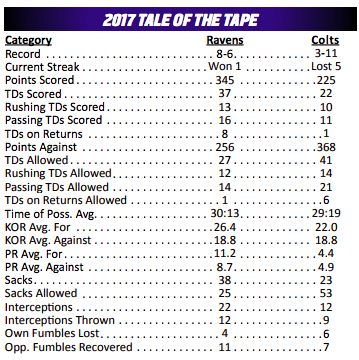 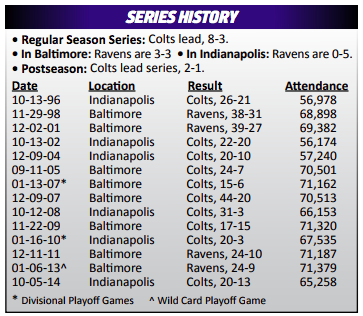 OLB Terrell Suggs on the Ravens’ mindset heading into the final two games:

DT Brandon Williams on battling to reach the playoffs:

“It’s on our mind, and it’s definitely our goal. But at the same time, it’s week-to-week, it’s day-to-day, it’s practiceto-practice. We have to get there first. We can’t start talking about it and then just forget about everything else. We have two games to go, and we have to give it everything we’ve got. We’re ready for these games, and it’s a two-game season.”

The Baltimore Sun’s Childs Walker on QB Joe Flacco, who has 5 TDs, 1 INT and 275.3 passing YPG in the last three games:

“Don’t look now, but quarterback Joe Flacco has played much better since the bye week. We spent so much of the early part of the season lamenting Flacco’s decline that perhaps we haven’t recognized his low-key renaissance since the bye week. Not that he’s making anyone forget the [2012] playoffs, but he’s cut way back on the crippling mistakes while increasing his yardage totals to respectable levels.”

RB Alex Collins on his mindset when Seattle released him following training camp this season:

“I’m just a really passionate person, and I put my all into it. I like to consider myself a hardnosed worker, not complain about much. I just put my head down, and I work hard. Whatever it is I’m told to do, I try to do that and more. I didn’t change anything up, actually, when I got here. I stuck with the same routine that I’ve had since high school, since college, to get my mindset right. That’s just a right place, right time, kind of thing. It was about coming here, just sticking with it, sticking with what I believe in, just working hard and facing adversity. You have to persevere through some things. A lot of people’s roads to getting to where they want to be in their careers aren’t easy. Everybody has to face a little bit of adversity – especially when you’re passionate about something or you want to be great at something. You go back to what you know and what you believe in to get yourself through it. That’s what I did.” 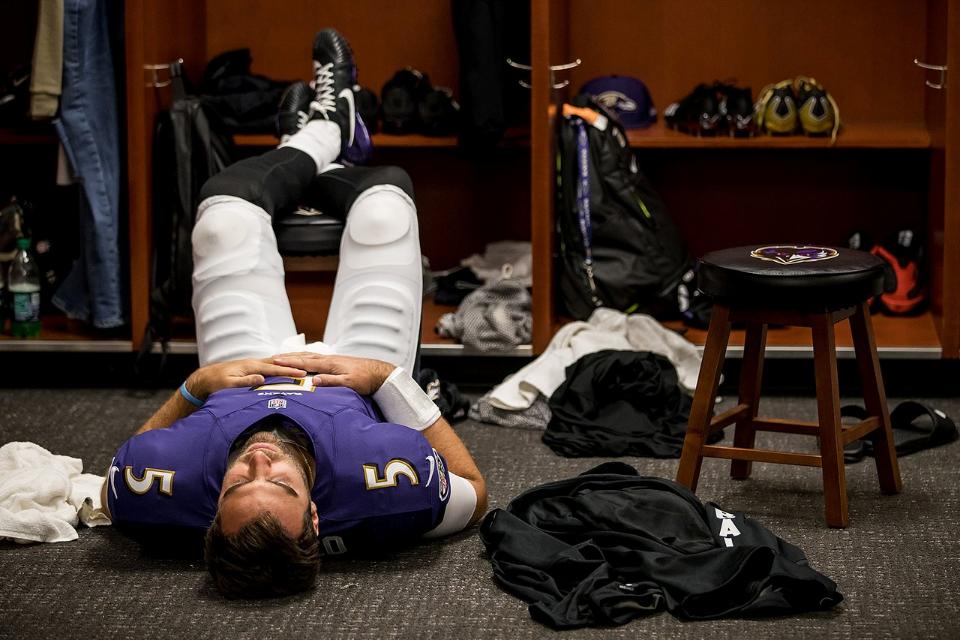 GETTING TO KNOW YOU ~ Q&A with Joe Flacco

What’s the best advice you’ve been given?

“To be confident in who you are and believe that you’re the best. It goes a long way – not only in sports. Especially with what we do, competing against the best every day, if you don’t believe that, then you’re not going to give yourself a fighting chance.”

What do you enjoy most about your hometown?

“I’m very biased towards it, but it’s a very old, tight-knit community. My town is a square-mile. I walked to high school until halfway through my junior year, then my buddy got a car. When I grew up, we would just ride our bikes to each other’s houses, knock on the door, and went out and played until our parents called us back in. I just loved how small and how easy it was to be a kid.”

If you had to create a Mount Rushmore of quarterbacks, who would you enshrine?

Have you ever been mistaken for someone else?

“When the Olympics were on, guys in the building would joke around saying that I looked like Michael Phelps. When me and [former Ravens tight end] Dennis [Pitta] go out together, people think we’re brothers.”

Who is the best player you’ve ever competed against?

“I didn’t necessarily compete against him, because he was on offense, but the fact that I got to grow up watching him – and eventually got to play against him – was Brett Favre. I was able to play against him when he was with the Minnesota Vikings. We played a really good game against each other, but it would definitely be him.”

What is one thing you’re bad at but wish you were good at?

“Singing or dancing. I know I can’t sing – I don’t really know if I can dance, but I definitely will never try. I wouldn’t take singing lessons from [Justin] Tucker, because he would make fun of me the whole time.”

What hobbies do you enjoy?

“Really, just other sports. It’s what I grew up doing, and a lot of my life revolves around that. At this point, it’s really just golf, and being a husband and a father. That takes up most of my time these days. For golf, me and some teammates get to play together when we’re here for a couple months in the offseason.”

What do you enjoy about your involvement with Special Olympics?

“I’ve been doing it since I was a rookie. It’s great to be around the athletes; they have a great outlook. It’s very rewarding. The great thing about the athletes is they wear their emotions on their sleeve and are very honest. You get a genuine reaction from them, and I like that.”

The Colts franchise originated in Baltimore in 1946. After going defunct for two years (1951-52), the Dallas Texans relocated to Maryland and became the new Baltimore Colts. The franchise remained in Baltimore until 1984, when it moved to Indianapolis.

Colts head coach Chuck Pagano spent four seasons (2008-11) in Baltimore before joining Indy in 2012. Pagano was the Ravens’ secondary coach from 2008-10 and defensive coordinator in 2011.

Colts LB John Simon (IR) was selected by the Ravens in the fourth round of the 2013 NFL Draft, playing in seven games for Baltimore during the 2013 season.

Colts CB Rashaan Melvin played in the Ravens’ secondary for parts of 2014 and 2015.

Colts C Anthony Fabiano signed with the Ravens as a RFA in 2016, when he spent training camp in Baltimore.

Not quite a Sam Koch-esque fake punt here: