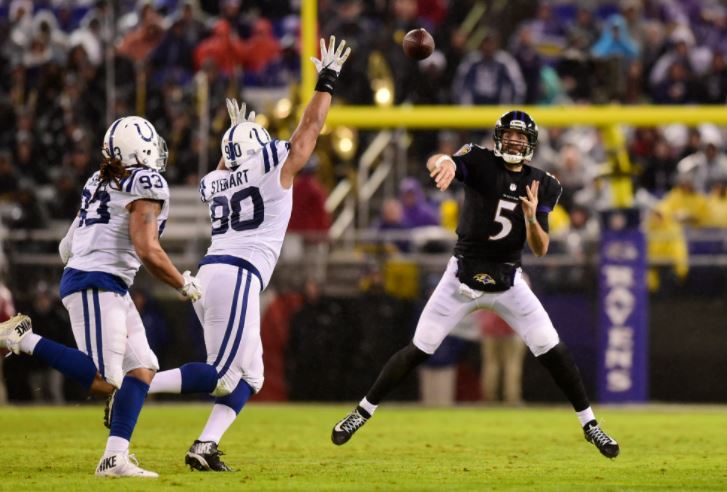 Well everyone, you can breathe a sigh of relief. Things were getting scary there in a crucial game, but at the end of the day the Ravens held on.

Fans were treated to an early, albeit stressful, Christmas present. Let’s break the position groups down.

The Ravens offense is proving that it will go as far as Joe Flacco will take it. It was a bit of an underwhelming game. The Ravens only gained 323 yards against a lesser opponent with a weak defense that was missing some key players.

However, at the end of the day they did enough to put the Ravens in a position to win the game and you can’t ask for much more than that.

The Flacco Report: A

And what does that mean for fans of the purple and black? It means Joe is going to elevate his game. Boy, has he not disappointed. So far, in four December games Flacco has thrown:

To compare, the rest of the season he is:

He made some very impressive throws on the run against Indy when he was flushed from the pocket. He missed a wide open Nick Boyle for a sure touchdown, but came right back and threaded a needle to Michael Campanaro in the end zone instead. All’s well that ends well.

What a turnaround in the last 4 games and it’s coming at just the right time for the team. It’s almost like clockwork. One of the reasons I am still sold on Joe as a franchise QB is because he can still win big games and he’s proving it. January Joe….see you soon.

One concerning stat from Saturday’s showdown was the Ravens running backs only gaining 96 yards on 27 carries (3.5 YPC). Alex Collins had a down game with only a 2.8 YPC on 18 attempts.

Given the Colts lost Jon Bostic last week and have a less than spectacular front 7, Collins was expected to really run wild. However, it was Javarius “Buck” Allen that got the better of the Colts.

Buck seemed to run better behind the line this week as they utilized the zone stretch a little more. Collins typically does his damage in the man power blocking.

Buck is having a very solid season in a complementary role and the offense is going to have to ride the hot hand next week against a feisty Bengals defense.

Mike Wallace continues to show his chemistry with Flacco and provide down-field presence. Wallace brought in 4 of his 6 targets for 60 yards. Benjamin Watson added 5 catches for 40 yards.

Flacco’s 2 touchdown receptions were brought in by Michael Campanaro and Maxx Williams. These are two names that Ravens fans should be delighted to see in the end zone. Both have some serious potential, but haven’t lived up to it. 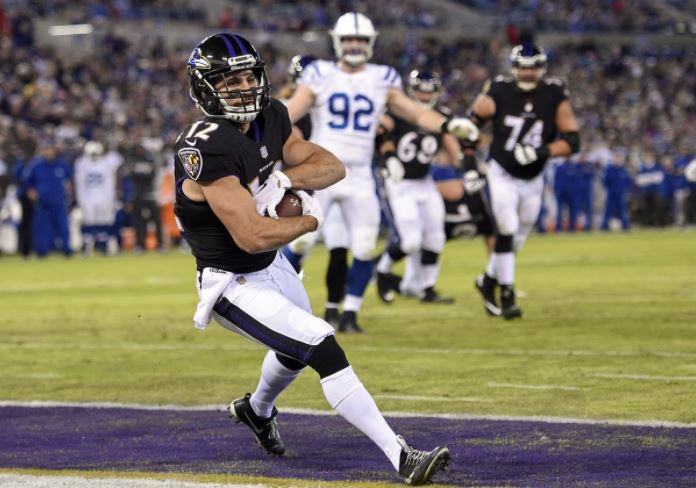 The fact remains very clear that this team needs a #1 receiver. Every year when Joe starts to play well down the stretch you can see he’s just missing that go-to receiver. That was the kind of guy Anquan Boldin was in 2012 and finding a guy like that needs to be a priority for the Ravens this offseason. *Cough Jarvis Landry cough*

As usual, this grade needs to be broken down into two.

Pass blocking, the unit was phenomenal once again. Not only was Flacco only sacked once, he was only hit twice throughout the game. There’s a very strong correlation between Joe’s recent success and very strong pass blocking.

However, the run blocking wasn’t there today. A dominating performance was expected and maybe the hopes were too high, but nonetheless it dragged the grade down.

One pleasant surprise this season has been Matt Skura. I started a thread on the RSR Forum about what he is going to be moving forward and I think the answer is a guy that can provide depth and compete with Alex Lewis for the starting LG spot (if the Ravens don’t draft additional competition). I think the Ravens found a gem in Skura and he’s playing very well at the RG position in Marshal Yanda’s absence.

Bend, but don’t break was the name of the game today. The Ravens allowed a touchdown pass to Colts RB Frank Gore, but other than that they held the Colts to 3 field goals and 16 points.

Given that the Colts have one of the worst offenses in the league, it was a pretty disappointing performance.

The part of the Ravens game I’m most concerned about is surprisingly not on offense. It’s the pass rush. Jacoby Brissett had all day on most of his throws and I’m 99.9% sure I saw him file his taxes while he was back there before throwing the ball.

It isn’t so much sack numbers that are concerning. It’s the lack of consistently getting pressure on the ball. RSR’s film master, Ken McKusick takes a detailed look each game and I highly suggest you take a look at the pass rush numbers, particularly how many blitzes are sent per game.

Yesterday looked much like the Cleveland games in the sense that they may have game planned to take into consideration the speed of Brissett and focused more on contain than on pressure (similar to how they’ve done with DeShone Kizer). However, it’s still unacceptable to have so many bland 3- and 4-man rushes. The Ravens need to generate a pass rush in order to have success in the postseason.

The combination of Michael Pierce and Brandon Williams had an underwhelming game in stopping the run. The Colts didn’t run all over the Ravens by any means, but they were able to run the ball when they needed to and it hurt the Ravens.

C.J Mosley has been taking some heat in my grades recently, but he has strung together two strong games after being owned by Jesse James and the Steelers offense.

Mosley had 2 tackles for a loss and a pass deflection and seemed to be around the ball a lot.

Matt Judon had a quieter game than normal, but didn’t stick out for the wrong reasons.

As a whole, this group got caught in the wash on running plays too often.

The linebacker group continues to be under the microscope. An athletic pass coverage linebacker may be on the wish list during the offseason to pair with Mosley moving forward.

Another #1 receiver. Another difficult time slowing him down. T.Y. Hilton finished with 6 catches for 100 yards and made some crucial chain-moving plays. However, at the end of the day it was the defensive back group, namely Maurice Canady, that ended the game.

It didn’t show it in the post-game video, but I have to imagine Eric Weddle was working with the jugs machine. Weddle dropped two interceptions, one of which would have ended the game a little earlier. Weddle has been strong with his positioning this year and that showed Saturday; however, he just wasn’t able to secure the ball like he has for most of this season.

Marlon Humphrey’s rookieness (new word?) has been showing. However, that’s not a slight. He’s a rookie going through some rookie learning experiences and at the end of the day you have to be exciting about the kid moving forward. Between the return of Jimmy Smith and Tavon Young and the stellar play of Humphrey and Canady, you have to be excited about the 2018 cornerback group.

Oh man, how do we grade this!?

The Ravens defense made a huge play on the Colts second drive. The Colts drove 55 yards over 11 plays and attempted a 38-yard field goal. However, Tony Jefferson was having none of that and got the block.

Then with 2:45 left in the game, Sam Koch’s punt got blocked by the Colts and gave them some stellar field position before the Ravens forced a turnover on defense.

I guess they cancel each other out?

Justin Tucker was perfect on the day, as per usual.

One thing you have to wonder as a Ravens fan is, has John Harbaugh lost confidence in Dean Pees? I, for one, was shocked the team used two timeouts during the Colts last drive. You have to think Harbaugh was preparing for a Colts touchdown and tried to manage the clock so Flacco and company would have some time to get in field goal range.

Harbaugh may have been playing the momentum game, as the Colts just got the blocked punt with great field position, but it really shocked me to see that.

Dean Pees was his normal boring self and didn’t do too much schematically to help the team. Typical.

Marty Mornhinweg called a strong game overall including some solid sequences to run the clock down. That being said, it seems like he has a few random plays that have no business being called and it ruins everything good he is doing. These plays seems to show up at the worst time – in the red zone. Case in point: a TE screen to Nick Boyle with Watson and 2 offensive linemen split out to block.

Game ball goes to Joe Flacco again. Maybe this is too much Flacco love, but credit goes where it’s due. He’s rebounded from a poor start and was the best Raven on the field last night.

As a Ravens fan, history tells you there’s not much more you could want with January approaching.