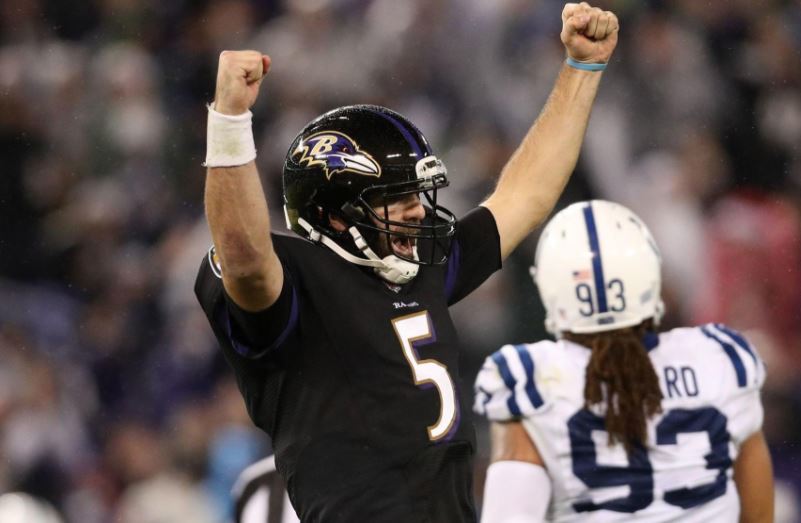 Given the conditions, this wasn’t the easiest offensive performance to assess. By and large, the offense was very effective from a scheme and execution standpoint.

The Ravens continued their trend of starting games with two-tight power sets, which morphed quickly to spread looks and a steady mix of empty with Danny Woodhead as the “fifth” receiver. The Colts adjusted by dropping eight into coverage and rushing three at times, which is something the offense may see from other defenses going forward.

Against those eight-man coverages, Joe Flacco was able to find receivers in front of the Indianapolis backers on sit down routes. Those sit-down routes really worked well all night long to pierce Indy’s soft zone on first down and set up shorter second-down conversion situations. The problem was, the offense didn’t take advantage of those scenarios.

In a lot of ways, it was a plus that Jeremy Maclin was out and Michael Campanaro got the starting nod against the Colts. Campanaro was a much better fit to attack underneath and he sparked the controlled passing game the offense needed in a driving rainstorm. Despite not having the chance to work from rubs or stacks, Camp was able to get separation on his own – offensive coordinator Marty Mornhinweg needs to use formation manipulation to get Campanaro free releases going forward.

Lastly, you have to like the developing screen game we’re seeing from the offense. On the middle screen to Ben Watson in the first half of the game, Campanaro ran a jet sweep fake, only to pivot away from the strong side and fake a pass attempt in the flat to the weak side. That misdirection went along with a fake handoff followed by a flare route pump fake to Alex Collins to the strong side. Combining all of this misdirection opened up the middle screen for Watson.

It’s the type of misdirection set up we’ve seen from other teams around the league (the Chiefs and Rams do it as well as anyone). A lot of eye candy to influence defenders out of position. If the Ravens can harness more plays like this, they’ll gain chunk yards in space. 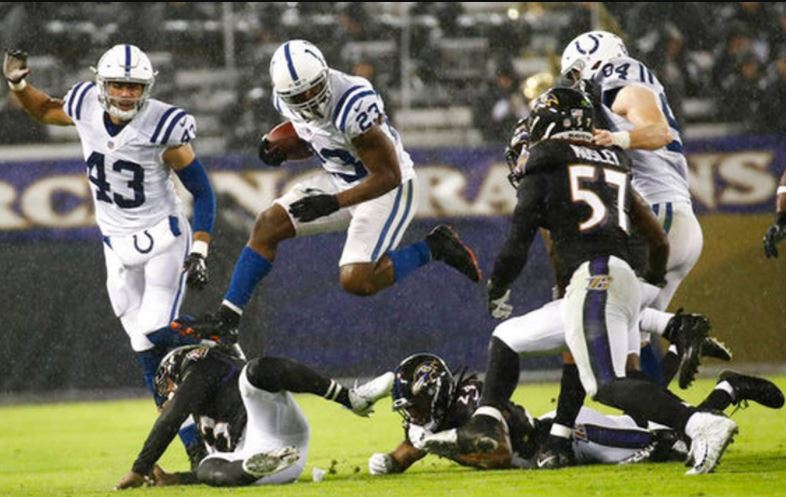 Defensive coordinator Dean Pees was determined not to give up the big play to T.Y. Hilton, and the conditions certainly played a part in keeping the big-play receiver mostly contained. Still, from a coverage technique standpoint, it was a hit and miss night against Hilton. There were instances in which Hilton faced bracket coverage along the sidelines, but he was able to beat that coverage. The Colts did a nice job of moving him around as well, playing him in the slot to face Maurice Canady, and also using him on motion/stack releases to break free.

Ultimately, the corners played right on top of Hilton at the line, but they didn’t jam him to impede his release. He was able to get the free release too often, which was a big factor in his ability to get open so frequently. However, despite the damage Hilton inflicted, you’d rather deal with all those intermediate paper cuts instead of the big gashes downfield.

Marlon Humphrey matched up against Hilton several times. It appears that Humphrey will move away from his side of the field when the offense goes to a 3×1 look, and those were the instances in which he faced Hilton. Humphrey continues to show impressive quick-twitch movement and athleticism to stay stride-for-stride with receivers without using his hands. He’s a natural cover corner.

Getting to the defensive front, the pass rush was non-existent in the first half of the game and for much of the second half. Dean Pees had some mild success when he brought extra rushers. Specifically, on one 3rd and 7 play, he showed a slot corner blitz from the strong side but ultimately came with the slot corner blitz from the weak side, speeding up Jacoby Brissett’s clock. I expected more of these perimeter exchange and overload blitzes, especially when you consider that the Colts had to shuffle the right side of their offensive line.

The biggest problem of the night? The Colts were consistently able to stay in ideal second and third-down situations because they were productive on first down. By avoiding third-and-long, Indianapolis kept Pees’ rush schemes tucked away under the Christmas tree.