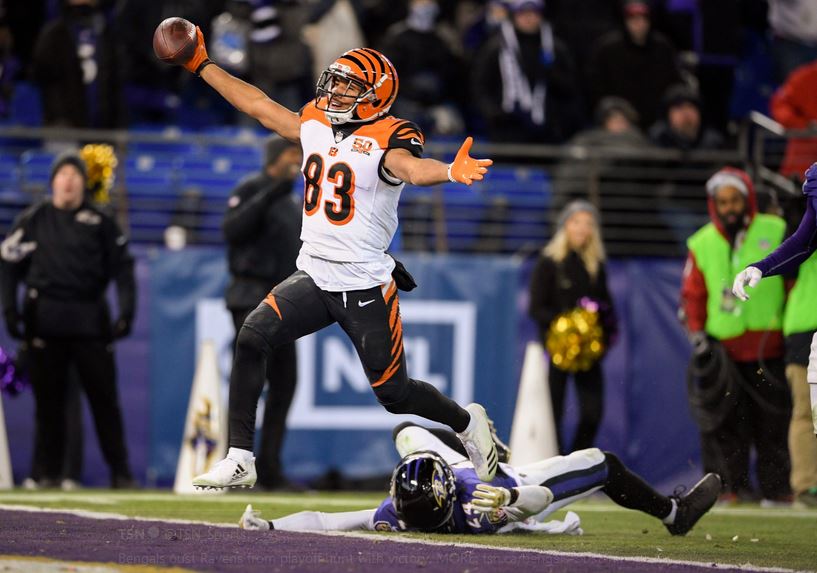 Well, looks like this will be the last report card of the season for the Ravens, after not showing up until the second half, then heading to the locker room 3 minutes before the game was actually over, all culminating in a 31-27 loss to the Bengals, and going from a 5th seed looking forward to playing in Kansas City next weekend, to booking 18 at their favorite golf courses instead.

Just like the biggest wins of the season were a full team effort, this game, their biggest loss, was a team failure. From coaching, to the offense and especially the defense, this team decided a collective 27 minutes was enough to win…

Let’s get it over with…

Average Joe with an average grade.

FOUR completions in the 1st half, and his one touchdown only came thanks to a Chris Moore return to the 5-yard line of the Bengals with 8 seconds left. The offense otherwise never saw the inside of the Bengals 30 until the second half. En route to the awful first half, Flacco under-threw Mike Wallace on three deep balls, all on 3rd down, and all three were nearly picked off. Actually, I counted 5 near interceptions for the Bengals on poor passes by Flacco.

Then there was the final 38 seconds of the game. Flacco had a chance to drive the Ravens down in that short time with 3 timeouts, but never bothered to throw the ball more than 5 yards down the field on any pass, including the 4th & 14 pass to Ben Watson for about 5 yards, and though Watson ran for another 7, he came up well short. Joe also took an ill-advised sack on that drive.

Honestly, it was the perfect summation of Flacco’s season on one drive: throws short of the sticks, takes a bad sack, and throws behind a receiver.

Mike Wallace had a few phenomenal catches (5 for 40, 1 TD), but should’ve had more on his 13(!) targets, thanks to a pair of bad drops. I will give him credit for his nearly phenomenal catch down the sideline while getting popped, despite not getting his heel down.

Chris Moore was a major factor… both good and bad. Moore caught a touchdown to bring the Ravens within 7 at the half, but it was his only catch of the day. Moore was also targeted on the Ravens opening drive of the 2nd half, only to bobble the ball for, like, 30 seconds, and watch it end up in Darqueze Dennard‘s hands, returned for a touchdown. That ball should have been caught. Period.

Otherwise, Camp caught 3 balls for 36 yards and.. yea. That was it. Can’t expect more from WR’s when you don’t have any…

Alex Collins (20 for 78 yards, 1 TD) had the play of the game for the Ravens, and possibly the best play by a Baltimore back since Rice‘s 4th & 29 conversion: On 4th & 3, Collins went to the left with a closed lane, flipped the field, and went 17 yards to the end zone for a touchdown. Flacco got in on the block to clear a lane as well, so good on him!

Buck Allen contributed 37 yards on 5 carries, while Danny Woodhead did most of his minimal damage in the pass game with 16 yards on 4 receptions.

Ben Watson became a Flacco’s Favorite in the 2nd half, ending with a team leading 7 receptions, & 61 yards receiving. Unfortunately, Joe didn’t utilize Watson in the first half… or anybody for that matter…

Nick Boyle also contributed a pair of catches for 24 yards. No hurdles.

So the offensive line only allowed a single sack, BUT Carlos Dunlap was on Joe all day long. On occassion Joe would have time to throw, and rarely was he flushed, but the pressure was surely coming…

They also struggled to open up a single running lane all day long, which surely hurt the Ravens attempt at a balanced offense (26 carries, 47 pass attempts).

Couldn’t stop a run up the gut in the first half… but could in the second half.

Couldn’t get pressure on Dalton most of the day with a 4-man rush… but managed to flush him from the pocket on a few occasions.

Brandon Williams had a pass defended by the way. Cool. I guess.

For every great play made by the ILB’s (C.J. Mosley blowing up Joe Mixon behind the LOS on a 3rd down, forcing a fumble by Mixon in the 2nd quarter) there were 2 blown plays (see every single Tyler Kroft catch, and Patrick Onwausor’s inability to cover anything, ever, anywhere on the field).

The OLB’s rarely got close to Andy Dalton, sans a 6-man rush, which is quite frankly embarrassing. Matt Judon did have the only sack of the day on Dalton, and played well in limited coverage. So… yay I guess…

Eric Weddle recovered a fumble and nearly had an interception, if not for Marlon Humphrey‘s holding penalty negating the pick.

Tony Jefferson had a handful of tackles, including a great play sneaking up to the line as the Dalton took the snap, handed it to Gio Bernard, who was instantly met by TJ. Hopefully our next DC will learn how to use him properly…

But the good stopped there.

Brandon Carr and Marlon Humphrey took ill-advised penalties on the Bengals’ game-winning drive, Maurice Canady watched Tyler Boyd walk right by him on his way to the winning score, and really had an awful game. Jimmy Smith was sorely missed in the last few weeks.

I guess shutting down A.J. Green for only 17 yards was good, but what does it matter if you let everyone else run roughshod over you all day?

The only good unit.

Sam Koch‘s foot is likely black and purple like his jersey, after nearly double as many 1st half punts (7) as Flacco completions (4). Justin Tucker went about his business, kicking everything through the uprights all evening.

Chris Moore (3 kick returns, 124 yards) and Michael Campanaro (3 kick returns, 73 yards/ 6 punt returns, 42 yards) had a solid return game. Camp drew a hit out of bounds, but also got hurt on the final return, which hurt the Ravens losing 1 of their 3 receivers worth a crap.

Double minus on the C.

Dean Pees couldn’t stop Cincy in the first half, or on the final drive, ending his Ravens career in typical fashion (before you start on the Super Bowl talk, he had a massive lead that he almost blew in that game, too).

Marty Morhinweg couldn’t get the offense moving at all in the first half, then when they needed a sustained drive up 3 points late in the 4th, Marty called an awful series that led to a quick punt and… well, you know the rest.

At least Harbaugh didn’t burn through timeouts that they didn’t even need in the end!

When the post-season is on the line, your entire  team should be giving 200%.

The Ravens instead, opted to give a measly 20% in the first half, 200% for the 3rd quarter and most of the 4th quarter, then back to 20% to end the game, and inevitably, the season.

They were outplayed, out-coached, and out-worked by the 7-9 Bengals, who were playing for absolutely nothing, while watching player after player go out with injuries all game long.

Needless to say, this game will leave an awful taste in the mouth of Ravens fans for a long time, and unless some major changes are on the horizon? There’s no reason to expect much different results ahead of us…