Another opportunity to advance.

Another ticket to the postseason dance.

Another chance to experience the exhilaration of playoff football.

All of it, gone, another victim of another fourth quarter meltdown by an extremely overrated defense.

Let’s be honest, when the national media all talked about the greatness of the Ravens defense when describing the team once projected as the 5th seed, we knew, deep down inside, that most of the accolades were rooted in reputation. We knew that the statistical achievements of the 2017 defense were nothing more than the byproduct of playing substandard offenses led by unaccomplished quarterbacks.

Seven of the Ravens 9 wins were against quarterbacks named Kizer, Hundley, Savage, Manuel, Moore and Brissett. Let that sink in.

We were intoxicated with the idea that maybe Joe Flacco could get on a postseason roll like he has in the past and that maybe the Ravens could be that playoff team that no one wanted to face. We know that playing at Heinz Field or Gillette Stadium hardly intimidates the Ravens.

We’ve seen it before. Punch that playoff ticket and anything is possible.

It was also possible that a defense, tortured by averaged to highly accomplished quarterbacks, could be shredded in the fourth quarter when it mattered most. Beginning as far back as the second half of Super Bowl 47, we’ve grown accustomed to seeing leads evaporate. And if we’re being honest, that Super Bowl lead could have easily been another game blown by the defense, particularly if SB 47 had an officiating crew with a penchant for calling ticky-tacky fouls like the one at The Bank on Sunday evening.

Since Flacco hoisted The Lombardi on February 3, 2013, the Ravens have won just once during the postseason and they’ve been on the outside looking in during four of the last five seasons. No longer are they among the league’s best franchises. No longer are they a team that fans can identify with. No longer do they generate excitement as evidenced by a half empty stadium during the season’s most important game.

And that has to put a dent in the franchise’s net worth.

Owner Steve Bisciotti has shown patience. He enables his staff to do what they do. But at this point such freedoms look like an overabundance of blind faith. Without change, how do those seats get filled again? How do they restore the faith of fans by bringing back the same crew and doing things the same way, expecting different results?

One thing will change – the role of defensive coordinator. But will the results change if John Harbaugh promotes linebackers coach Don “Wink” Martindale into the position? Can the new coordinator get a better return on the ample investment the Ravens have made on the defensive side of the ball or is he just a Pees disciple? Will Harbaugh’s steadfast loyalty inspire the red-carpet return treatment for oft-criticized Marty Mornhinweg? Can this team ever draft and develop a premier pass catcher?

The questions are many. The answers are few – at least for now. We can only hope that they are sufficiently addressed but until we see it, ON THE FIELD, we’re left with reminders that for the last 5 seasons, the Ravens are nothing more than a mediocre franchise. Their (40-40) record since Super Bowl 47 is substantive proof.

Now, let’s get to the Good, Bad & Ugly from the excruciatingly painful season finale.

Joe Flacco’s laser to Mike Wallace to give the Ravens a temporary 27-24 lead was a thing of beauty. It was also a reminder of a play that the Ravens seem to have scrapped – a simple out pattern. Remember the days when Joe and Derrick Mason regularly connected on those? Yeah, me too…Alex Collins didn’t have much real estate to navigate as he was the primary target of the Bengals defense. Yet he did manage a few key first downs and a very tough 78 yards on 20 carries, including a 17-yard score…Buck Allen’s vision seemingly improves with each game. He had 37 yards on 5 carries including a clutch 19-yard gain at the 5:05 mark of the fourth which should have set the Ravens up to win the football game…Ben Watson had 7 grabs for 61 yards…Michael Campanaro had 3 catches in the fourth quarter that all went for first downs deep in Cincinnati territory…Chris Moore’s 87-yard kick return near the end of the first half was a huge momentum shift in the game…Marlon Humphrey was very effective when isolated on AJ Green. He’s grown up quickly and he’ll be a star in the league. 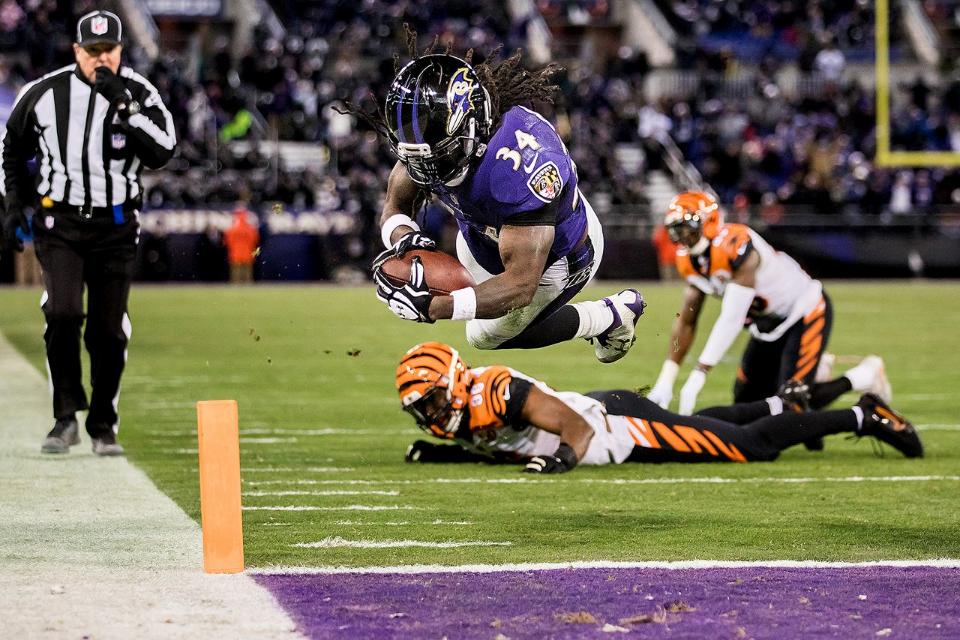 Joe Flacco certainly has a strong arm. But that doesn’t make him a great deep ball thrower. He missed on two long ball opportunities with Wallace who had gotten behind the secondary. Flacco didn’t get help from his receivers either. He had 5 drops (Wallace 2, Allen, Collins, Boyle) during the game that would have produced at least a few first downs and set up another field goal and touchdown. That said, Flacco is regularly off target, forcing receivers to stop their routes or reach back to make a play on an off-target pass, undermining the possibility for yards-after-catch. Most will want to blame Chris Moore for the pick-6 but that was simply a player trying to make a play on an off-target pass. You can never fault effort. Flacco also threw into traffic from the Bengals 6-yard line just prior to the go-ahead score. …The Ravens offensive pace was exceptionally slow. They had no rhythm and with Bengals’ players continually shuffling on and off the field with injuries, you have to wonder why Marty Mornhinweg didn’t at least try a no-huddle attack or try to attack the replacements. 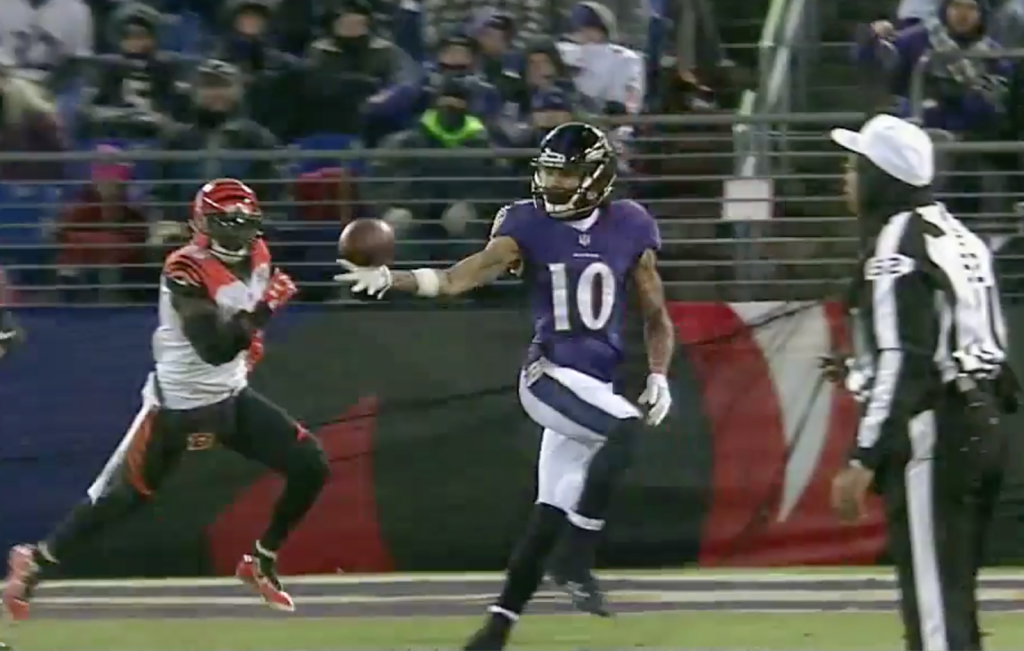 Maurice Canady has been on a positively productive track since returning from IR. On Sunday, that progress was derailed and he was regularly beaten by Tyler Boyd (5 catches, 91 yards), including of course, the game winning 49-yard score…Matt Judon and Za’Darius Smith failed to effectively hold the edge on run plays during the first half…CJ Mosley made a few nice plays in space but those were offset by his inability to sift through the wash and make stops in the first half. Patrick Onwuasor is not a starting linebacker in the NFL. He was MIA…Kamalei Correa plays very little and the assumption here is that his insertion in goal line situations is to help cover tight ends. He failed – miserably, when Tyler Kroft caught his first TD pass…The holding penalty against Vince Mayle allowed the Bengals to flip field position late in the fourth quarter. Following a 55-yard punt, Mayle was flagged and the Ravens were forced to start their drive from the 15-yard line.

The crowd. What has happened to the Ravens fans? The Ravens brass should really host a roundtable of fans and consider what they have to say about why they aren’t going to games anymore…The Ravens had only 2 first downs and 61 net yards of offense in the first half. They were out-possessed 20:55 to 9:05 and they were 0 for 8 on third down conversion attempts…They regularly ran routes short of the sticks. 4.3 yards per passing attempt is ridiculously bad…At the 2:51 mark of the game the Ravens looked to throw a screen pass but the play wasn’t there so Flacco threw it at the feet of his target to kill the play. The smarter play would have been to take the sack and keep the clock moving or force the Bengals to use their final timeout…The pick-6 could have been a back breaker but to the Ravens credit they bounced back. The back breaker would come later when once again, in a critical situation, needing a stop to end the game, despite the Bengals starting from their own 10, a Dean Pees defense allowed another opponent to march the length of the field, 11 plays, 90 yards in 1:59 to take the lead for good.

In the first half, the Ravens gave up 126 net yards rushing and on the day, they allowed the Bengals to run for 146 yards, 4.9 YPC…During the Bengals first drive of the game, the Bengals never even faced a third down situation – 8 plays, 78 yards, 4:05…Brandon Carr’s two P.I.’s were costly…Perhaps the most excruciating play, maybe even more so than the Boyd TD, occurred at the 1:23 mark of the fourth. Facing a 3rd-and-5 at their own 48, it appeared as if Dalton would be sacked by Za’Darius Smith. He escaped and threw downfield and the pass was intercepted by Eric Weddle. However, the officials called holding on Marlon Humphrey on what looked to be the kind incidental contact that occurs while competing. The interception would have ended the game and put the Ravens in the playoffs. Ironically, the man intercepting the pass, Weddle, would have collected a $1M bonus for making the Pro Bowl and the Ravens going to the playoffs in the same season. Now that’s painful!

He’s adored by his colleagues and players. His knowledge of the game is respected immensely by his peers. When the heartfelt accolades pour in from all of those who have known him as a coach and/or mentor, you know that there’s an uncommonly positive substance to the man. And that man is Dean Pees.

His departure, however emotional for the team, is really a welcomed change and change is something that is needed throughout an organization that for half a decade has been stuck in neutral.

We wish you the best during your golden years Coach Pees. 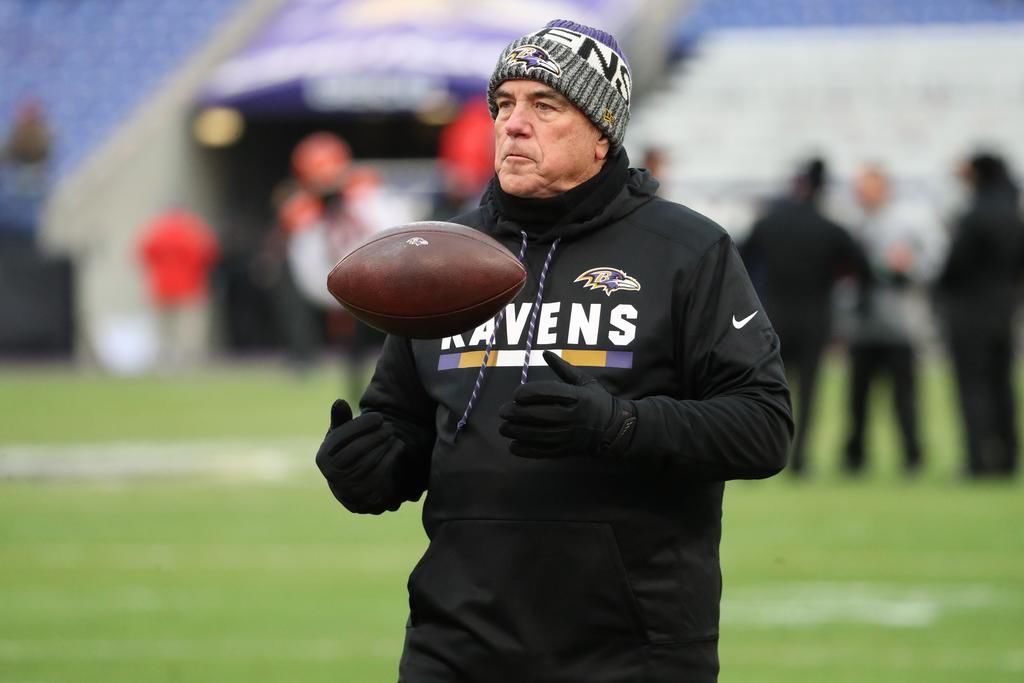