For you know what and giggles I just went on to Stub Hub to check on Super Bowl 52 ticket prices. The very first screen shot that came up showed tickets in the upper corner of the end zone for $4800 each.

And it took me back about 17 years ago…

Just prior to the start of the 2000 season I decided that Super Bowl XXXV would be my first NFL Championship game. I was then a frequent flyer on USAir and I had accumulated enough points to secure two first class tickets to Tampa, FL.

I booked the flight in September, not knowing which teams would make it to the big game.

As the season continued it became apparent that the Ravens had a realistic shot to make the playoffs. And when they did, we remember the magic that happened.

I arrived in Tampa in January 25, 2001 without a game ticket. The buddy I traveled with had been to a couple of Super Bowls and he understood the landscape. “We’ll figure it out, and we’ll get in”, he said.

“No need to rush to buy tickets.”

We arrived on Thursday and by Saturday we had scored a pair of tickets for $1500 each. We were told they were club level somewhere between the 20’s. But when the ticket broker arrived, the tickets were not as described but instead, they were in the upper corner of the end zone. Nearly identical to the tickets that today are going for $4800 each.

Given that the game was less than 24 hours away, I felt pressure, and bought the tickets anyway.

I called my buddy to let him know of the bait and switch tactic.

While on my cell bellyaching about the tickets, another broker offered me $2000 each for the tickets and before I could do THAT deal another offered $2500 each.

I took the cash.

Now we just made $2000, I was carrying 50 Benjamins in my pocket, but once again, we were without tickets.

That night, when sharing the story with friends who were also struggling to score tickets, we were chastised for not keeping those uppers. 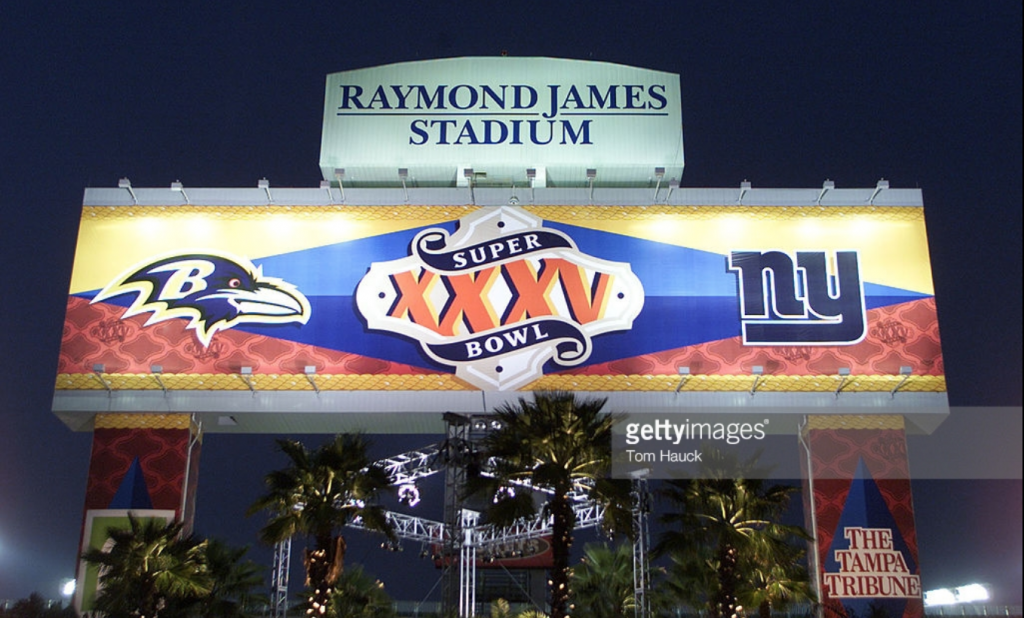 About 3 hours before kickoff we went to Raymond James Stadium to see if we could scalp another pair. The $5000 was burning a hole in my pocket. Things weren’t looking promising. We had offers to buy used ticket stubs after kickoff for $800 each. We wouldn’t have a seat, but we’d be in. Another guy said he could get us in if we pretended to be stadium custodians and wear clothing like they did. That too was $800 each.

Finally, a couple came walking by looking to unload a pair of tickets. The guy’s brother worked for ESPN and gave him the tickets. He said he had no rooting interest in the game but planned on taking the money and betting on the Giants. The seats were 20 rows off the field on the Giants sideline at the 25-yard line.

Coincidentally, the couple was looking for $5000 for the pair.

My buddy and I stood there, debating whether or not to pony up the extra $500. Neither of us said a word.

Instead we looked at each other in a way that said, “Are we nuts? Let’s get those tickets.”

We ran to the couple and made the deal.

As we parted ways, I turned to the couple and said, “If you can’t bet on the Ravens, save your money.”

And then we headed towards the entrance to see the game of our lives.