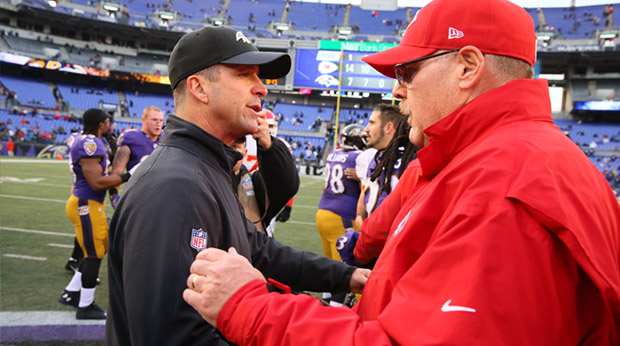 Kansas City Chiefs head coach Andy Reid made a big splash last night and Twitterverse exploded, when the news of the Alex Smith trade broke. In case you missed it, the Chiefs sent Smith to the Redskins for a 2018 third-round draft pick and slot corner Kendall Fuller.

The deal was a major coup for Reid and it could prove to be a deal that makes or breaks the careers of Redskins team president Bruce Allen and head coach Jay Gruden.

The Chiefs benefit by:

Of course, the entire trade was enabled by Reid’s move on Draft Day 2017 when he jumped up to the 10th overall pick to select Patrick Mahomes. The NFL has often been labeled a copy cat league. Might the Ravens follow suit in the 2018 NFL Draft if the right quarterback falls to them?

As for the Redskins, shelling out $71M in guarantees to a quarterback who will be 34 years old when he takes the field in 2018 and owns a (2-5) playoff record, is a risk. The risk for Washington’s front office is made even more pronounced because it signals the end of Kirk Cousin’s career in DC. The respective careers of Cousins and Smith will from this point forward always be compared and contrasted.

Lastly on the trade, it isn’t official until the new league year begins on March 14. So if I was Alex Smith, I just might have to lock myself up in a hyperbaric chamber for the next 42 days.

What Can We Expect?

All eyes will be on Ravens owner Steve Bisciotti this Friday when he takes the stage at the new auditorium in the Owings Mills team headquarters. This State of the Ravens will be unique in that Bisciotti will not be accompanied by Messrs. Newsome, Harbaugh and Cass, per usual.

Cass is generally there to address business issues such as ticket prices and investments made to improve the fan experience. The stadium improvements have been well documented as evidenced by Garrett Downing’s most recent Final Drive. And let’s face it, after 2017’s turnstile, no one really has the stones to raise ticket prices, do they?

Could they lower them?

Harbaugh for all intents and purposes has said his 2017 peace during his presser on January 4th and Ozzie Newsome takes to the media the way a vampire takes to sunlight.

Is it just me or does Ozzie get a hall pass when it comes to accountability?

This is just a gut feel, but 2018 seems like Ozzie’s swan song. He just seems like a tired GM.

But back to the presser, when all is said and done on Friday and Bisciotti leaves the stage, fans will be left wanting more and unfortunately there’s not a lot that can be done before September to get the Ravens faithful excited save a big free agent signing or a couple of bold moves during draft weekend. And that just hasn’t been the Ravens M.O.

Maybe that’s why the Ravens tucked this presser away on a Friday afternoon just prior to the Super Bowl.

Back to DeCosta for a moment, he sure does seem to be the regular whipping boy of 105.7 The Fan’s Vinny Cerrato, who views the Ravens Assistant GM as unnecessary and has directly and indirectly fingered DeCosta as the scapegoat for the team’s recent struggles in the early rounds on draft day.

Cerrato has suggested that the decline in Ozzie’s war room prowess can be traced back to the departure of Phil Savage as if Savage was the college personnel mastermind. If true, why isn’t Savage still employed by an NFL team? Why hasn’t he been invited back to rejoin the Ravens front office?

And for that matter, if Cerrato is so in touch with what it means to be an effective front office executive in the National Football League, why is he co-hosting a non-drive time, 10AM-2PM sports talk show in the nation’s 21st-ranked market?