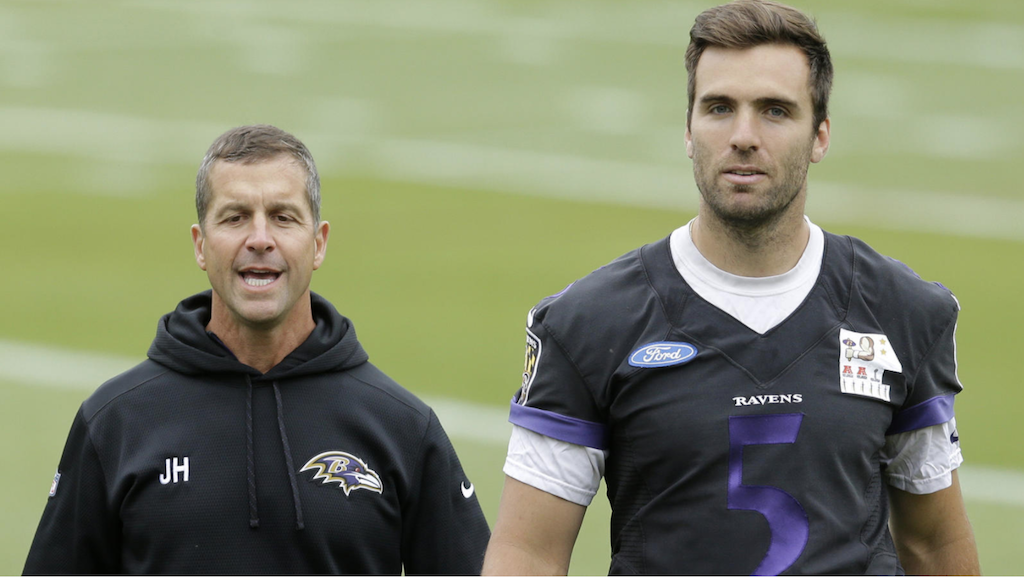 What Can The Ravens do With Joe Flacco’s Contract?

It’s all Flacco, all the time.

Well, maybe not all the time, but whether it’s on social media, message boards, sports talk radio or the water cooler, Joe Flacco‘s contract is always a hot topic.

So, in an effort to clear up any misconceptions (this isn’t rocket science nor will it approach top essay writers for students) and provide some context, this Q&A is going to be all about Flacco and the various scenarios that are available to the Ravens this year and into the future.

Q. Is it possible to cut Joe Flacco this year?

ANSWER: Anything, of course, is possible, but releasing Flacco now is pretty much Salary Cap suicide. Flacco currently carries a 2018 Cap number of $24.75M. If Flacco is released (prior to June 1), the Ravens will have to account for $28.75M in dead money, which will all hit the Cap in 2018. As such, Flacco would actually cost them more against the Cap if they release him than he would if they keep him.

Even a post-June 1 release wouldn’t make great Cap sense. It would allow the Ravens to create $12M in Cap space for this year, but would push $16M in dead money onto the 2019 Cap. That’s a ton of dead money from one move and it’s unlikely the team would be interested in taking on that much. As a point of reference, the most dead money the Ravens have ever taken on in one transaction was Ray Rice at $9.5M (obviously, an unusual situation) and Haloti Ngata ($7.5M). Using a June 1st release designation on Flacco would create an amount much greater than those.

During his press conference a couple of weeks ago, owner Steve Bisciotti made it pretty clear that he does not feel that Flacco is the biggest problem or concern the Ravens have at this time. And, even if that wasn’t true, the Salary Cap implications make it pretty obvious that Flacco is going to be here at least through the 2018 season.

Q. Could Joe Flacco take an outright pay cut? Is that remotely possible? If he does how much space can be created?

ANSWER: Can he take a pay cut? Sure. Will he? Not likely. Let’s get this out of the way right off the bat. Players rarely take a pay cut unless forced to do so. In Flacco’s case, as explained above, the Ravens have no leverage to try and force a pay cut since the threat of release would ring hollow.

The only real example of a player “voluntarily” taking a pay cut was Peyton Manning in 2015, when he agreed to reduce his salary by $4M to create Cap space for the Broncos. Of course, Manning was basically a year from retiring and clearly was willing to do so for a shot at another Super Bowl title. However, the $4M in salary that Manning agreed to give up was replaced by incentives that allowed him the opportunity to earn that $4M back. Had Manning earned them (remember, he was hurt for much of the year) he wouldn’t have really given up anything and the Broncos would have been charged that $4M against the following year’s Cap.

So, if the Ravens could possibly convince Flacco to take a pay cut, he would likely want incentives in return that would allow him to make that money back. As such, if Flacco has the season that most Ravens fans hope he’ll have, he’ll very likely earn the pay cut back and that amount would count against the 2019 Cap. So, basically, it would only shift Cap space from one year to the next, but not actually save any Cap space over the 2-year period.

Obviously, even if Flacco would agree, a pay cut is not exactly the panacea that many would like it to be.

Q. What about trading Flacco? Couldn’t they do it after June 1st to create additional Cap space?

ANSWER: From a Cap perspective, a release and trade are treated the same, so a trade will not provide any additional Cap relief. It would also push the same $16M dead money onto the 2019 Cap. Also, the $12M in Cap savings, whether by release or trade, would not be available for the team to use until after June 1, at which point, the free agent market is pretty much just a scrap heap.

Also, given the future salaries in Flacco’s deal, it’s highly doubtful that another team would offer much in trade compensation nor would they likely be willing to wait until after June 1st to get Flacco into their facility.

So, all in all, a trade is just as unlikely as a release.

Q. If moving on from Flacco isn’t possible this year, when is the earliest they can reasonably do so?

This would clear $18.5M in Cap space, albeit, most of it available until after June 1. That said, with that much Cap space then available, and with not much to spend it on at that time of the offseason, the Ravens would likely carry a large amount of that over into 2020, which could be used to help offset the $8M in dead money that was pushed onto the 2020 Cap.

That’s still a lot of dead money to take on, whether it’s the entire $16M in 2019 or split between 2019 and 2020, but this is where another variable comes into play. Salary Cap discussions mainly focus the Salary Cap implications of contract, but often don’t focus on the actual outlay of cash. In Flacco’s case, his 2019 base salary is scheduled to be $18.5M and if 2018 isn’t an improvement over this past season, it’s very possible that the Ravens won’t be willing to pay him $18.5M in cash and would be willing to take on the $8M in dead money in 2019 and 2020 in order to avoid that outlay. The Ravens have already invested a lot of money over the years in Flacco, but at some point, they may feel that they are throwing good money after bad – and a 2019 salary of $18.5M might just be that breaking point if his play hasn’t improved.

Q. You’ve mentioned the possibility of restructuring Flacco contract to create Cap space – how much would it create and what impact would it have on the future?

ANSWER: A simple restructure – exchanging base salary for a bonus, with no money lost – for Flacco would create $8.25M in new Cap space. It would be accomplished by dropping his $12M base salary down to $1M and turning the $11M difference into a signing bonus that would then be prorated for Cap purposes over the 4 remaining years of Flacco’s contract. This would reduce his Cap number down from $24.75M to $16.5M.

Needless to say, that’s a substantial amount of Cap savings.

So, the remaining years of Flacco’s contract would go from this:

This illustrates the drawback to restructures – increased future Cap numbers and more dead money to deal with if the player needs to be released.

So, a restructure for Flacco has both its advantages and disadvantages, but if the Ravens already envision having Flacco as their starting Quarterback until at least 2020, a restructure that creates that kind of substantial Cap savings would likely be something to consider.

Q. If the Ravens want to hold on to Flacco further than his current contract, wouldn’t they be able to give him an extension and generate more cap space for this season?

ANSWER: Flacco still has 4 years remaining on his contract and will be 36 years old in the last year of the deal. As such, an extension seems unlikely, although sometimes teams will essentially add “phony” years via a contract extension to help create needed Cap space.

An extension is different from a restructure though because it adds new years to the deal and also usually includes new money, via a signing bonus that is larger than the present amount of money due. This makes it different than a restructure, which is essentially just moving the same amount of money around in an accounting exercise. More upfront money is usually included in an extension because the player is giving up free agent years when doing an extension and that needs to be compensated in some way.

Given that Flacco’s play has been erratic over the last couple of years, adding new money to his deal would seem like an unwise choice and could come back and haunt them in the future.

Editor: Got a question for Brian? Send it to info@russellstreetreport.com or post it in the comments sections below.