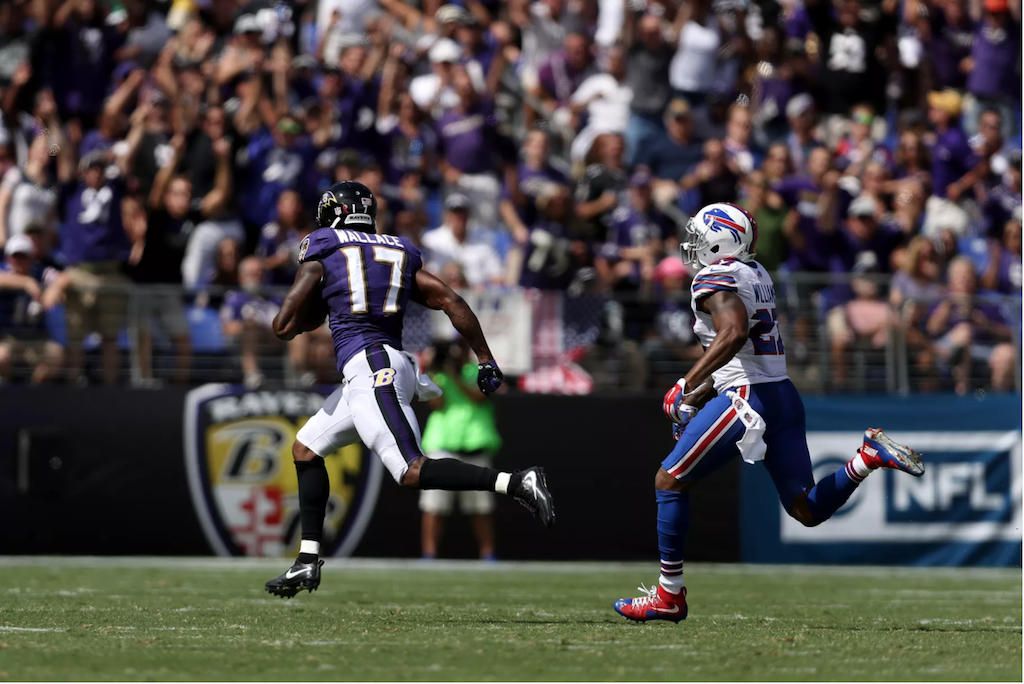 It’s no secret who’s on the wish list of every Ravens fan this offseason.

What was his name again? Gosh darn it, I forgot already!

I know his first name starts with a ‘J’, and I believe his last name has something to do with ‘laundry’. 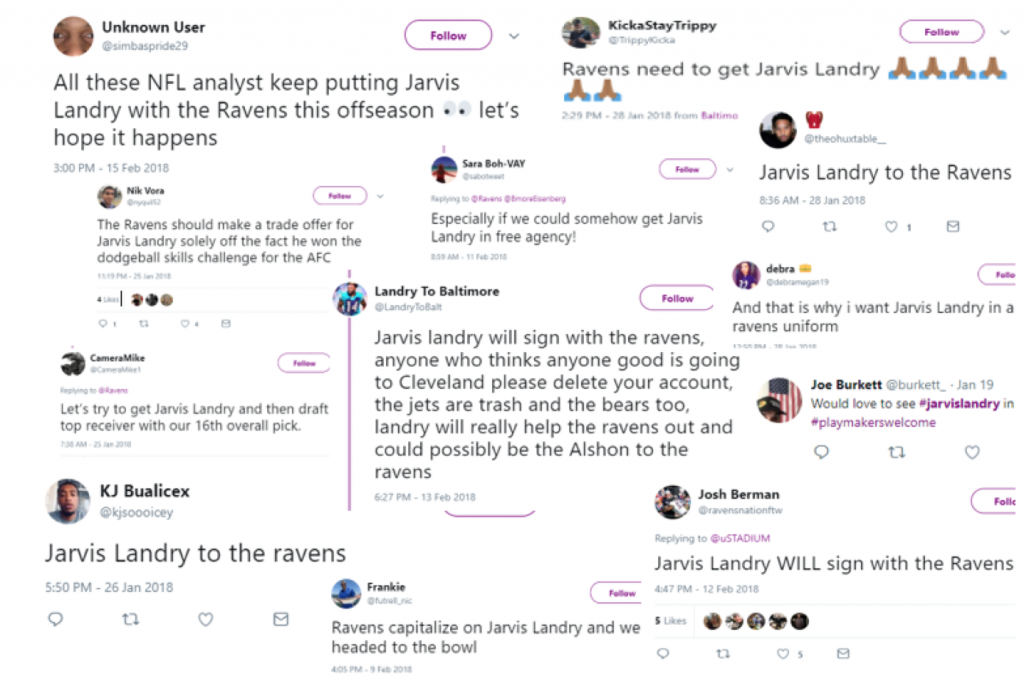 Ever since reports surfaced that the Ravens tried to trade for him last offseason, fans have not stopped gushing over the possibility of landing Jarvis Landry. The WR corps is in desperate need of an overhaul and the athleticism and big-play ability of Landry would be an exceptional addition to the unit.

But based upon his estimated market value and the team’s challenging salary cap constraints, you would have to ask yourself if Landry is even in the realm of possibility for the Ravens.

And before we start getting into salary cap surgery, check out this thread by Brian McFarland. Clearing up room isn’t as simple as you may think.

Although Landry would look nice in purple and black, it’s about time we start tempering our expectations to something more realistic.

Here in Baltimore Ravens fans are so desperate for a receiver, they are acting like Jarvis Landry is second coming of Jerry Rice.

This fan base is hungry for a star receiver, but you always have to start from somewhere.

Let’s start with one player who Ravens fans don’t seem to be talking about enough. If the team wants to add a WR that possesses good value, proven chemistry with Joe Flacco and will make an instant impact on the offense, then it’s within their best interest to not sign, but re-sign…

It’s beyond mindboggling to see how sparingly Ravens fans have expressed their desire to bring back Wallace. Among a nightmarish group of WRs, he was easily the most productive player in the unit and it’s a shame that this has mostly gone unnoticed.

Wallace finished his 2017 season with a team-high 748 receiving yards and 4 TDs. These numbers are solid but don’t necessarily paint the entire picture.

Usually known for just his speed, Wallace has gradually transformed into a dependable target to move the chains. Out of his 52 receptions on the year, Wallace caught a team-high 33 receiving first downs. Ten of those receptions were third down conversions, thus emphasizing the reliability of Wallace and his clutch factor in critical situations.

But let’s not forget about Wallace’s ability to stretch the field, which allowed him to average a healthy 14.4 YPC and, subsequently, showcase a handful of monster performances.

During Week 5 against the Oakland Raiders, Wallace set the franchise record for single-game receiving YPC with a whopping 44.3-yard average. This came as a result of three deep balls that were caught for 27, 54 and 52 yards each. It was also one of the four times last season where Wallace caught for more than 70 yards in a game.

Again, Wallace may not be the flashiest name among the 2018 free agent WR class. But what more could you expect from a player who compares statistically to the likes of A.J. Green?

As of now, Wallace and Green are the only active players in the NFL with a career 500 receptions, 50 receiving TDs and a 14.5 YPC average. That’s well above industry standard.

Some may criticize these numbers for being inflated by Wallace’s impressive tenure as a Pittsburgh Steeler. However, it would be wise to first consider the fact that Wallace has the most 50-yard receptions in the league since 2016 with 8 catches in that category.

He’s still got it.

Apart from his stats, some of Wallace’s most beloved qualities are his expressiveness and high level of support he has for his teammates.

Wallace firmly stood by Breshad Perriman when fans at M&T Bank Stadium mocked him with Bronx cheers during Week 16 against the Indianapolis Colts.

(Part 1) Fans gave Breshad Perriman the ol’ Bronx cheer after his first catch in the third quarter of Saturday’s win against the Colts. Although he was unaware of the meaning behind the response, Mike Wallace did, and he was not happy.

(Part 2) “That [expletive] is disrespectful,” Wallace said. “I don’t agree with that. I would have flipped them the bird, everybody if that was me. I’m happy he’s not like me. I would have turned around and flipped the bird to the whole stadium. That’s just me. …”

(Part 3) “… I don’t care who likes it or how they feel,” Wallace continued. “That’s disrespectful.  They’re acting like he’s trying to have bad games. That’s the nature of  the business though. To me, I feel like it was disrespectful, but you can’t get too caught up into it.”

Harsh, but this is exactly the type of response you would hope for.

This reflects the unselfish nature of Wallace and the concern he places on his teammates’ well-being. Wallace recognized the substantial amount of criticism Perriman was receiving all season and understood the implications it had on his level of confidence. Ever since Steve Smith Sr. retired, the WR corps has lacked this smash-mouth style of attitude.

For a player who was once labelled as a toxic locker room personality, Wallace has been nothing but the opposite. If anything, Wallace is a fantastic teammate, as he embodies the veteran leadership qualities that are ideal in mentoring young players both on and off the field.

Lastly, it would be unjust to not mention Wallace’s most underrated quality – his toughness.

After suffering a concussion during Week 7 against the Minnesota Vikings, Wallace wasn’t too keen on exiting the game. He argued with the medical staff to let him play and even tried looking through the team’s equipment bag to find his helmet. 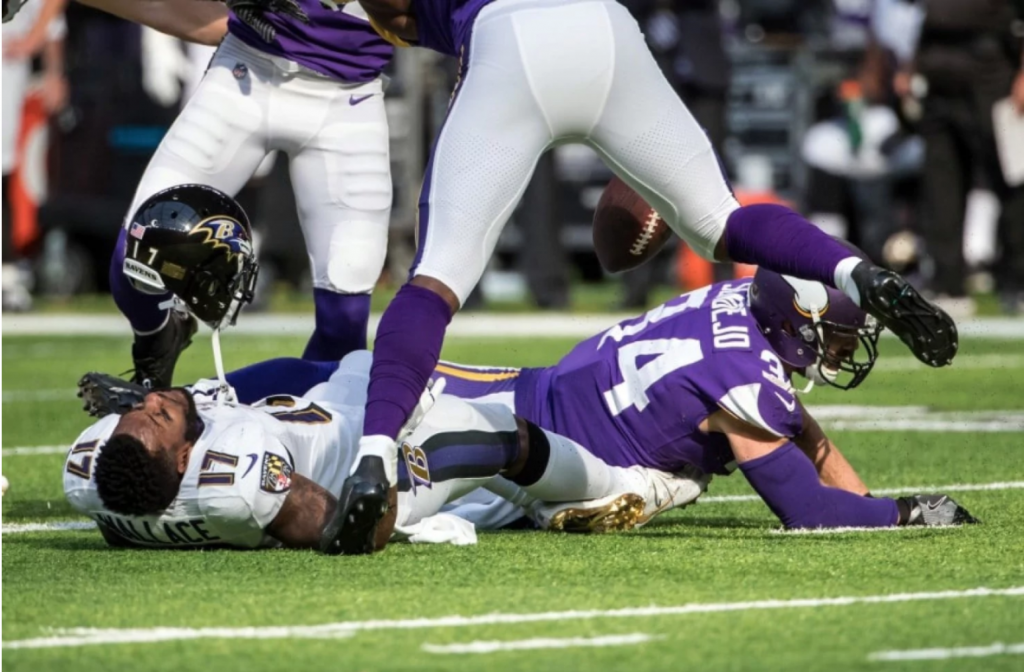 Since Perriman and Jeremy Maclin were both inactive due to injury, Wallace understood how heavily he was depended on and showed his willingness to place the interest of the team before himself. Not the brightest move but you have to appreciate his spirit.

At the end of the day, the Ravens would be happy to re-sign Wallace at the right price.

But nothing is guaranteed.

Baltimore is the place where Mike Wallace re-established his love for football. But when it comes to his love for the Ravens, it may be a feeling that’s short-lived if the team fails to reciprocate properly.

“If they’ll have me, I’ll definitely come back,” Wallace said during the team’s locker room cleanout.

“I’ve made a lot of money. You’re not going to play for pennies, but at the same time, that’s not the most important thing to me. I want to win. That’s going to be my key – just put myself in the best situation I can to win a Super Bowl. Hopefully it’s here.”