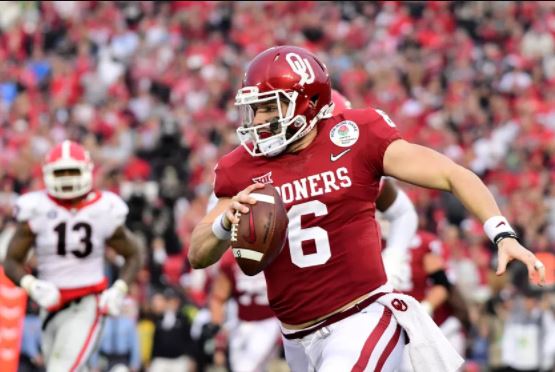 The Ravens absolutely should consider drafting a quarterback in Round One of the 2018 draft.

Most naysayers will harp on the same three points:

— Steve Bisciotti’s personal State of the Ravens, in which he praised Joe Flacco, while insisting that most franchise QB’s play well into their 30’s.

— Ozzie Newsome‘s comments at the NFL Combine about drafting a QB ‘if we’re in that situation.’

Sure. All valid points. Except, we need to take all information into consideration when assessing whether or not a first-round QB makes sense, and the best place to start is the emphasis of every single Ravens draft since the beginning of the Ozzie Newsome era.

Never have the Ravens discussed Best Player Available with caveats. Look no further than 2017, when they opted to draft Corner Back Marlon Humphrey – a clear depth player – over Tight End O.J. Howard– a clear need. Why should we treat the quarterback position any differently in this case? I think there’s a consensus that at the very least, three of the top five QBs are top-10 players overall (Josh Rosen, Sam Darnold, Josh Allen), while Lamar Jackson & Baker Mayfield very well could jump up into that category as well. Should one fall to Baltimore, and they have him ranked as their top prospect… why would they pass on him? Why risk missing out on a top-caliber QB that could be the next 10 years of your franchise, just because you ‘have a guy already’ who is financially bound to the team for at least another year?

Of course those Flacco finances have prompted another argument: If they suck this year, just draft a new QB in 2019!

Let’s take that and expand a bit here – have you seen the QB class for 2019? My guess is no, but say you have because you’re football savvy. Do you think Drew Lock is a lock? Would you grade Clayton Thorson any higher than the current top-5 guys in 2018? While it was easy to love Deondre Fracois in his limited time, are you confident he comes back fully from that nasty patellar tendon injury?

Essentially, there are no guarantees in the 2019 draft class that you’ll be able to land a prospect as good – if not better – than the top guys this year. And realistically, unless the Ravens finish bottom-10 in the league next season, they won’t be assured a shot at any of the top guys in that draft either. If they stick to their 8-8 ways, they’ll have to trade up to get their future QB.

But the biggest knock is that the Ravens need play makers. All the play makers. They need multiple wide receivers, multiple tight ends, and a running back would be ideal… why waste a pick on a quarterback?!

Have we forgotten about free agency?

Everybody wants to pick up the big splashy name, & go get the proven talent so you don’t have to bank on the rookies- something the Ravens have proven is not their strong suit (see Perriman, Breshad). I’m totally game for that! But if you are worried about banking on rookie success… why say we NEED a skill position player first round?

If the Ravens go out on March 14th and pick up Allen Robinson & Trey Burton, suddenly they’ve filled two voids and can easily afford to wait until Rounds 2 & 3 to add skill players, and the best part of that? The disparity between the top wide receiver in the draft (Calvin Ridley) and the next group of guys, including D.J. Moore, Courtland Sutton, Christian Kirk, Auden Tate, Michael Gallup, James Washington, Anthony Miller… it’s marginal, at best. Same could be said of the Tight End group, where Mike Gesicki, Dallas Goedert, Mark Andrews, Hayden Hurst and Troy Fumigali are all good-not-great prospects who can fall anywhere from Rounds 1 through 3, but none are worth the 16th pick.

One more time, I’m going to jump back to the Flacco contract chatter… let’s throw three names out there:

Rivers was drafted by the Chargers while Drew Brees was still the starter, in order to groom him. At the time, Brees was 25 years old, went on to have two phenomenal seasons for the Bolts, then was sent packing to N’awlins before they had to lock him into a big money contract. Likewise, Rodgers was drafted by the Packers while Brett Favre was stilll starting (Rodgers was groomed for 3+ years behind Favre), and Mahomes by the Chiefs while Alex Smith was still on the team and starting the 2017 season, without question. In all three situations, the franchises had the wherewithal to draft for continuity, with an eye on the future. They didn’t wait until the QB play fell off, then decide to be reactive, instead of proactive.

Should the Ravens consider taking a QB in Round 1?

This should be no different in Baltimore, where the Ravens have to see the writing on the wall with Joe Flacco, who has become nothing more than Average Joe. Give the man some play makers, sure, but should his play tank or lack improvement? They can save $8M next offseason by releasing him..

If he plays well, but they know they have a rookie on their hands who can do the same thing for substantially less? The Ravens could do what Kansas City just did, trade Flacco for picks, and utilize a combination of draft capital and saved cap space from his contract to continue to build upon an already strong foundation. Finding a cheap, young QB who can quickly acclimate is integral in today’s NFL. Look at Philly with Carson Wentz, or LA with Jared Goff. Both playoff teams, both play well in free agency, and both deep with talent, as neither has to allocate big money to a quarterback until their rookie deal is up.

LET ME EMPHASIZE: I’M NOT LOOKING FOR A REBUILD.

This is simply saying that should the right player fall into the Ravens laps, and that player happens to be a quarterback, it would behoove the franchise to snatch him up, or they’d regret the decision to steer clear.

Is it likely that the Ravens take this route? Of course not. In everything we’ve heard from the franchise since the end of the 2017 season, their focus seems to be more short-sighted than long-term.

Then again, Stevie Biscuits & friends love to hold their cards close, and in no way does it benefit the team to outright say ‘we want to draft a QB.’ So why would they?