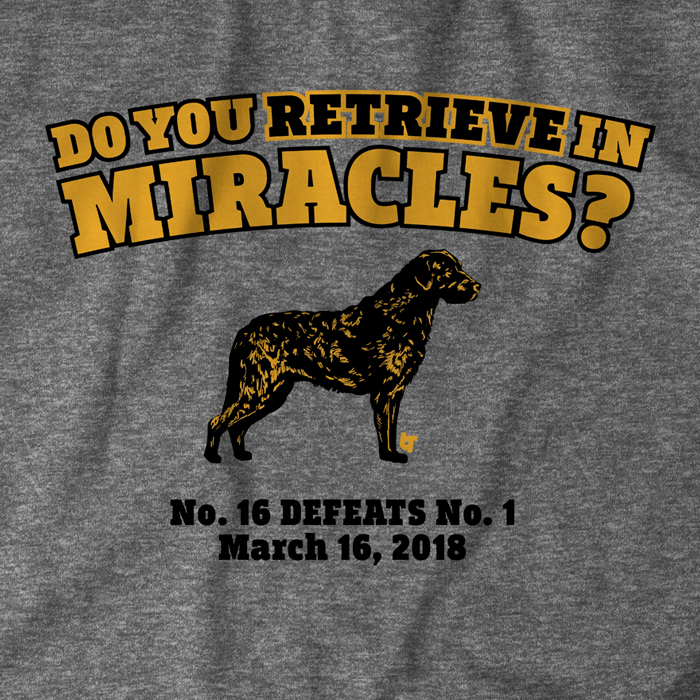 It’s been a rough few months for Baltimore sports fans. The typical “Big 3” that the majority of fans in the area most closely follow – the Ravens, Orioles, and University of Maryland basketball – have all been disappointing.

The baseball team crashed in September and went from wild card contenders all the way to last place. The football team teased us with the potential of a late run, but in the end we were subjected to yet another year of mediocrity and missing the postseason. Then Mark Turgeon’s squad tripped all over themselves all season long on their way to missing the NCAA tournament yet again.

On Friday night, we beleaguered Baltimore sports fans got a jolt of morale from the most unexpected of sources. The UMBC men’s basketball team – yes, UMBC, that’s the University of Maryland Baltimore County (proud alum here, btw, B.S. ’04, M.S. ’09!). The traditional little brother in the area, especially when it comes to sports. The school derided for generations as a “commuter school,” the school known for academics and its chess team, the school that prints “Undefeated” shirts referencing their non-existent football team.

The Retrievers – that’s CHESAPEAKE BAY RETRIEVERS, thank you very much, not Golden, not Labrador, not Duck Tolling – quite literally stunned the world on Friday night, becoming the first #16 seed to EVER take down a #1 seed in the NCAA tournament (men’s edition) when they bested the top overall seed, the University of Virginia, 74-54.

Thanks to our friends at Breaking T, you can commemorate this piece of history with this great new t-shirt! 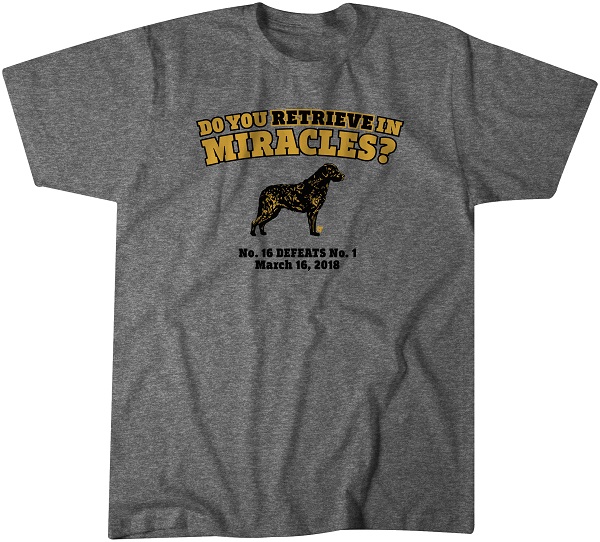 We’ve partnered with BreakingT in the past, so I’ll give you my usual disclaimer: these shirts are super comfortable, soft, and look great. They’re cut a bit small, so you should order an XL if you usually get a L, etc.

Led by second-year coach Ryan Odom, point guard K.J. Maura, and leading scorer in school history (as of Friday) Jairus Lyles, UMBC turned a 21-21 halftime stalemate into a rout by the final media timeout. They were the talk of Twitter and sports media all weekend, thanks to the comedic chops of Zach Siedel, the man behind the @UMBCAthletics account.

Pro: Someone scored a point

Con: it wasn't us

Just a smattering of others who chimed in:

You made history, @UMBCAthletics. And it was freaking awesome.

Thanks for the memories, @UMBCAthletics. Incredible season. Same time next year? pic.twitter.com/meZlqQzCik

"Their name will forever be remembered"

Though the Retrievers’ magical run lasted less than 48 hours – they were bounced on Sunday night by Kansas State, 50-43, in a game that was a nail-biter until the final minutes – they will forever be remembered for making history. Every March, the highlight shows will run clips of UMBC beating the Cavaliers. Every 1-Seed’s coach will show them film of Friday night’s game, reminding them that anything can happen. And every Maryland resident who used to scoff at the little school on the hill in Catonsville will suddenly find themselves wearing black and gold (the good kind) and telling out-of-towners “oh yeah, I had a friend who took classes there!”

Every year, some team wins the World Series, the Super Bowl, the National Championship. Those are all, of course, the ultimate goal. But none of them represent unprecedented HISTORY the way UMBC’s win on Friday night did.

Thanks for reminding us how awesome sports can be Retrievers, and why we watch. It was a completely unexpected, utterly magical, out-of-nowhere weekend of awesome.

I’m off to order a half dozen of those shirts…