Yesterday we learned that Mike Wallace will be moving on from Baltimore, taking his skills northbound on I-95 to join the World Champion Philadelphia Eagles. Wallace agreed to a modest 1-year, $2.5M deal. The signing places the Ravens in a positive comp pick position, having now lost Wallace along with Ryan Jensen while signing just one Unrestricted Free Agent (John Brown).

I appreciate everybody in Baltimore especially my teammates y’all were some real ones! Y’all boyz hold it down!! ???

Wallace was a leader in the Ravens wide receiver room, particularly after the departure of Steve Smith, Sr., and he’s likely to be missed by the receivers who were his teammates during his tenure in Baltimore. But Wallace’s contract suggests that Ozzie Newsome means business when it comes to providing Joe Flacco with the aerial arsenal the team needs to take the offense to a new level.

GM Ozzie Newsome on looking at the WR position this offseason. pic.twitter.com/iJf0pDGx1K

The Ravens could potentially employ a tactic that they haven’t used in the past – signing another team’s restricted free agent(s).

We should learn soon how those efforts play out for Ozzie Newsome. On the surface, the more likely of the two restricted free agent wide receivers to sign in Baltimore is Willie Snead. It might be difficult to place a value on RFA Cameron Meredith due to the severity of the knee injury he suffered during the 2017 preseason. Signing another team’s RFA does not factor into the comp pick equation.

As the World Hurns

Adam Schefter first reported that the Ravens have expressed interest in Jaguars’ cap casualty, wide receiver Allen Hurns. At 6’1 ¼”, Hurns is an inviting red zone target and has corralled 21 TD passes in 52 career games. He’s not an accomplished route runner but he does run with a purpose after the catch and does a nice job of tracking balls in flight. But his history of injuries will make his, a challenging signing.

Another cause for concern – the Jaguars with plenty of cap space ($18.5M per OverTheCap.com), were willing to let Hurns go, opting instead for the underachieving Donte Montcrief.

Besides the Ravens, other teams said to be vying for Hurns’ services are the Cowboys, Jets and Browns, the latter two having significantly more cap room than the Ravens. 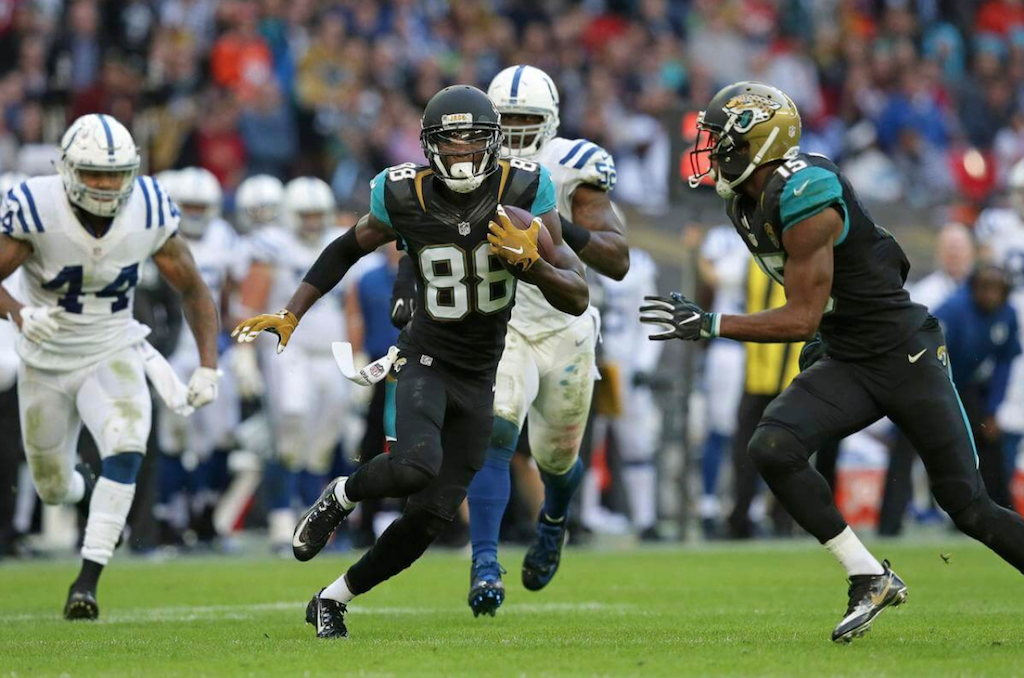 Of course, Ozzie can change that wide receiver room through the draft as well. And he will in 2018. But as we’ve seen during their history, the draft hasn’t always provided a bumper crop of pass catchers. At least not for the Ravens.

A look back at the 2017 NFL Draft shows that there was a premium placed on the position. Three of the top nine picks were wide receivers and shockingly those three, Corey Davis (5), Mike Williams (7) and John Ross (9) COMBINED for 45 catches, 470 yards and 0 TDs during the regular season.

The 2018 NFL Draft is said to be ripe with second and third-round receivers but the first-round candidates (Calvin Ridley, DJ Moore) might not provide value. Time will tell if the shortcomings of last year’s Big 3 will make GMs a little gun shy during this year’s draft.

What Time is Kickoff?

The answer may be that there is no kickoff time in the NFL anymore.

The NFL “brain trust” is considering the elimination of kickoffs and punts, citing statistical evidence of head trauma and soft tissue injuries.

Have a listen to a segment of the Dan Patrick Show below, during which Patrick interviews Troy Vincent, the NFL Executive VP of Football Operations.

Besides eliminating jobs, taking away such special teams plays will strip the league of some of its most exciting players. Think of a league without Billy “White Shoes” Johnson, Dante Hall and Devin Hester.

Remember some of those unforgettable returns of Deion Sanders or Jacoby Jones? Remember the Saints daring onsides kick during Super Bowl 44?

Well they could all be gone.

And many fans could follow, worn down by the gradual wussification of the NFL.