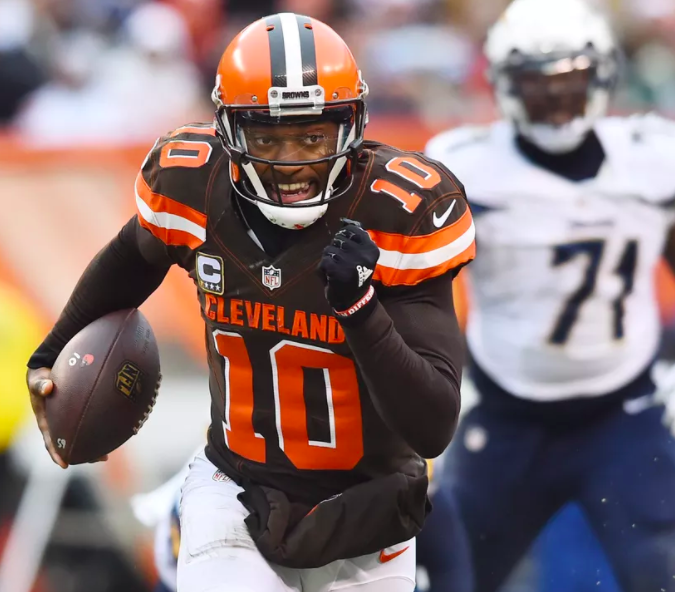 Robert Griffin III is looking resuscitate his career in Baltimore as the backup to quarterback Joe Flacco, according to Dave Ginsburg, of the Associated Press.

The Ravens agreed to terms with the  former Heisman Trophy winner last week. The one-year deal gave the team an experienced quarterback without causing too much damage to the salary cap.

Griffin was the second overall pick in the 2012 draft by the Washington Redskins. After throwing 20 touchdown passes and five interceptions in his rookie season, injuries derailed Griffin’s career. He last played in 2016 for the Cleveland Browns, starting five games. Griffin was behind center the last time the Browns won a game, a 20-16 victory over the San Diego Chargers on Dec. 24, 2016.

Now, he is hoping a beginning in Baltimore will get him back on track to eventually become a difference-maker.

“It’s time to let that stuff go and move forward as a new player, a better player, a grown player,” Griffin said Wednesday at his introductory news conference. “That’s what I’m excited about, and I’m glad that they saw that in me and have given me this opportunity.”

The Michael Campanaro era is officially over in Baltimore.

The River Hill high school alum signed a one-year deal with the Tennessee Titans. He is expected to provide a boost to the team’s return game and also provide depth at receiver.

Campanaro averaged 10.8 yards on 27 punt returns last season. He had a 77-yard touchdown against the Bears. He also averaged 26.5 yards on six kick returns.

The Ravens had not ruled out resigning him, but he found a better deal in Tennessee.

The Ravens’ fanbase is clamoring for the team to take an impact player with the 16th overall pick in this year’s NFL Draft.  Sean Wagner-McGough, of CBS Sports, said those fans will get their wish.

Wagner-McGough predicts in his latest mock draft that the Ravens will take Alabama receiver Calvin Ridley with their first-round pick.

“Suddenly, with Calvin Ridley and Michael Crabtree, the Ravens’ receiving corps doesn’t look so pathetic,” Wagner-McGough writes. “Ridley’s the top receiver in the draft and he fits the Ravens’ plans considering Mike Wallace led them in receiving a season ago.”

However, other draft experts said Ridley’s stock had dropped with a disappointing performance in the NFL Combine. Still, Ravens general manager Ozzie Newsome has an affinity for Alabama players and Ridley does have a huge upside.

Ridley, who caught 55 passes for 896 yards and three touchdowns last season as a junior. Ridley, who is 6-foot-1 and 190 pounds, is effective running his routes and has the speed to get behind cornerbacks downfield.