The Baltimore Ravens will open and close their 2018 regular season schedule by playing home games at M&T Bank Stadium (Week 1 vs. the Buffalo Bills and Week 17 vs. the Cleveland Browns).

Two of the Ravens’ first four games this season will be nationally televised, with both of those primetime contests occurring on the road (including a Week 4 Sunday night special at the Pittsburgh Steelers).

Below are several other highlights of the Ravens’ 2018 regular season schedule:

The Week 4 primetime battle at Pittsburgh (9/30) begins a stretch when Baltimore will play four of five games on the road. (This includes three-consecutive away games from Weeks 4-6: at Pittsburgh, at Cleveland and at Tennessee.)

Four of the Ravens’ first six games will be played on the road, as will five of their first eight.

The Ravens will not leave Baltimore in the month of November, with all three games being played at M&T Bank Stadium. (Baltimore’s bye falls on Nov. 11, marking the second-straight year with a Week 10 bye.)

Six of the Ravens’ first nine games are against 2017 playoff teams. Starting in Week 4 at Pittsburgh, Baltimore embarks on a six-game stretch when it will face five 2017 postseason participants.

The Ravens will play five division opponents in the first 10 games.

All three of Baltimore’s divisional road games will be completed by Week 5. (This is the earliest the Ravens will have ever finished their AFC North Division road schedule, with the previous earliest occurring in Week 9 of 2014.)

After playing five preseason games, including the final three in 11 days, Baltimore will open the regular season by playing two games over a five-day span, with the second game on the road (at Cincinnati).

The Ravens and Steelers will play in primetime for the 12th-consecutive season. In the past 11 seasons, eight Baltimore-Pittsburgh primetime games have taken place at Heinz Field. 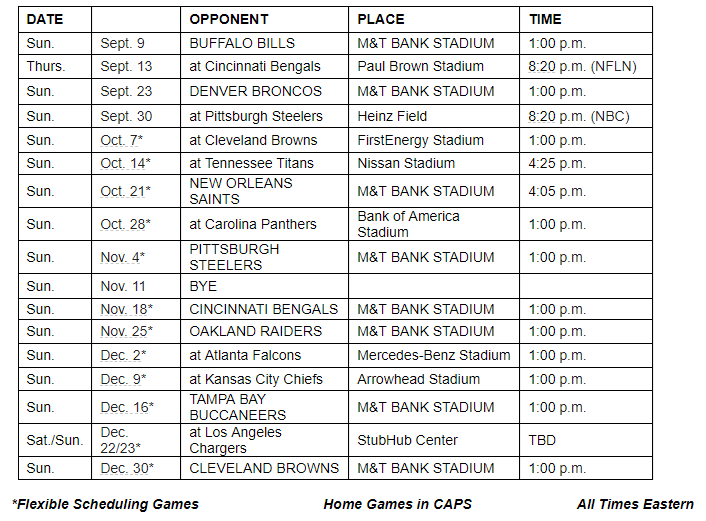 PRIMESPORT, the Official Fan Travel Partner of the Baltimore Ravens, has exclusive home and away game packages for Ravens fans. For more information, please visit PRIMESPORT.com.