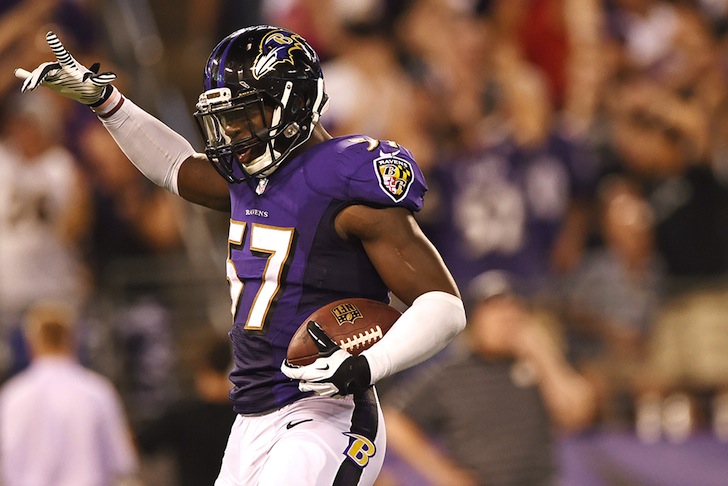 Sometimes the small plays stick out for some reason. Not the highlight clips that get featured on NFL Network Top 10s. I’m talking about the plays that most fans forget over time, but in the moment it’s a brief glimpse of brilliance that makes you think to yourself, “damn, that was really sweet.”

When talking about C.J. Mosley, it’s not easy to pick just one such play.

The play that continuously pops up for me was a tackle for loss that Mosley made on Ezekiel Elliot in 2016 during the Week 11 contest against the Cowboys. Since nobody on the Internet had this clip, I had to find a full game replay, sift through each Cowboys drive, and create a GIF of a tackle that nobody seemed to remember. It wasn’t incredibly special, but there’s a reason it stuck out.

Mosley exhibits two qualities on this play that allow him to be an exceptional run defender – instincts and pursuit. Right off the bat he sniffs out the run play by recognizing LT Tyron Smith initiating a pull. Mosley immediately slices through the B gap, speeds around Smith before he can set his feet and wraps up Elliot for a clean one-yard loss. My favorite part happens after the play when Mosley mimics Elliot’s “feed me” celebration, letting him know that he’ll be there all day. I always thought Mosley was good, but after that, I realized he’s a savage.

It almost seems foolish to write about how invaluable Mosley is for the Ravens. He’s the heart of this defense and has all the capability to deliver standout defensive performances and game-breaking plays.

He’s the most important player on the team other than Joe Flacco.

Mosley plays a vital role for the run defense, with his explosive downhill speed and stout tackling that stuffs RBs at the line. He’s one of the team’s top blitzers and can be a major problem coming off a stunt.

Yet there are those who seem to believe he isn’t worth his estimated market value.

Been saying that it would take at least $10M/yr to lock up CJ Mosley & this would appear to set that as the floor. I'd expect Mosley, a 3-time Pro-Bowler, to be seeking much more. So, question is whether the Ravens are willing to pay $12M/yr or more to keep him a Ravens in 2019. https://t.co/wnuYvx8e7Q

Many fans, including myself, were wondering what the holdup was on a contract extension for Mosley, but it makes sense why he’s in no rush. After the Vikings recently signed LB Eric Kendricks to a 5-year, $50M extension, Mosley must be salivating over the opportunity to eclipse that deal and even become to the highest paid ILB in the league. Mosley is approaching a contract year completely healthy, without requiring any offseason surgery, so he’s more than ready to show the rest of the league why they call him “half man, half amazing.“

If all goes as planned, Mosley could be paid higher than the likes of LB Luke Kuechly. That’s where some fans start to get cold feet. Kuechly averages around $12M per season and since his extension is over three years old, Mosley’s potential ceiling is higher than ever.

Although I do love Mosley, Kuechly is simply in a realm of his own – he’s a perennial talent whom many consider to be the most elite defender in the game. Thus, a degree of hesitance exists amongst the fanbase when it comes to paying Mosley more than Kuechly despite his being on a “lower” tier.

But if that’s what it takes to keep him in Baltimore, then C.J. Mosley is worth every penny.

Since being drafted, Mosley has been the team’s perfect ambassador, representing dominant Ravens defense. He has a strong work ethic, plays with maximum speed to the ball, and maintains the same amounts of aggression and determination on each down.

Sometimes a player’s worth goes beyond the numbers and is reflected by how his presence can change the dynamic of the team. It’s why the Ravens found it necessary to cash in on Brandon Williams – although his stats aren’t outstanding, he’s essential to the defensive line. With respect to Mosley, his communication and ability to diagnose plays and set his teammates is essential to the entire defense. He may seem like the quiet type, but Mosley is the leader this team needs.

Unlike Williams, Mosley also has the tangibles to justify his value.

Since entering the league in 2014, Mosley’s 469 tackles are the 5th most among all NFL defenders. His eight interceptions are the 2nd most by a LB in that same span, while Kuechly leads Mosley by just one. Mosley and Kuechly are the only NFL defenders to record at least 450 tackles, five sacks and five interceptions since 2014. Mosley has tallied six career forced fumbles, one more than Kuechly in two fewer seasons. Although he may have fewer career sacks, Mosley’s eight sacks since 2014 eclipses Kuechly’s 7.5 within that span. Mosley and Kuechly both have two career TDs, and earned each the same way: one through a fumble recovery and the other off a pick-6.

Maybe the two players aren’t as far apart as many believe.

A Down Season and Coverage Struggles

Many considered his 2017 season subpar for his standards, but again Mosley found himself among elite company. Only three NFL defenders – Bobby Wagner, Deion Jones and Mosley – finished the season with at least 120 tackles, 10 tackles for loss, one sack and two interceptions. Speaking of which, those two picks were my favorites from last season – everyone remembers his stellar 63-yard pick-6 against the Dolphins, but he also had an underrated red zone lurk in the home opener against the Bengals.

Despite his interception total, pass coverage is the aspect of Mosley’s game he’s often criticized for. The middle of the field has been the defense’s most vulnerable spot for some time, as underneath routes and checkdown passes have usually been the killer for the Ravens on third down. Much of this can be attributed to Dean Pees giving QBs too much of an opportunity – Pees often dropped LBs deep too often, thus providing convenient checkdown valves with huge cushions to pick up YAC. Pees also made an excessive use of a highly-ineffective 4-man rush that allowed extended plays and blown coverages.

But Mosley is still partially to blame since man coverage has been his greatest weakness since entering the league, especially when assigned to elusive RBs. Mosley recognizes his assignments well but sometimes has trouble with sticking to good route runners like Le’Veon Bell (who doesn’t?) for long periods of time. This inconsistency is why some fans find it difficult to pay Mosley more than Kuechly, when the latter is a far more talented pass defender.

But it’s still unfair to be too critical of Mosley.

And comparing his coverage ability to Keuchley is unfair IMO. Keuchley’s coverage skills are rare. Mosley does struggle at times but I agree that some of that last year was attributable to injury. Let’s see what he’s asked to do under Wink this year. I think CJ will ball out!

Although Mosley was active in all 16 games, he played through a mildly-serious ankle injury during most of the season while also recovering from an offseason shoulder surgery. Hard to be ‘half man, half amazing’ when you literally feel like half the man you are. As injuries also took tolls on the defensive line and secondary throughout the season, changes in scheme also made it increasingly harder for Mosley to play to his strengths. The defense became far too conservative at times and Mosley found fewer opportunities to cause disruption in the backfield.

No Robin to His Batman

Perhaps the most challenging thing for Mosley was losing his exceptional counterpart in Zach Orr to a devastating neck injury. Not only was Orr fantastic in pass coverage, he was considered one of the league’s most promising young defenders. This list from NFL on Fox even ranked Orr as their 25th best NFL player under 25-years-old. The two would have easily been the best ILB duo in the league. Just a terrible loss.

With no competent WLB replacement, it hasn’t been easy for Mosley to man the middle. Peanut Onwuasor is still raw and never offered the same coverage skills as Orr in his 16 starts last season. Kamalei Correa is simply playing a position he shouldn’t. Anthony Levine occasionally had snaps in the dime spot but this exposed weaknesses in the ground game. Tony Jefferson wasn’t brought into the box nearly as much as expected.

The WLB spot has been grossly ignored by the Ravens and must be a prioritized as the Draft nears. Mosley was at his best playing alongside players like Orr and Daryl Smith, who allowed him to flourish as a run defender and alleviate pass coverage duties over the middle. Mosley deserves some slack after this drastic drop-off in talent.

The Bottom Line – Pay the Man!

Regardless, this flaw should not overshadow how fantastic of a player Mosley is. The defense thrives off his ability to shoot the gaps and limit ball carriers from big gains. His value to the Ravens cannot be expressed enough and losing him would be an absolute disaster. How bad of a disaster you may ask? Think of the Steelers defense after losing LB Ryan Shazier – they allowed the Ravens 152 rushing yards, 269 passing yards and five all purpose TDs during their Week 14 meeting. Imagine that every single week.

There is literally no replacement for what Mosley offers. His knowledge of the defense and ideal fit in Wink Martindale’s remade scheme isn’t something you can just find off the streets. Even if the Ravens use their first round pick on an ILB, there’s no guarantees a player like Leighton Vander-Esch, Rashaan Evans, or even Tremaine Edmunds will transition into the player Mosley is.

Should the Ravens re-sign C.J. Mosley?

Although his price may be higher than what some fans would like to pay, that’s just the nature of a dry ILB market, composed of players who aren’t near Mosley’s level. He may have voiced his desire to stay with the Ravens but ILB-needy teams with more cap space like the Rams or 49ers might aim to court Mosley with more lucrative offers. After finishing second in the 2014 Defensive Rookie of the Year voting and earning three Pro Bowl nods in his first four seasons, Mosley will garner serious interest if the two sides don’t agree on an extension soon.

C.J. Mosley is more than just a special football player, he’s imperative to the success of the Ravens. If you want the best for this team, then you should want Mosley here in Baltimore regardless of how much it costs.

You all should too.