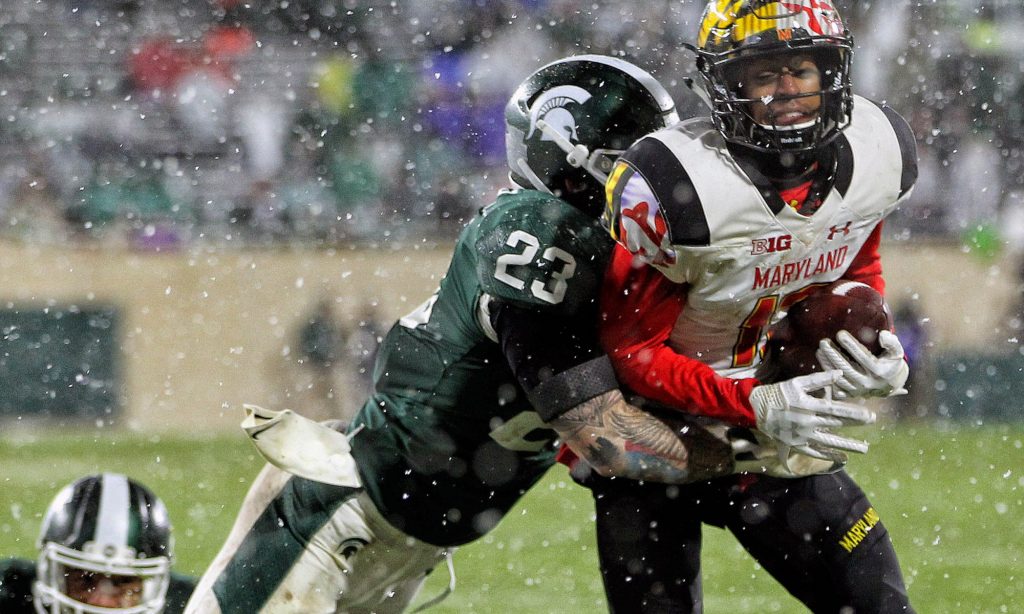 This is a list of players who could realistically be there when the Ravens pick.

As a result, several players — such as Minkah Fitzpatrick, Roquan Smith, Tremaine Edmunds and Bradley Chubb — will likely be taken before the 16th overall pick and therefore, do not make either list.

D.J. Moore, wide receiver: It would be great that in Ozzie Newsome‘s last draft, he finally hits on the one position in the draft where he’s regularly missed. Moore, who put up big numbers at Maryland with bad quarterback play, could end that drought and develop into a number one.

Marcus Davenport, defensive end: Terrell Suggs will be 35 this season, and at some point, you need to find the next great pass rusher. Davenport is it! He is extremely raw, but his ceiling is too high to ignore. Even though Tyus Bowser and Tim Williams were drafted last year, Davenport is more physically gifted than either one.

Derwin James, safety: Not a position of need in 2018, but definitely for 2019. James is special because he can play the run, cover the tight end, blitz the QB and in a pinch, he can play the free safety spot. If James is still on the board at 16 he would be the typical Best Player Available pick.

Mike McGlinchey, offensive tackle: I know, I get it, there is nothing sexy about selecting an offensive lineman. The reality is, in order for the new receiving group to be productive, the Ravens need to keep Joe Flacco upright. McGlinchey is a better option than James Hurst as the starting right tackle.

Dallas Goedert / Mike Gesicki, tight end: Either of these players would be great. Goedert and Gesicki are what NFL tight ends should be these days — oversized wide receivers. Both can make plays at all three levels (short, intermediate, and deep) of the field, haul in the contested catches and be a threat in the red zone. This is the only position of need that the Ravens have not addressed this offseason.

Lamar Jackson, quarterback: No offense to Jackson (though he does own a career 56.8 completion percentage) selecting him would make my head explode. With a lame duck coaching staff and a change at GM after the season, drafting the QB of the future, when the future is not clear, makes no sense. The Ravens have bigger areas of need to address in the first round (Sorry Adam!).

Hayden Hurst, tight end: Hurst will be 25 when the season starts and 30 when his rookie contract expires if the fifth year option is picked up. You have to wonder at this age, has he already peaked? What you see is what you get? Nick Boyle and Maxx Williams who are both entering year four in the league will be 25 as well opening day. Hurst would not be a bad pick in the second or third round, but I will pass in the first.

Kolton Miller, offensive tackle: The ultimate boom or bust guy. Five scouts will say he is great and five more will say he is just ok. Put on his game tape and you don’t know what you will get from one drive to the next. He has ideal size (6’8” 310 lbs) to dominate at right tackle, but he just does not show enough consistency for the Ravens to risk selecting him.

Rashaan Evans, linebacker: Not because Evans won’t have a good NFL career, but simply the Ravens don’t need C. J. Mosley 2.0. Evans is almost a carbon copy of Mosley with his skill set. The Ravens should invest in another inside linebacker, but one with better cover skills than that which Mosley or Evans brings to the table.

Da’Ron Payne, defensive tackle: You could replace Payne’s name with, Taven Bryan, Maurice Hurst or Vita Vea. It doesn’t matter, the last thing the Ravens should draft at 16 is a defensive tackle. Steve Bisciotti specifically said the team would not take one in the first round, but what if Ozzie changes his mind. After all, Payne is from Alabama.

What do you think?

Who would you love or hate to see the Ravens take at 16?