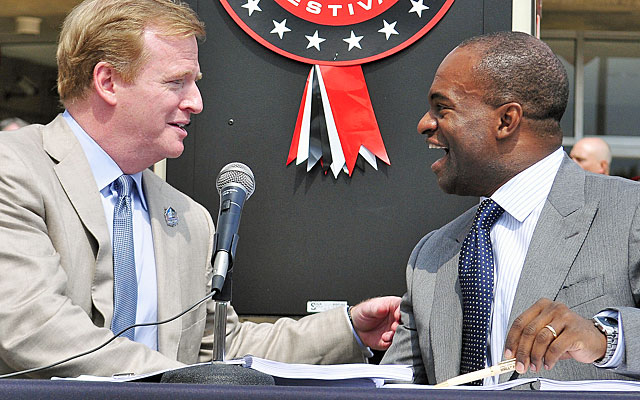 Years ago, during my time in corporate finance, a mentor, Lou Filippo once asked me, “When you take a customer to lunch, who finishes their meal first?”

Me: “Because I’m asking questions in order to learn more about my customer’s business. He can’t eat if he’s talking.”

If only Lou had been Roger Goodell’s mentor.

The NFL has been in a steady decline while on Goodell’s watch. Sure, The Commish will point to some stats to thwart that notion and spew words about improving the fan experience. But at the end of the day, it’s all lip service. The only thing Goodell genuinely cares about is the league’s bottom line and if that continues to remain healthy, it will be used as proof that the NFL is as strong as ever.

The signs are all around us, including thousands upon thousands of empty seats in stadiums across the country. (Just ask the Ravens how ticket sales are going). TV ratings are circling the drain.

Each offseason the league adds new rules, allegedly to improve the game and player safety. But the changes only seem to weaken the game, slow it down and chip away at the fabric of the very same fan experience that Goodell pretends to be so concerned about. Perhaps he is concerned, but only insofar as it relates to the league’s income statement.

Game officials are often in a state of confusion as they adapt to the ever-changing rule book. Just imagine how perplexed they will be when trying to implement the new “lowering the helmet” rule. It will only serve to slow down the game even more. Stoppages will multiply as will fan discontent.

Thankfully for the NFL, they can rely on fantasy football and online gambling. But the windfall from each doesn’t help to put butts in stadium seats. It only serves to inflate viewing statistics that the league can present to its corporate sponsors. When will the sponsors see through it? And when they do, will they pull back on advertising and if they do, how will it affect the next Collective Bargaining Agreement when there are fewer ad dollars to go around, thus compressing the salary cap?

The NFLPA won’t be happy. They will push back.

The odds of a strike or lockout are certainly better than those of online video slots.

The NFL’s own Red Zone shown on NFL Network, has changed the way fans view games at home. Instead of watching individual games, many prefer the Red Zone because it cuts out the swelling number of stoppages. It’s like a 6-hour highlight reel. Oh, and they constantly remind us that they are “commercial free”.

What’s up with that Rog?

But lip service clichés like, “fan experience”, “integrity of the game” and “player safety” don’t just belong to Goodell. His counterpart who heads up the NFLPA, has also been known to pull the wool of the eyes of his constituents.

In an editorial published by the Washington Post, Deborah Epstein, co-director of the Georgetown University Law Center’s Domestic Violence Clinic, explains why she resigned from the NFLPA’s commission on domestic violence.

“I simply cannot continue to be part of a body that exists in name only.

“I worked with Lisa Goodman, a Boston College research psychologist with experience working with survivors of intimate-partner violence, to conduct a national study of players’ wives and their suggestions for dealing with family violence in this particular, high-profile community. At the NFLPA’s insistence, we signed a confidentiality agreement that prevents us from publicly discussing our research findings. But we made numerous systematic recommendations of concrete steps that would go a long way toward dramatically lowering the risk of domestic violence in professional football. That study was completed two years ago, in June 2016. Since then, despite my numerous requests, the commission has met only three times. As of our last meeting, the NFLPA had not implemented any of the reforms proposed in our study.”

In her op-ed Epstein goes on to explain that, “When I was asked to join the commission, I told NFLPA Executive Director DeMaurice Smith that I was leery of associating with an organization that might just be paying lip service to the defining issue of my career — so that, in essence, the NFLPA could say it was confronting domestic violence abuses long enough for the Rice story to fall out of the news cycle. Smith assured me, repeatedly, that this commission would be a serious working group and that our efforts would help produce necessary reforms. But clearly that has not been the case.

“Authorizing a single study, and then burying it through a confidentiality agreement and shelving its recommendations does not constitute meaningful reform. Because I care deeply about violence against women in the NFL and beyond, I can no longer continue to be part of a commission that is essentially a fig leaf.”

Both Goodell and Smith come off as frauds. They insult the intelligence of the fans, their customers, with their equally disingenuous ways. They are modern day snake oil salesmen atop broken soap boxes where they talk and talk, not even realizing that they’ve been exposed.

Their failure to listen will one day soon prove costly.

And neither will ever finish lunch first.