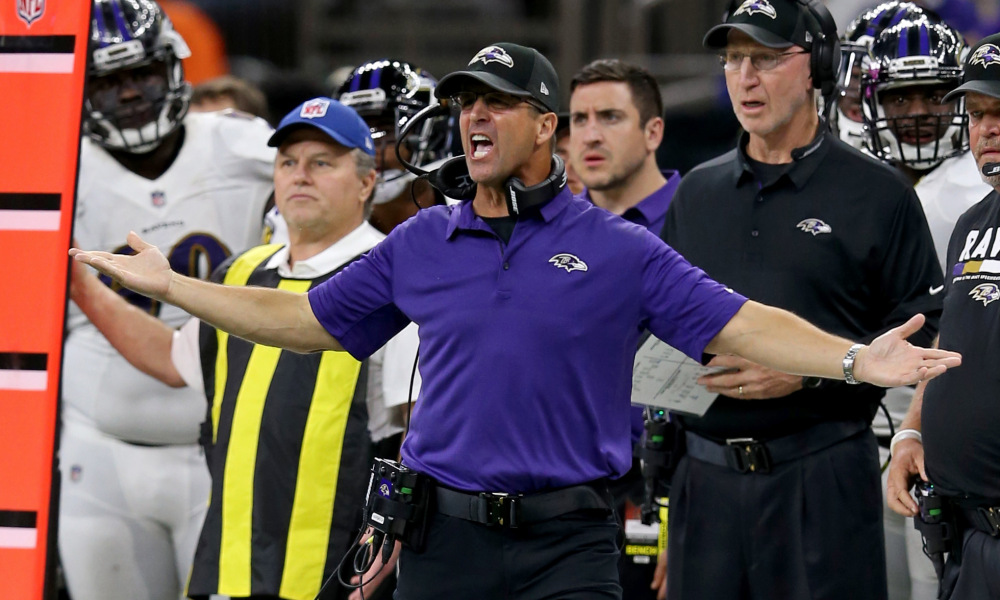 Ravens coach John Harbaugh is one of the longest tenured coaches in the NFL … and also one of the most penalized, according to a report by Jonas Shaffer, of The Baltimore Sun.

Earlier this week, Harbaugh, who was hired in 2008, had to cancel an offseason practice for the third time since 2010. The most recent infraction occurred because of contact among players that violated league rules.

“We take very seriously reading, understanding, abiding by and playing by the rules. Our coaches, staff and players have worked extremely hard to run the offseason program according to all the Collective Bargaining Agreement rules,” Harbaugh said in a statement. “Our team has been singled out for pass coverage contact during the early part of OTAs. We have heavily emphasized these CBA pass coverage rules in meetings, and coached them diligently on the practice field. It has also been our priority to include our veteran players, along with new Ravens who have practiced and played for other teams, in the process and use their input and ideas.

“Even with consistent and repeated teaching, these rules pose considerable adjustments for the young players. We have tried very hard to eliminate contact in pass coverage during OTAs, even so far as to pull players out of practice who struggle with these adjustments. I am confident we have done everything within our power and ability to practice within the rules, and we will continue to focus on preparing, teaching and practicing the right way.”

The Ravens also had to cancel an offseason camp in 2010 after the NFL Players Association filed a complaint over the “intensity” of their offseason workouts and the amount of time players spent at the team’s practice facility.

In 2016, Harbaugh was fined $137,223 and the Ravens lost three OTAs for having rookies in full pads for the start of a minicamp practice.

Harbaugh and Bill Belichick are the only two active coaches that have been disciplined three times for violating the OTA rules, according to The Baltimore Sun.

A recent article by CBS Sports said the Ravens are a “sleeper with Joe Flacco, sleeping giant with Lamar Jackson.”

Jackson could provide the energy the team needs to get back into the playoffs after a three-year absence, according to the report.

“Might be starting to like the Ravens as a sleeper this year, which is not my M.O,”Will Brinson writes. “It might depend on the offense and the team staying healthy — remember, they battled a crazy rash of injuries last year in training camp — but eight wins seems too low for a team with talent on both sides of the ball, a potentially strong defense and run game and the upside that’s built in with Jackson.”

Williams Ready for Break Out Season

Ravens linebacker Tim Williams is poised to have a big season, according to teammate Brent Urban.

“He’s a guy I’m really excited to see,” Urban told RavensWire. “He’s everywhere and has been getting in the backfield constantly.”

Williams appeared in eight games and finished with six tackles last year. The Ravens expect him to make a bigger impact this season, especially with his pass-rushing skills.