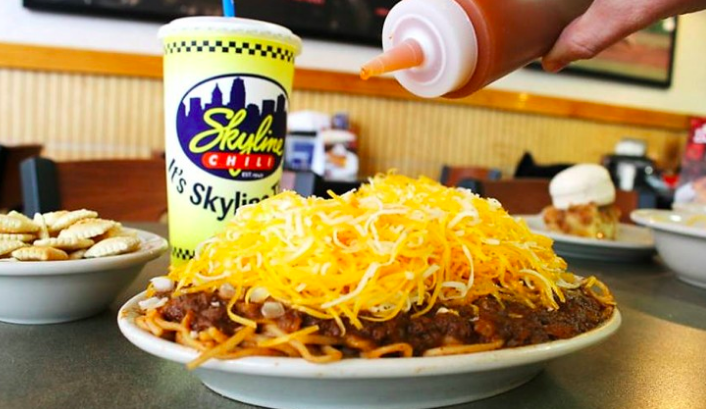 Hopefully the focus can be on tonight’s game, but you just know they’re going to show that lowlight enough to make you want to puke.

Here are all the stats, quotes, notes, and more to get you ready for Ravens-Bengals. Here’s to revenge. 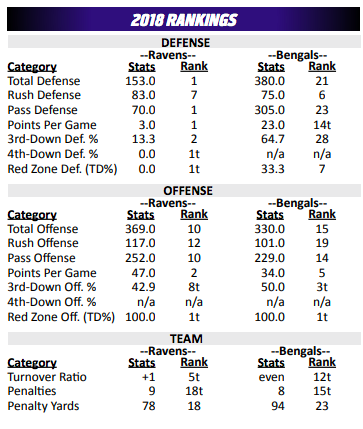 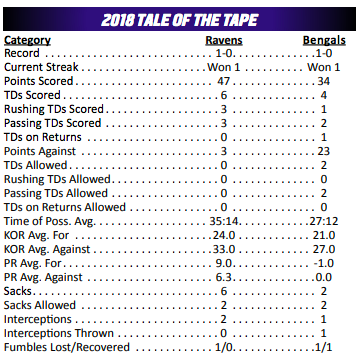 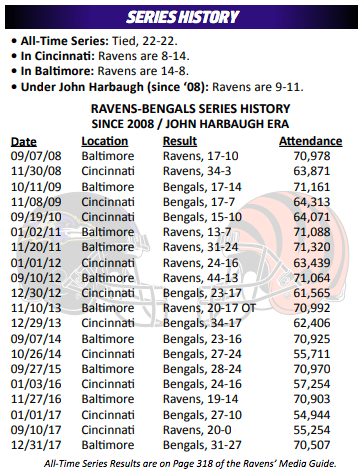 “The best way I can describe Tavon: He’s a pit bull. He does everything that you want a slot corner to do. He covers well. He tackles well. He knows the defense inside and out. He understands situations better this year, just with his experience. You need a smart, crafty guy to play nickel for you, and we have a couple of them.”

ILB C.J. Mosley on why he thinks OLB Tim Williams, who had a sack in Week 1, will have a breakout year:

“He’s definitely getting more reps out there. Maturity is definitely the biggest thing. Having that extra year in the league to learn and grow as a man and as a player. You really haven’t seen his set of skills. You saw it a little bit in the preseason, but once he really gets it going in the game, we’re going to have another pair of legs on third down late in the game. He’ll be one of our guys to be able to make those type of plays.”

“He lets his coaches coach. He lets you be yourself as a player, but you don’t cross that line. He was fantastic; I enjoyed him. He knows I enjoyed him. There are just not that many coaches that are of the pedigree that John is. He’s that good of a coach. … I’ve been around a lot of head coaches, and John Harbaugh is one of the better head coaches that I played for.”

GETTING TO KNOW YOU~ Q&A with Brandon Williams

You’re a fan of the theater. Do you have a dream role that you would love to play?

“Mufasa from ‘The Lion King.’ That would be awesome! I’ve always loved ‘Lion King’ growing up – that’s my favorite movie. I just love it. I hold my son up like Rafiki does with Simba, like, every day.”

What is the weirdest meal you’ve ever had?

“When I was a kid, I thought it would be smart to make a jelly and mustard sandwich. I don’t know why. It was grape jelly, but it was disgusting. I got my brother to eat it, and I got one of my cousins to eat it, and they threw up instantly. It was all bad.”

Where’s one place you’ve never been but always wanted to go?

Who would you want to compete against in a lip sync battle?

“My only competition would be Justin Tucker. He’s so animated. Matthew Judon would be good at that, but I’d probably go against Tucker. I don’t know what song I would do. It would have to be something energetic and fun where I can move around – because we’re lip syncing, it’s not like I have to sing. Something with a lot of emotion that I can get into. Maybe Taylor Swift’s ‘Shake It Off’ or something.”

What’s one thing that’s guaranteed to make you smile?

What constitutes as a perfect day for you?

“I would say, waking up in the morning – probably cooking breakfast for the family, getting the boys off to school, spending some time with my wife. Maybe running errands or something. Probably getting some time to myself, too, maybe take time for me and my wife to watch a movie or a TV show.”

If you could wake up having gained one ability or quality, what would it be?

“Super strength, obviously. I like The Incredible Hulk. But I also love Wolverine with his claws and how he’s indestructible.”

What is the last thing that made you laugh out loud?

“My kids playing hide-and-go-seek yesterday. It was the funniest thing ever. First of all, they weren’t hiding very well. Second of all, my son is a cheater. He likes to count and look [through his fingers]. I love him to death, but still. That was the highlight of my day yesterday.”

Bengals CB Tony McRae spent part of the 2017 season with the Ravens and played in four games, after serving two games on the practice squad.

By managing to ruin both spaghetti AND chili.

We made homemade “Skyline Chili” last year when the Ravens and Bengals met in Week 1. It was new and interesting and I see no reason to ever do it again.