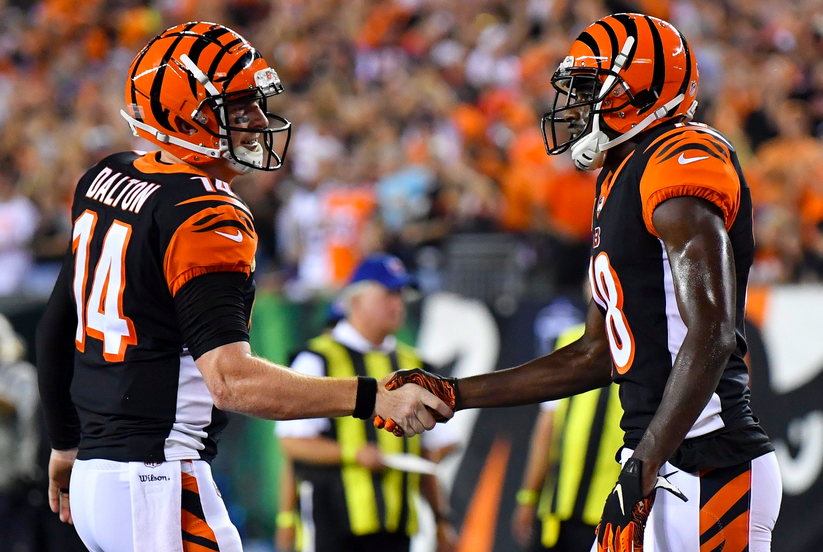 The Ravens lost on Thursday Night, 34-23 to the Cincinnati Bengals. RSR Staff react to the loss here…

The outcome of this one was decided by:

· A lack of pressure on Andy Dalton.

· Confusion in intermediate zones particularly with Mosley out.

· Shoddy play by the secondary.

· Coaching staff was out-schemed; Wink Martindale had no answer for A.J. Green in the slot.

· A sloppy offensive start with a couple of 3-and-outs and a pathetic interception.

· Bengals defense dominated first down in the first half forcing too many 2nd-and-longs.

The Bengals were ready for this game; the Ravens were not. This isn’t a surprise: Harbs’ teams are now 1-6 since the Super Bowl (0-4 since 2014) following a win of 24+ points. John knows how to coach his guys up, but he does NOT know how to prepare a team to build upon a big win. This is why they are never hosting games in January; it’s why they have had just one playoff bye week in his tenure. He also regularly gets outcoached by a guy/staff who has NEVER won a playoff game. Incredibly frustrating!

Marty Mornhinweg should be fired tonight. The Ravens were within striking distance all of the second half, but they were acting like they were down 30+ with under five minutes to play. Far too much Buck Allen, far too little Alex Collins.

It was great to see Flacco get some Andy Dalton type-luck with the big bomb in the first half to John Brown, then the touchdown later. In general though, he was off by just enough – and had very little protection – to turn the ball over a couple times, leading largely to this loss.

Road teams hardly ever win on Thursday night. The Ravens made a game of this, but were getting blown out early, which makes the fact that they couldn’t complete the comeback sting a bit more.

Still, it’ll be wise for all of us to just suck it up as an inevitable loss and move forward at 1-1. We’ll get that revenge on Cincy that we so crave when they come to our house.

For now, let’s be thankful for these 10 days of rest before Denver comes to M&T Bank Stadium. And let’s cross our fingers that C.J. Mosley is alright…

Give the Ravens some credit for hanging around in a game that looked like it was getting away. I can’t remember the last time this was the case but the major issues with this team are on defense, not offense.

If C.J. Mosley misses significant time it’s a huge loss. The coaching in this game was absolutely dreadful for the Ravens. Terrible schemes, going for it on 4th down when it wasn’t warranted, chasing points with two point conversions etc….this is basic stuff, not things NFL coaches should struggle with.

With a short week on the road I had this game circled as a loss, so that doesn’t bother me too much. What really bothered me was the defense – maybe they are not what we thought they were. Why in the world was Marlon Humphrey not shadowing A.J. Green the entire game? Yes, I know he was on him for the third TD, but in no way should Tavon Young be covering Green.

No pressure at all on Dalton behind an average at best offensive line is concerning. The offense started out sluggish but rebounded well, although they could not come up big in the clutch. Alex Collins still worries me as he has not looked like he did last year. I fully expect Buck Allen to become the starter in the next few weeks.

While the return game didn’t play a big role tonight, Janarian Grant had another fumble. You have to wonder if Tim White gets called up from the practice squad to handle those duties within the next 10 days.

Sigh… we knew it was coming, didn’t we?

We just can’t have nice things in Baltimore…

-Flacco wasn’t good. Don’t look at the yards or TDs. Look at the lack of pocket awareness, the heaved up pick early in the game to nobody in particular that led to the 1st Bengals TD, the final fumble to end the Ravens hopes, and even some of his completions deep were under-thrown and Smoke Brown saved the day.

-What front 7? 0 sacks, almost no pressure on Dalton, and the backs got to the 2nd level when they actually ran it.

– Green went off. I’ll eat crow. Whatever, I honestly don’t care, but I absolutely despise the Ravens letting Green essentially pick his matchups. You want undersized slot Tavon? Go ahead! How about Carr? Sure! It’s a foolish system and burns them every time.

-Just an overall lack of preparation by the coaches and players. They were outplayed and out-coached (the 4th down & 2 pt conversion decisions were awful) in every facet of the game.

-If THIS is the norm moving forward? You’re looking at 3/4 in the AFCN and a sub .500 record. Just ugly, ugly football tonight.

The Bengals’ talent and makeup continue to illuminate all the Ravens’ flaws. The inability to separate from coverage on 3rd down. The lack of space players specifically at 3rd down back (which is further amplified when playing from behind). Lack of range at safety. Coverage ability at linebacker. Couple all that with their much maligned offensive line holding up very well in pass pro and it was a recipe for victory for Cincy.

Marty Mornhinweg didn’t do anything to quiet his detractors in this one. I think I’ve tried to see the good in him more than most but he makes it difficult. He makes some painfully predictable calls and struggles to scheme players open on 3rd down. How he adjusts as the season progresses will ultimately determine Harbaugh’s fate.

This staff wont be afforded another offensive coordinator change.

LOL. I hated this game. The Ravens played like sh$t and didn’t get it together. Joe was pressured and flushed all night and the Bengals proved they’re for real until the playoffs.

But beyond that, Joe looked suspect and it’s more inevitable than ever that the Ravens develop some real offensive linemen. It’s true you learn more from a loss than a win.

Let’s recollect and come out and do this better next week. Jeez this was rough. I wasn’t impressed with anything about this team.  The Ravens proved a lot of doubters right tonight.

-Crushing game, but nothing hurts more than losing C.J. Mosley for 3-6 weeks with a supposed bone bruise. Joe Mixon had plenty of big gains through the gaps and Andy Dalton was attacking the middle of the field all game. That TD to Tyler Boyd was SO easy, just a simple run after catch with sloppy coverage from Patrick Onwausor. The run defense will not be the same without Mosley but hey, this is pretty good news considering he was riding a cart into the locker room with what looked like a torn ACL.

-A.J. Green continues to cause nightmares for the Ravens after scoring 3 TDs in the first half. He made a fool of nearly every CB on the roster but no one looked as awful as Tavon Young tonight. For a player who’s known for being aggressive and attacks the ball, he was soft most of the night and was picked on all game. Marlon Humphrey’s name wasn’t mentioned all too much, which is a positive. But it was still disappointing to see him allow a TD to Green after barely making an effort on the ball. I thought he could be one to end his reign of terror.

-Although the Ravens pass rush was fairly ineffective most of the game, I give more credit to Dalton’s quick passing game to get the ball out when the pocket collapsed. With that said, it still would have been nice to see at least one pass rusher shine tonight. Matthew Judon had the label of a rising star to start the season but he’s been pretty quiet these past two games. I think most fans, including me, underestimated this Bengals offensive line.

-This game started off sloppy but it was nice to see this offense rally back at halftime. Flacco was pretty off the mark this game and underthrew his receivers a handful of times. But he did make some pretty rewarding throws, including a CLUTCH contested catch by John Brown on 9 route along the sideline. Those were some mad hops. Crabtree also had a pretty toe tap catch along the sideline. I also thought Snead quietly had a pretty good game, as he’s showing he can be a dependable slot WR.

-There’s only one word that can be used to describe the performance of the offensive line tonight – garbage. Pass protection was terrible and it seemed like Flacco was forced to roll out pretty much every other pass. But I’m mostly disappointed with the run blocking, as the group has done a pretty poor job opening up holes these past two games. Ronnie Stanley was disappointing and looked like a turnstile at times. Matt Skura lacks the proper strength to be a capable starting C. James Hurst is not meant to play RT, plain and simple. I feel for Alex Collins, who really tried his hardest to make something from nothing. Nice to see him get active in the pass game with some impressive runs after the catch tonight.

It’s never as good or bad as it seems. That rings true for the Ravens these first two games. That first quarter was tough to watch as a Ravens fan after riding the high of last week’s win over the Bills.

The Bengals are always tough for the Ravens. After hearing Mosley’s injury is only a bone bruise that was a relief it wasn’t season-ending. His absence will be detrimental if he misses extended time. Kenny Young was one of the bright spots and having him along with Mosley will make a formidable duo.

John Brown looks like the poor man’s Antonio Brown I hoped he could be while Michael Crabtree was off of his game tonight. Flacco was up and down but the offense in general were not in sync.

This loss should serve as motivation while keeping the team humbled. The Ravens have been receiving a lot of national media hype but they seem to excel as underdogs.

This loss should slow down the hype train.