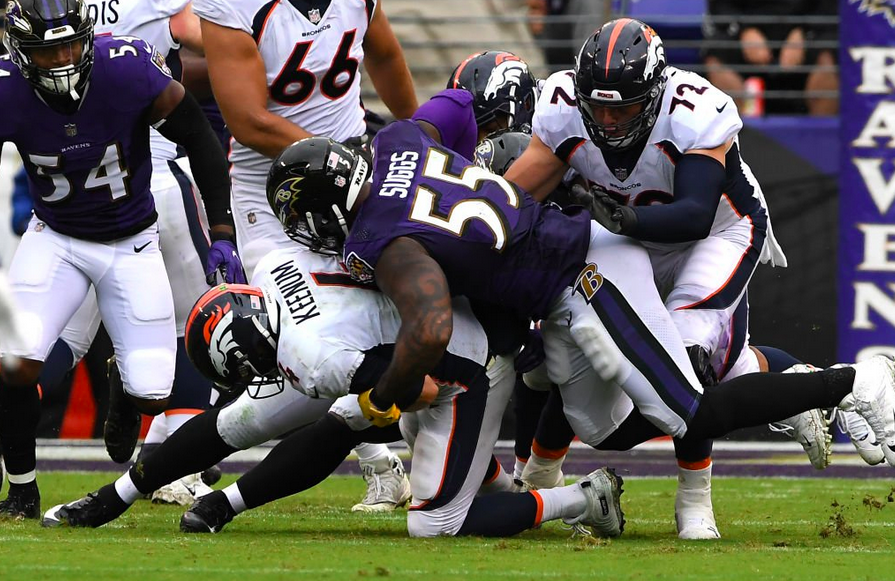 As of Friday in our Bold Predictions on RSR, I had picked the Ravens to win 24-14. Admittedly, as the weekend rolled on, my confidence wavered.

Then it wavered more after the opening 3 & out..

More after the blocked punt…

More after the 1-play touchdown…

But I’ll be damned if the Ravens didn’t NOT collapse under the pressure of an early hole, and come roaring back for the 27-14 victory! Truth be told, if the Ravens hadn’t had the two faux pas on special teams (blocked Koch punt, blocked Tucker field goal attempt)? We could be talking about a 30-7 drubbing, if not more!

But I digress… let’s take a look at those grades!

What more can you ask for from Joe Flacco this week? He completed 25 passes on 40 attempts for 277 yards and a touchdown (Buck Allen) while marching the field, and only surrendering a 3 & out twice on the day (the first drive and the second to last). Joe did take two sacks and was stripped once by Shane Ray (recovered by Alex Lewis), but he also stood tall in the pocket all day, and completed several clutch throws under duress. I like that version of Joe. The one devoid of turnovers and hitting his receivers in the numbers more often than not.

I also like Lamar on the sidelines, and only two plays for the rookie this week was ideal.

The pass pro was… like, above average but not great by any means. It was a crap shoot on how much time Flacco had in the pocket, but the left side of the line actually struggled pretty badly at times. Hell, Alex Lewis was the one beaten to lead to Flacco’s fumble (luckily Lewis recovered it). Ultimately, they gave Flacco just enough time to make some key throws in key situations so I won’t beat them up too bad.

The run blocking however was relatively bad. Again. The Ravens couldn’t run to the left… or up the gut… and rarely to the right. All in all, a 2.8 ypc net wasn’t good, and yes, that’s on the line much more than the backs.

The trio of Smokey Brown/Willie Snead/Michael Crabtree continues to impress. Crabtree (7/61) had some clutch 3rd down catches this week, as did Snead (3/39), while Smoke (5/86) reeled in some phenomenal deep passes from Flacco. Truth be told, he was one drop away from breaking that 100-yard mark.

But my man – Mark Andrews – was the most impressive to me this week. No he didn’t lead the team in yards or catches, but his athleticism – the hurdle on his first big catch, and working the tight seam and taking the big hit later in the game – is impressive. I’m excited for Hayden Hurst to make his debut, but Andrews has been a pleasant surprise thus far.

For the backs, they can only play as well as their line allows them to, and unfortunately, the Ravens OL isn’t having a great season in the run blocking world. That being said, Alex Collins ran one in early in the game, followed by a Buck Allen rushing touchdown, and another Allen touchdown reception from Flacco.

So take the 2.8 ypc… add in the Offensive Line struggles… but counter with the three touchdowns? That’s a solid B.

I’m not saying the Ravens got lucky that Phillip Lindsay is a moron and started throwing punches in a dogpile, but when the Broncos leading rusher only carries four times and averaged five ypc? It’s best he’s not on the field. Regardless, Royce Freeman didn’t do much worse than Lindsay (13 carries for 53 yards) and the Broncos offensive line was steadily able to manhandle the Ravens front for those extra push yards more often than not.

Health for the line will help moving forward, but definitely concerning in the meantime.

Kenny Young once again looked great, and his sideline to sideline speed is extremely impressive. Peanut Onwausor got beat a few times, but his clutch pick in the 4th quarter inside the Red Zone? That makes up for it, and then some. I did notice the swapping of Peanut and Albert McClellan a few times in the game, but both fared well in the absence of C.J. Mosley.

The outside unit came up with three sacks of Case Keenum (Terrell Suggs, Matt Judon, Za’Darius Smith), but struggled to set the edge at times, and watched Freeman turn what should’ve been a 2-3 yard gain into 10+ on multipe occassions.

Overall? The linebacker unit looked like they didn’t miss Mosley one bit…

TOTALLY kidding, they need him back, but they still did their job and played well.

Yes, the unit was able to hold Case Keenum to 192 yards passing and no touchdowns, but man… Brandon Carr had a bad game. Drawing a few DPI penalties, getting picked on by Keenum… not ideal, and it really just gets me hype to get Jimmy Smith back here very soon.

But the rest of the group on the field did well. Marlon Humphrey played stout (he appeared to be shadowing Emmanuel Sanders for a while), Tavon Young had a good rebound game, and the safeties did their jobs well.

I’m glad Eric Weddle was on the mic, and he is indeed serviceable, but it’s still not ideal.

You knew it was coming. Sam Koch‘s blocked punt to start the game was solely the fault of Tyus Bowser letting his assignment scoot right on by him, and you should never allow a defender to hurdle the line on a blocked field goal, which is exactly what happened to Morgan Cox on Tucker’s field goal attempt.

We should note that the play was actually illegal…

For anyone following along: We have confirmation of the missed call from Gene Steratore & a screenshot from the NFL rulebook.

I’ll give Tim White some credit in this game, as he fumbled approximately zero times – something Janarion Grant was never able to do in either of his games this season prior to the pink slip. Ultimately, I don’t expect we’ll see another week like this – two blocks just doesn’t happen to Jerry Rosburg’s unit – but ya gotta grade ’em based on the play today!

Marty called a good game to bring the Ravens back from an early hole, and Wink Martindale did as well. THE ONLY GRIPE I HAVE: for a tick in the second half, it seemed as if the Ravens offense let off the throttle at the exact same time the defense did the same, and the results could have been disastrous.

Somebody needs to stay aggressive!

It was a very good game by the Ravens, but definitely not one of their best. Cleaning up a few key mistakes in this game could go a long way, but I love what I saw versus Denver with the Steelers on the horizon!