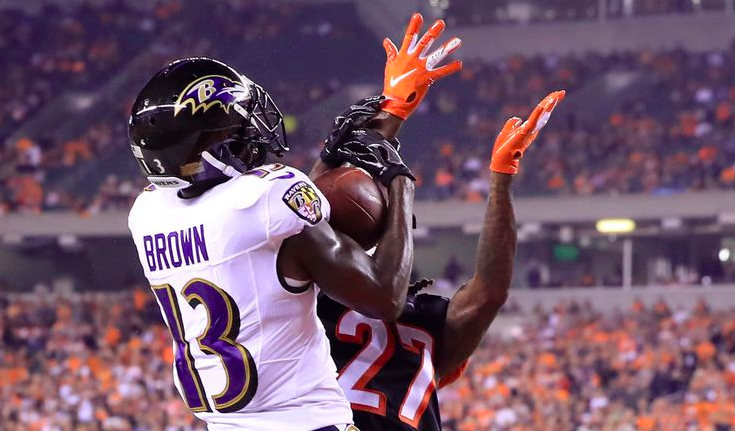 Before the season started, I wrote that John “Smokey” Brown could be the Ravens’ poor man’s Antonio Brown. After only three games we are starting to see that come to fruition. I’m not saying they are exactly the same type of player but there are plenty of similarities.

Browns’s cap number this year is very misleading. In 2019 it is $22.1 million, which just so happens to triple the year after Le’veon Bell is no longer eligible to be franchise tagged. Is that a coincidence? Of course not. The Steelers never planned on keeping Bell beyond 2018. Too bad for them that their grand plan isn’t working out as they had hoped this year.

Smokey and Antonio are both known as deep threats and they are equally as quick as they are fast. Where they differ from most NFL receivers that are 5’10” or under is they can go up and get the ball down the field above defenders and make tough catches.

As Ravens fans, we’ve unfortunately seen that far too often with Antonio and fortunately, we have already seen that with Smokey in just a few games. Their respective teams can rely upon both to move the chains in critical situations.

Much like the overdone “Is X QB Elite?,” the term “#1 receiver” is used too frequently these days.

If you ask ten people what constitutes a “number one WR,” you’ll get ten different answers.

In my definition, a number one receiver offers a plethora of high-level skills.

— Threat to score touchdowns from outside the Red Zone

— Reliable chain-mover, especially on third down

— The ability to haul in passes with defenders draped over him

You could add or take away from this list, but there are no exact qualifications that determine a “#1 receiver”.

In my opinion though, (and it’s not just me) John Brown is the Ravens #1 receiver. He also happens to have a great complement of other quality receivers that have helped him shine thus far.

Now comes the tricky part. Since he’s signed for just one season, Brown is betting on himself. So far, he looks to be winning. His win could be the Ravens’ loss, should they lose him to a team offering more money next season.

Should they try to extend him right now? Brown has been great, as we’ve discussed, but it’s only been four games, and Brown hasn’t played 16 games in a season since his rookie year in 2014.

There are valid points to be made for trying to sign him now, and for the alternative: waiting to see if he can indeed stay healthy for a full season, then trying to enter his bidding war next offseason.

As far as fan perception goes, the Ravens could be darned if they do and darned if they don’t. It’s a lot like the way fans will say John Harbaugh shouldn’t have gone for it on 4th and 1 after it’s unsuccessful – but they love it when it works.

As any sports fan knows by now, one-year or expiring contracts can be very motivating to a player looking to prove his worth. How often do players fail to live up to their “contract year” production?

If Ozzie Newsome decides it’s best to lock Brown up now, before his price goes up they might not get the hungry & motivated player they are seeing now.

How motivated did Jeremy Maclin look last year after getting his three-year deal?

If they wait, Smokey may price himself out of Baltimore, which, sadly, Ravens fans have become accustomed to.

The perfect scenario would be to lock him up now, and for him to continue to produce at this level.

The Buffalo Bills offered Brown a three-year deal for $5 million a year that he refused to come to Baltimore.

He wanted a one-year deal to prove his worth. So far, he’s done just that.

I don’t claim to have the right answer here. I just know that I’m glad Smokey is a Raven right now.