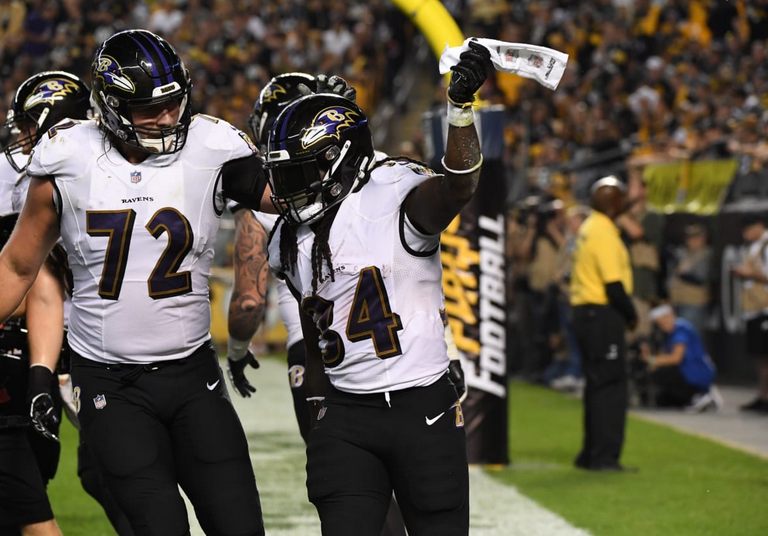 I’m still basking in the victory this morning after a Ravens 26-14 victory over the Steelers late last night. That win felt really good, and not only did it help boost the locker room up, but I believe it helped boost morale in Baltimore. Like how Ray Lewis helped lower crime rates? JUST LIKE THAT. So how good was it?

-Shut out Yinz offense in the 2nd half

Just an all around great game by the Ravens, and really, a few mistakes away from what could have been a 35+ point game for Baltimore.

Alright, let’s do the grade thing this morning!

JOE FLACCO IS ELITE. Okay, maybe not ‘elite’ but he was damn fine last night, going 28 of 42 for 363 yards and a pair of touchdowns. Joe did pretty much everything you could ask of him, and corrected many of the mistakes that I’ve personally harped on for some time – he was hitting his crossing routes in stride and not throwing behind the receiver, he had timing on his deep balls to John Brown, and he focused on targeting beyond the markers on 3rd, hitting on many key throws. I can’t recall a single ‘bad’ throw by Joe (aside from the miss to Crab that may have gone for a TD, but that may have been a communication issue).

Lamar Jackson did some nice things too, carrying the ball four times for 17 yards, and yeah, I could put him under running backs at this juncture since he hasn’t thrown a pass since Week 1, but I’m not. Because I said so.

If I had to break this down into pass pro vs run blocking, it would be an A and C, respectively. Flacco had an extremely clean pocket all game, sans ‘two sacks’ but one was really Joe trying to take off upfield when the coverage locked down, and he was shoestring tackled. I have been so pleasantly surprised with James Hurst at Right Tackle, but should I be? This is what the Ravens do: they develop OL over time and always surprise us. There was a time guys like Ryan Jensen (6th) or Rick Wagner (5th) were considered fringe guys that turned into top paid lineman. Not saying Hurst is there, but he’s looked damn fine thus far.

The run blocking remains an issue, however. Alex Lewis is still the weak link of the unit, and PFF has the Ravens graded as their 2nd worst run blocking team this season (49.6) to only the Bills (45.0). Not a good look. 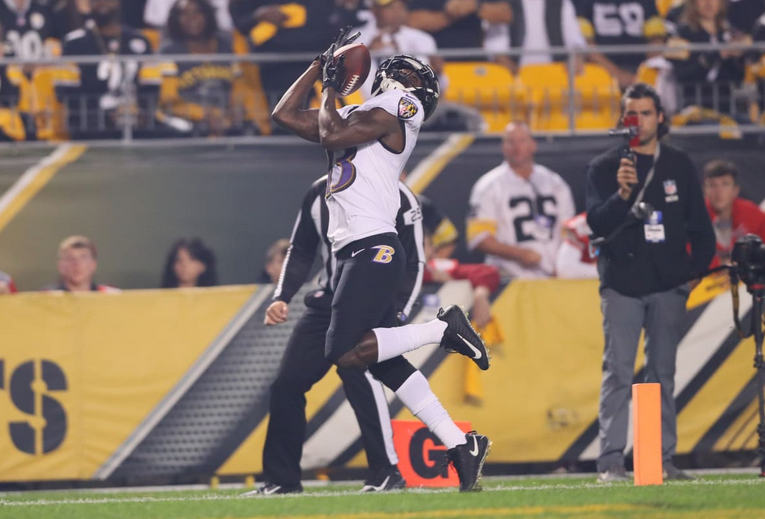 I’m nitpicking here so deal with it. Overall, the unit did well. Smoke Brown with 116 yards on three catches, and Willie Snead with six receptions for 56 yards were the cream of the crop. Tim White got into the action as well with a key 3rd down conversion, and Chris Moore came up huge with a 4th & 2 carry for a clutch 1st down, and added a big catch right after the Tony Jefferson reversed-TD fumble recovery for good measure.

Let’s throw in the Tight Ends now: the trio racked up 99 yards on 10 catches, and the blocking – specifically Maxx Williams once again – was great.

So why the ‘minus?’ Michael Crabtree. It wasn’t just his huge drive-killing drop. It was three receptions on eight targets, and many of which he should’ve caught, including one that would have gone for an easy first down in the second half when the game was still very much hanging in the balance. Crab is the guy we all thought would be a big weapon for Joe, but he caught Perrimanitis. Gotta fix it bro.

They just can’t make it happen. I honestly blame the offensive line for a lot of those woes, but it’s beyond frustrating to watch them try to carry the ball whatsoever. Alex Collins (11-42-0) and Buck Allen (10-30-0) did okay I guess, but like Harbaugh said last week, they just need to break off a big run. They can’t. Both had 11-yard long runs on the day, and while it’s nice, we need more from them than a single run of slightly more than 10 yards, and otherwise a 2.8-3.0 ypc. UGLY.

I’d also like to take a quick second to point out that Collins once again fumbled, and as always, he was carrying the ball with one arm into the jaws of a defense. ON THE GOALLINE. This simply cannot keep happening or you’ll see DeLance Turner start to see more touches out of the backfield. And once he does? Better watch your back AC…

Oh wait, Collins had a TD too on a four-yard reception. Too bad, still a C+ because of the critical, momentum-swinging fumble.

From a run-stopping standpoint, they did well. James Conner took most of his shots through the jaws of the Ravens D, and amassed a whopping 19 yards on nine carries. When you hold the opponent’s starting running back to less yards rushing (19) than receiving (25), that’s a solid day up front.

My big ‘wow’ on the line last night had to be Brandon Williams though. Up 14-0, the Ravens had the Steelers back inside their own 15, and Williams just bullied his way from center to left to get into Ben’s passing lane, only to swat the pass attempt up in the air, and almost came down with it inside the 5. We constantly forget how good Williams is because he’s not a ‘hit the QB’ defender. But he good.

One sack of Big Ben on the night, and it came late in the game, courtesy of Timmy Williams, but man was that a sack in a crucial moment! So kind of a mixed bag of ‘great sack’ but also ‘about damn time.’ While Terrell Suggs wasn’t able to get to his buddy Ben, he did have two tackles for losses, pressure a few times in this game forcing quick throws, played decent in coverage on a few snaps (covering JuJu Smith-Schuster and Conner), and damn near picked off Ben in the 3rd quarter: as Ben went to throw a quick out, Suggs read the play well, and altered the pass, rendering the play DOA and forcing a punt.

The inside unit was a mixed bag. We won’t talk about Kenny Young much on the stat sheets, simply because you didn’t hear his name much. That’s not a bad thing! But worth noting: he dropped down to 24 total defensive snaps. Given the game plan (Anthony Levine saw a ton of time in Dime), it makes sense, just sucks to see after he’s played so well in C.J. Mosley‘s absence. Speaking of Mosley, he struggled badly in the first half in coverage, steadily getting beat like a drum by the tight ends and jumping in on play action. He recovered well in the second half, though, and played all 63 defensive snaps on the night coming off an injury. So yanno. Good on ya C.J.!

I’ll start with the bad to get it out of the way: Marlon Humphrey and Tony Jefferson got trucked by Vance McDonald, who took the two defenders on a five-yard ride down the field after a first down catch. Smith-Schuster and Antonio Brown both had big gains in the first half (38 vs. Carr, and a 28-yard TD vs. Humphrey, respectively).

Otherwise, you’re talking about a unit that shutdown the wideouts in the second half for the most part, and contained two of the biggest receiving threats they’ve faced this year. Yeah, I know Humphrey gave up a touchdown to Brown, but he was on AB like white on rice. It was fantastic coverage, but an even better pass, and a phenomenal adjustment mid-air by AB to rope it in.

Carr, for his part, had an amazing break-up of a would-be TD pass to Schuster. He played the ball perfectly, punching it away as soon as he saw it in the WR’s hands. That forced a Pittsburgh FG instead. Big.

The Safeties had themselves a game as well, with both Eric Weddle and TJ playing the run well, and of course, Weddle with a HUGE stick of Conner flipping him over his back, while TJ had the strip of McDonald that gave the Ravens the ball with great field position in the 1st quarter.

Tucker went 4-for-4 in Pittsburgh, which he pretty much owns now.

Sam Koch had some monster punts.

And hey! No fumbles on the returns by Tim White, and no blocked punts or kicks (thanks in part to a hold that was flagged, but hey, it beats a block)! That alone deserves an A!

Rarely do I gush about the coaching, but we’ll make an exception this week, as both Marty Mornihnweg and Wink Martindale called phenomenal games. Marty’s offense came out of the gates on fire, and honestly? Had it not been for self-inflicted wounds (penalties and the Collins fumble) I’m not sure Pittsburgh could’ve stopped them on any drive. Wink’s defense started hot, began to struggle in the 2nd quarter, but regrouped phenomenally in the 2nd half by completely eliminating the Steelers tight ends, keeping the running game on lockdown, and not biting on play-action the way they did early.

The Ravens marched into Pittsburgh, held a top-5 offense to 14 points while shutting them out the entire second half (a growing trend for the Ravens), put together six scoring drives of their own (which should’ve been eight sans mistakes), and literally owned this game in every aspect from start to finish.

I mentioned last week on our Neutral Zone Infraction podcast (@NZIPodcast – no shame in my name drop game) that I believe the 2018 Ravens are the most well-rounded team in the NFL right now, aside from maybe the Rams. This game is a testament to that sentiment, and honestly? I think they could be the most balanced team in Ravens history – yes, more balanced than the 2000 Super Bowl team (that didn’t have an offense), and more balanced than the 2012 Super Bowl team (that lacked much of a defense). That’s not saying they’re a shoe-in for another Super Bowl, but it undoubtedly makes them a big time threat to make a push.

On to the Browns!