This game has shootout written all over it. The Steelers defense is #Bad, the Falcons defense is ravaged by injury and both offenses are top 10 in pace this season. After a forgettable Week 1, Ryan has accounted for 12 touchdowns over the last three games with just one turnover. This is a game you want to invest in and Ryan is tops on that list.

Gordon is in a gorgeous spot for Week 5, going up against an Oakland defense that is giving up 5.6 yards per carry this season. A surprisingly heavy passing game role and multiple red zone carries in each of the last three weeks make Gordon arguably the top RB option this week.

The one thing the Saints have done well this year defensively is stop the run. Traveling to the Superdome usually requires an increase in pass attempts. Those two factors don’t bode well for Adrian Peterson’s outlook but work wonders for Chris Thompson. Look for him to be a lot closer to the 10.5 targets he averaged in Weeks 1 and 2 then the two targets he received in Week 3.

Julio’s lack of red zone targets in this three-game stretch is a tad bit concerning for his overall ceiling but he leads the NFL in air yards and is facing a defense that is giving up 8.1 yards per pass attempt (7th worst in the NFL). With a robust 125 receiving yards per game, he should be scoring TD by accident at this point. 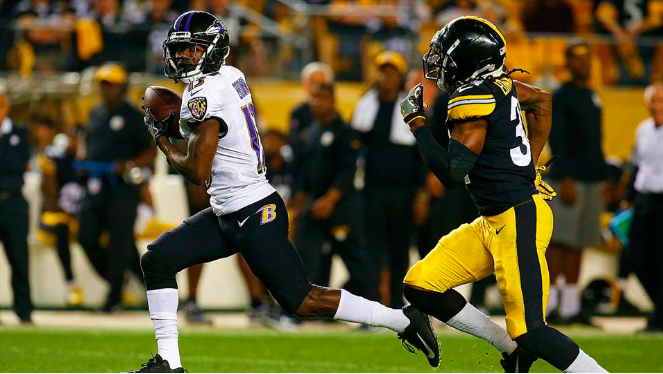 The Browns have been a formidable defense for most of this early season but got hammered to the tune of 437 yards by Derek Carr last week. Brown has been a revelation for the Ravens, emerging as the team’s #1 WR. He enters the week with the 3rd most air yards in all of football. Look for a couple shot plays baked into every week’s game plan for “Smoke” going forward.

Despite Kenny Golladay’s emergence, Jones has managed to maintain a healthy number of targets (29) and air yards (448). Then there is absolute evisceration of the Packers as a member of the Lions (22 catches for 469 yards and five touchdowns in four games). Green Bay has had a solid pass defense so far this season but they’re also facing multiple injuries at cornerback. Play Jones with confidence, especially at his price.

The Giants have actually defended the tight end well this season but haven’t faced one to write home about yet (Jaguars, Cowboys, Texans, Saints). Thomas’ targets grew each week and he took sole control of tight end duties in Week 3, lining up for 78% of the snaps. Wide receiver target leader Devin Funchess will face a tough matchup in Janoris Jenkins this week which could funnel a couple more targets in Thomas’ direction. Six to eight targets should equal dividends at his minimal price tag.

Jones looks poised to take the lead at running back in Green Bay. He led the group in touches last week and most importantly received two red zone carries, one he converted for a three-yard touchdown. The fact that all three  running backs had 20 or more snaps is concerning but with all the injuries the Packers are facing at WR this week we could see Ty Montgomery’s snaps reallocated to the slot. Jones has thoroughly outperformed the other two since his Week 3 debut and now faces a Detroit team giving up 5.3 yards per carry, 3rd worst in the league.

This is all about the Cardinals offensive offense. They forgot how to use David Johnson, Larry Fitzgerald is hurt and nobody on the team has eclipsed 100 air yards in a game this season. They rank near the bottom in every major offensive category, including a paltry 9.3 points per game. Need more convincing?