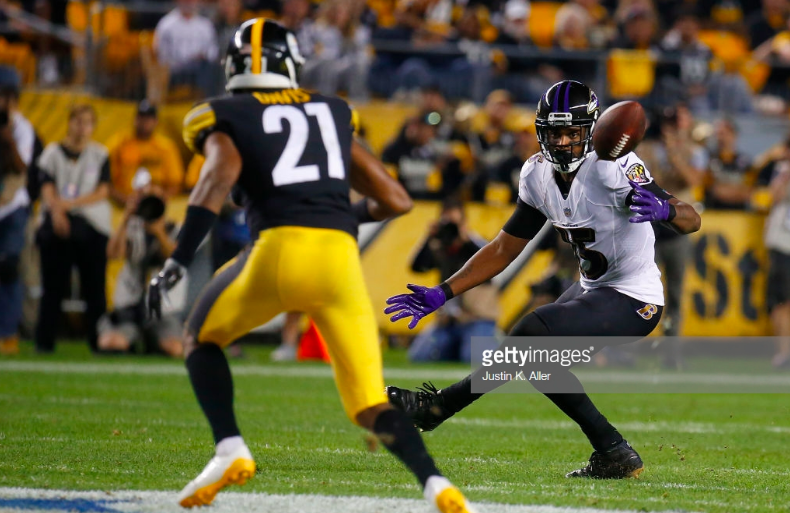 What a week it has been. I’ve thoroughly enjoyed trolling Steelers fans, no matter where I’ve seen them. I’ve walked around proudly, in my Ravens gear, watching them put their heads down as I pass.

But, it is time to move on, as the Ravens travel to Cleveland for their final divisional road game of the season. It feels weird to say, since we, as a fanbase, are used to having late-season road games against divisional opponents almost every year.

With a new week, comes a new Chicken Box, a compilation of thoughts and opinions from Baltimore, to around the league – and sometimes, not NFL-related at all.

With ‘Steelers Week’ coming to a close, so starts ‘Jimmy Smith and Hayden Hurst Week.’ The former is a star cornerback coming back off of a four-game suspension. The latter is the Ravens’ first-round pick (youse forgot they had two, huh?), who looked very promising in the preseason, and adds another weapon to the already deep arsenal under Joe Flacco’s command.

When Smith is healthy…or not suspended…he is a top CB in the league. Top 10, at the least. So that means that he should automatically be starting once he’s ready, yes?

Marlon Humphrey is blossoming into a top corner. Tavon Young is not without his struggles, but is a good slot option. And Brandon Carr is playing some of the best football of his career through these last four games.

This means that the Ravens have four starting-caliber corners that are healthy, and can rotate them in and out, based on need, to keep everybody rested, and hopefully healthy. Add in promising rookie Anthony Averett, who is currently dealing with a hamstring, and Maurice Canady, and needing to split cornerback snaps is a very good problem to have. 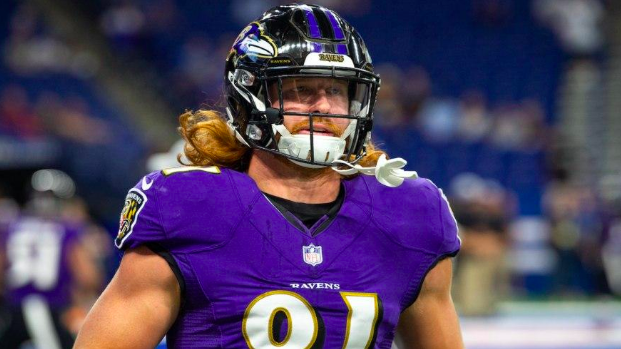 Hayden Hurst was the consensus No. 1 tight end in the draft for a good chunk of time during the pre-draft process. He then fluctuated, thanks to the athletic ability of Mike Gesicki, and the Zach Ertz-like traits of Dallas Goedert. He still went off the board first at the position, to Baltimore. He immediately made an impression in OTAs, as well as training camp, and then brought the same energy to preseason.

Unfortunately, a stress fracture in his foot has kept him out of the regular season so far, which is not a good problem to have. The good problem to have is that the trio of Nick Boyle, Maxx Williams, and Mark Andrews have been far better than expected. Eleven different players have caught passes from Flacco this season, and I expect that number to move up by one this Sunday.

The question is, do the Ravens activate all four TEs, moving forward? Or does one get the short end of the stick? 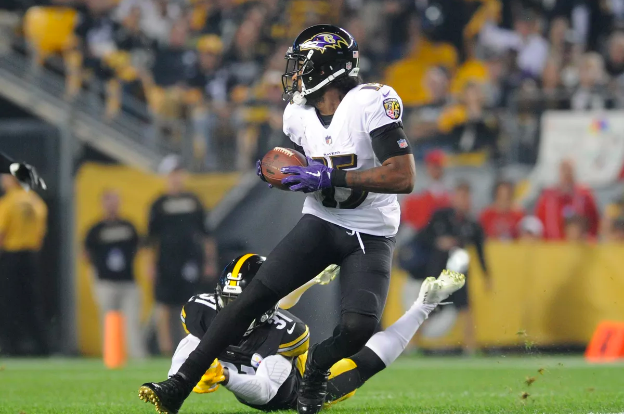 …has seen more dropped balls than puberty. He currently leads the league in drops, and Sunday Night didn’t do anything to quiet the rumblings within the fanbase.

For all the talk of Michael Crabtree being a big target who can make the contested catches, he has six drops on 34 targets, and some of those have come on passes which would have been crucial conversions, or long touchdowns.

Yes, he has the toe-tap touchdown. Yes, he’s made some good catches. Yes, he’s a solid replacement for what was a dismal No. 1 receiver in 2017. But the drops are not acceptable.

I’ve heard an argument that it was a “new offense,” and he “needed time to adjust.” I would agree, but then we would both be wrong. Mark Andrews. Willie Snead IV. John Brown. These guys are all new to the offense, and are producing very well, in different aspects.

Crabtree has had bouts of drops through his entire career, but never six through the first four games. He needs to focus, and stop dropping passes, or the Ravens may as well replace him with Chris Moore, and help the growth of the latter.

If this continues, I don’t see Crabtree making it past the first year of his three-year contract.

Is it too early for draft prospects? 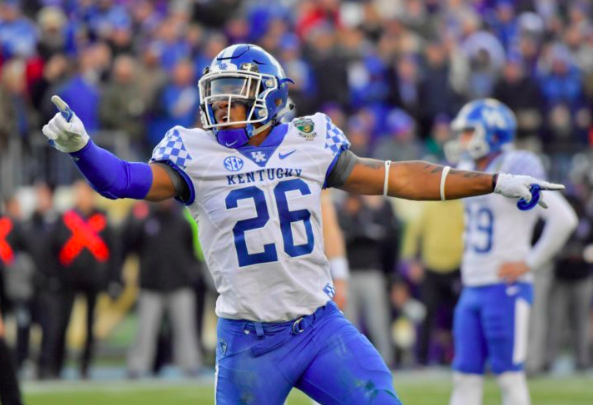 Because I really like the idea of Benny Snell, running back out of the University of Kentucky, in purple and black. 3,088 yards on 563 carries, good enough for a 5.5YPC average, with 40 touchdowns to boot. (He also has a tackle and no fumbles.)

He runs with power and vision, and leads college football in yards after contact. He’s good at breaking tackles, and better at avoiding them completely.

Combine him with Alex Collins and Javorius Allen, and you have the makings of one of the best running back groups in the entire league. Unless his draft stock rockets up, the third round seems like a perfect place for one of the Top 5 running back prospects in the 2019 NFL Draft. 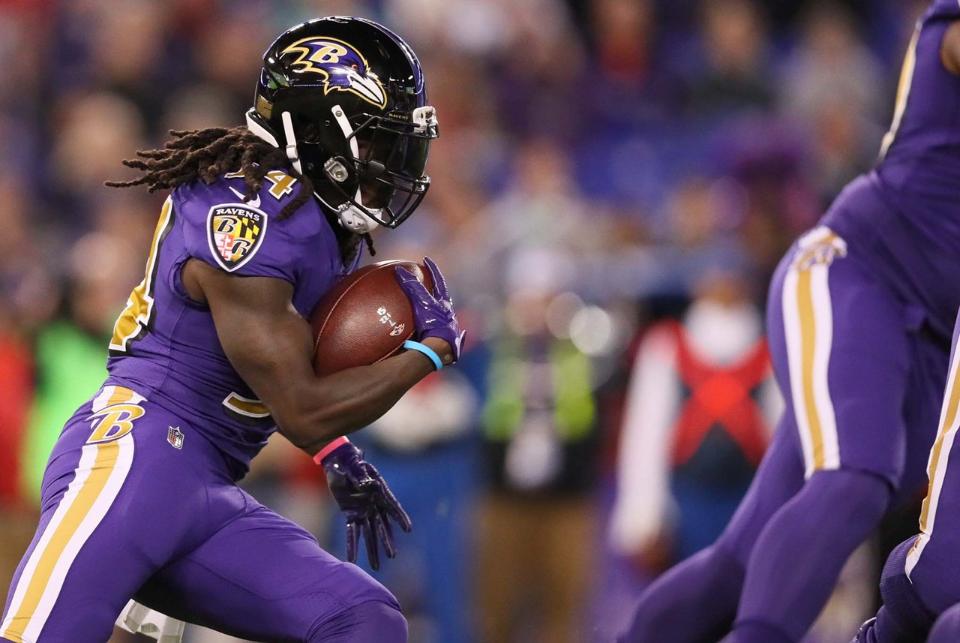 Not great. That’s what I think every time I read my pinned tweet.

I'm going to pin this.

Last night, on @PurpleReignShow, while talking with @iHateJJRedick, @realLoganLevy, and @TheMattWise, I said that there isn't a 2018 RB prospect that I would put over Alex Collins.

I've slept since then. And I still stand by it.

The run game hasn’t been great this season, and most of that is the fault of the 31st-ranked run blocking offensive line. Behind that line, the run game is averaging a paltry 3.1YPC.

But my problem is with Collins. He’s put the ball on the ground twice in four games, once in a scoring situation that would’ve put the Ravens up over the Steelers by three scores early on. I’m starting to lose faith in my original take.

Now, all this being said, Collins can fix this. He did it last season, when he had three fumbles through the first half of the season, and just one in the final half. He also wasn’t even near the top in fumbles – he had four. The league leader had eight. Even Le’Veon Bell had three, and he is considered one of the best backs in the league.

I’m not giving up on AC just yet.

Numbers you should know

It’s not every week, or even every season, that Ravens fans get to talk about how well the Ravens are doing, especially the offense. This year, at the quarter mark of the season, they do. Here’s some numbers to help you out.

1. The Ravens hold the second-highest point differential in the league, at +58.

2. The Ravens currently have a 60.7% chance of winning the division, per ESPN’s FPI rankings.

4. The Ravens hold an average rank of 6th on various power rankings around the league.

5. Joe Flacco is on pace for his best statistical season by far. At this pace, he will complete 65% of his passes for 5,008 yards, and have 32 touchdowns against just eight interceptions.

7. The Ravens, assuming they win on Sunday, would be 4-1. They have never missed the playoffs after starting 4-1.

8. Michael Crabtree is on pace for 24 drops this season.

9. Matthew Judon is on pace for 20 penalties.

10. Lamar Jackson is on pace for zero starts, and four completions.

If these numbers keep up, even remotely close to where they are now, this Ravens offense will go down as the best in franchise history.

And with that, it is Browns week. Time to walk into the Dawg Pound and kick some puppies. Be sure to listen to this week’s (and every week’s) episode of Neutral Zone Infraction, Baltimore’s newest Ravens podcast, hosted by yours truly.