The Ravens have made many a Browns’ first-round QB look silly over the years. The likes of Colt McCoy and Brandon Weeden come immediately to mind.

Can they do the same to Baker Mayfield?

It’s quite a small sample size, but so far, Baker looks to be head and shoulders above those other guys.

The Ravens, however, have a dominant secondary that is getting perhaps its most talented player back this week. It should be quite an interesting battle on Sunday.

Let’s take a look at all the stats, quotes, notes, and more to get you ready for Ravens-Browns. 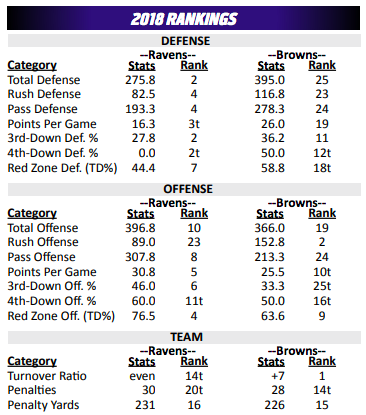 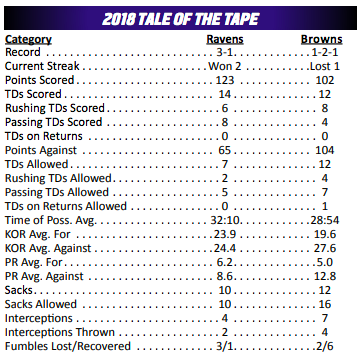 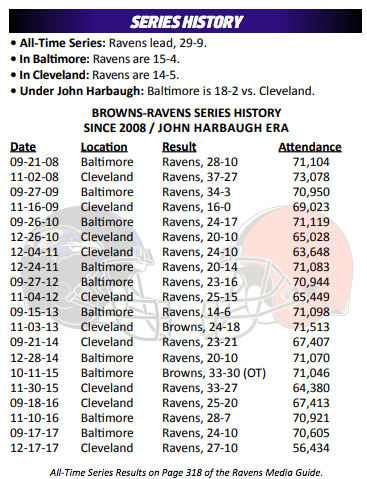 “The Ravens’ receiving corps is experiencing a Great Awakening with Michael Crabtree and John Brown. It has made Baltimore’s offense incredibly fun to watch, when combined with the running of Alex Collins (and potential of tight end Mark Andrews). The Ravens are a team that cannot be overlooked on a weekly basis. They’re also a resilient bunch.”

“Heinz Field is, historically, a bit of a Bermuda Triangle for kickers. Except for one. Tucker was four-for-four in field goals Sunday night in the 26-14 victory over the Steelers. In fact, Tucker was the only person to score in the second half in this game. He hit on field goals of 47, 49, 28 and 31 yards after halftime. Now he has a streak of 17 straight at Heinz Field, and the most accurate field goal kicker of all time stretched his lead over Dan Bailey to almost two full percentage points. Tucker, number one, has made 90.2 percent of his kicks. Bailey, number two, is at 88.3 percent. That seems like a wow to me.”

QB Joe Flacco on the Ravens’ variety of offensive players:

“We have a lot of versatility at [the tight end] position, and we have a lot of versatility at our wide receiver group. I think our running backs do a great job of rotating in there, and they all do their things that they do really well. It is exciting that we have that. And our job is to go out there and continue to execute the way we’ve been executing. I think Marty [Mornhinweg] has been utilizing everybody, and guys have been executing pretty damn good. I think the line, those guys are really the key. They are the solid five guys that are out there every single play, and they have to play a physical game every single week. Keeping those guys healthy is a big deal, because those guys are playing awesome right now.”

“He can do it all. He might be small in stature, but he’s strong, he’s physical, he can make every catch. That’s the one thing about ‘Smoke,’ he’s one heck of a competitor. … I’m so happy for him, because he’s been through so much with all the diagnoses and things that have gone on with him the last two years. He was a superstar waiting to happen, and I’m just so happy, because he such a great young man. I couldn’t wish it for anyone else any more than John Brown. ‘Smoke’ is one of my favorite players.”

“He’s one of the best linebackers in the game. In terms of playmaking, obviously, when he’s your signal caller, getting guys set up, his experience – he’s just a phenomenal football player, maybe even better guy. I just think that when he’s out there, he’s a difference-maker.”

GETTING TO KNOW YOU ~ Q&A with Kenny Young

“My family. It’s personal, so it’s like every person in my family inspires me in different ways. I want to be a perfect example to my little sister [14] as the only big brother. My father passed away, but his spirit lives on inside of me, continuing that legacy of us both being Kenneths. My mom – my love side, my caring side, my treating people right and family coming together comes from my mom’s side. With me having a family one day, I aspire to do it at least the way my mom did it, as far as her love, smiling, clowning around, just her personality. Her personality drives me.”

You were on the debate team at UCLA. How did that come about?

“I was referred by a law professor. He went to UCLA, and he was on the debate team when he was younger. I had won a class debate that was nowhere near close to a topic that I like to talk about. I was ‘for’ the argument, and I emailed him right away and said, ‘I really don’t believe in this. I don’t think I ever will.’ And he said, ‘Just give it some consideration. It’s a debate.’ He opened my mind up to a little bit of a different [idea], because it wasn’t about if you were really for it or not, it was just, ‘What were your points towards it?’ I wound up crushing the debate. He was like, I want to invite you to the debate team. I tried out, and he said, ‘I think it would be good for you. You will be doing media if you have a prosperous career, so I think it will help benefit you.’ He said, ‘I bet you’ll be a sportscaster or commentator once you get done, because you can speak well.’ That’s what it was. I tried it out, and I did pretty well at it.”

What’s one of the most memorable debates you’ve had?

“It’s more interesting whenever you don’t have much information about the topic, and you have a small amount of time to find information. You’re finding facts and a way to voice that towards [your opponents]. Your object is to have stronger points than them. That’s challenging but interesting, because it’s like, ‘How can I find something that I don’t know about, but find great points to overcome what their point is? Who has stronger structure, a stronger foundation? It gets pretty interesting! You start yelling at each other, and it’s fun.”

What’s your proudest accomplishment outside of football?

“Winning the Academic & Student Services Success Award in college. It’s for excelling well in the community, in your sport and in academics out of all of the athletes, boys and girls.”

You majored in sociology. What was a particularly interesting class or assignment you had?

“I had a paper published! It was a ‘Grammar B’ essay, and [UCLA] still uses it to this day. There were a couple, actually. A ‘Grammar B’ essay is basically something you write that’s not in the form of an essay. It relates a thing to a concept. I wrote about an hourglass, and I wrote all the things I’m waiting for [up top], because when you think about it, it’s an hourglass. The theme was time. It’s waiting for time. At the bottom it says, ‘I’m glad that you didn’t get caught up in certain traps and certain stereotypes, whether that be because of a person, where you come from, where your family struggles or where you do well. They published it at UCLA as an example. It’s a legit published essay.”

A lot of people say, “Know your why.” What is yours?

“To shine my light as inspiration to the witness, the motives of my greatness.”

Ravens GM/EVP and Hall of Fame TE Ozzie Newsome played 13 seasons in Cleveland. After his playing career, he then held positions as a scout, assistant to the head coach/offense/pro personnel, and director of pro personnel before moving to Baltimore as VP of player personnel in 1996.

Baltimore special teams coordinator/associate head coach Jerry Rosburg was the ST coordinator for the Browns from 2001-06, while Ravens defensive line coach Joe Cullen held the same title in Cleveland for one season (2013).

The Ravens’ staff is comprised of many people who were invited to join the franchise when it moved from Cleveland: SVP of football administration Pat Moriarty, EVP of public & community relations Kevin Byrne, VP of football video operations Jon Dubé, SVP of operations Bob Eller and VP of IT Bill Jankowski.

Ravens senior personnel assistant George Kokinis was the Browns’ GM in 2009. Kokinis began his career with Cleveland as an operations intern (1991) and then as a scout (1992-95).

Baltimore director of pro personnel Vincent Newsome played two seasons (1991-92) for the Browns before becoming a special assignment scout for the team from 1993-95.

Baltimore secondary coach Chris Hewitt was a Browns intern in 2001 through the NFL’s Minority Coaching Fellowship.

Ravens east area scout Bobby Vega spent 2005-18 within the Browns’ scouting department, starting as a scouting assistant and working his way up to director.

Browns QB Tyrod Taylor was drafted by the Ravens in the sixth round in 2011 and spent four years with the team. DT Carl Daivs was a Ravens’ third-round pick in 2015 and played for the team through the ‘18 training camp. DL Trevon Coley spent the 2016 training camp with Baltimore.

Like they’re about to witness another loss. I can respect their pre-game game.

They’ll be amped Sunday. Here’s to the Purple Birds shutting them up yet again.