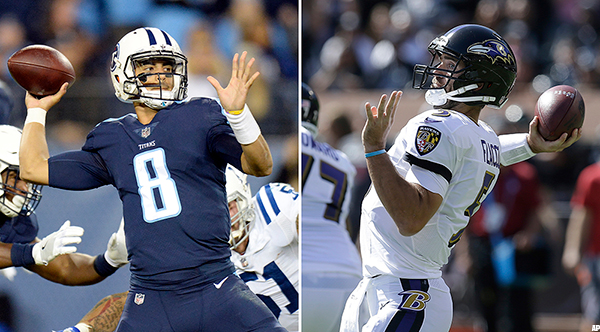 Will the Ravens bounce back against the Titans on Sunday? RSR Staff predict what we’ll see…

Joe Flacco has played in Nashville three times as a professional and during those games the Ravens have averaged a whopping 15 points per game. Don’t expect this Sunday to be much different! Dean Pees knows Flacco well and while there’s a chance that Joe can rally his team late in a game when Pees goes into his prototypical retreat mode (I’ve often wondered if in another life he was a General in the French Army), I think Pees is actually smarter than Joe and Marty Mornhinweg.

So, with that said, let the sobering boldness begin.

· Flacco’s career passer rating in Nashville is 67.3. He’ll fall right in line with that throwing for 274 yards (mostly in catch up mode when Dean backs up the troops), but he’ll hit pay dirt just once and a blue jersey twice. Oh, and this is the game when checkdown Joe makes a comeback.

· Speaking of comebacks, Michael Crabtree will post 7 catches for 95 yards and the Ravens’ only touchdown. His only drop will be an F-bomb after he scores.

· The Ravens running game is what it is and it ain’t good. Lamar Jackson will have the biggest gain with a 21-yard scamper in the first half.

· The Ravens will outgain the Titans 353 net yards to 325 but they’ll lose the turnover battle by a 3:1 margin and that will be the difference in the game.

— The Ravens played their so-called “trap game” in Cleveland. They cannot afford to slip up against the Titans and fall to 3-3.

— The Ravens broke an NFL record by starting the season 13 for 13 in converting red zone trips into touchdowns. Teams have made the necessary adjustments and the Ravens have not scored a touchdown in their last seven trips inside the red zone. Expect that trend to continue. Titans DC Dean Pees knows the tendencies of the Baltimore offense and will adapt the proper schemes.

— The Ravens will stick to the ground attack against a Titans defense that is ranked 26th against the run. Alex Collins and Buck Allen will combine for more than 100 yards. That said, neither player invokes any type of fear in an opponent.

— The Ravens will lock down Marcus Mariota and that will pave the way for a victory. 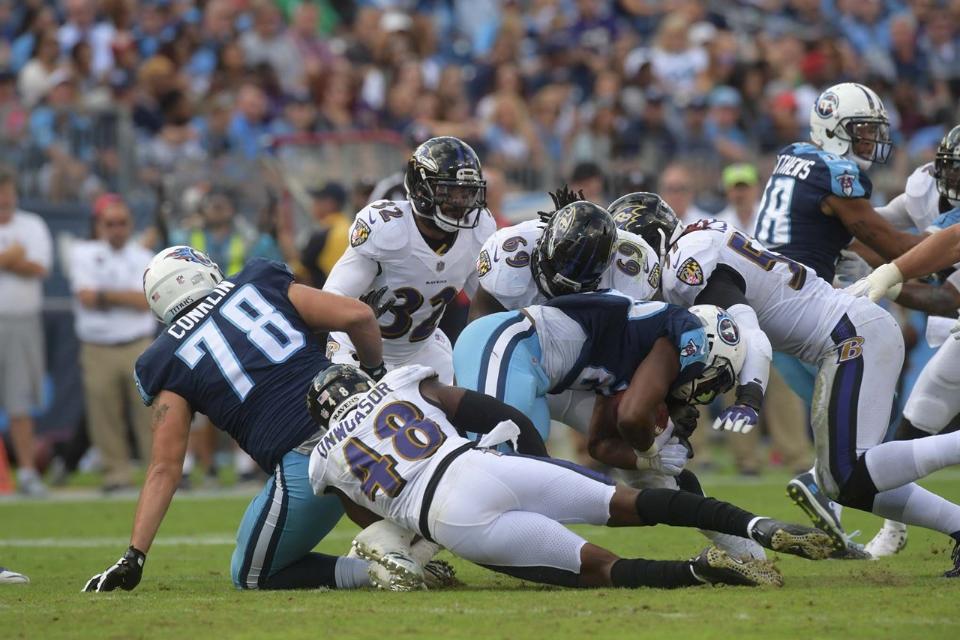 The Ravens’ old friend, rain, makes another visit in Nashville.

— The Ravens have some modest success running the ball, but Flacco still drops back at least 45 times.

— There will be an emergent with 80+ receiving yards from Willie Snead, Mark Andrews, and Hayden Hurst and they’ll total at least 140 as a group.

— The Ravens offensive line fails to top 50% ATS, but Flacco delivers the ball quickly to offset.

— Mornhinweg delivers substantial scheme elements aimed at stopping Jurrell Casey, but he still gets a sack and at least 4 total pressures from the inside.

— The Ravens pass rush adds some numbers and deception to frustrate Mariota and an injury-plagued line.

— Za’Darius Smith has 2+ QHs. Terrell Suggs has at least 5 pressure events and draws a holding flag. Eric Weddle has an interception among 3 takeaways for the defense.

The Ravens win a game with significant playoff implications 24-13 and keep their streak of not allowing a 2nd half TD.

That low-scoring affair in Cleveland last Sunday that resembled the win against the Chiefs six years ago. Funnily enough, that game was also on October 7th.

Last week’s game was a fluke, and I feel that the Ravens will be trying to prove a point against former Ravens DC Dean Pees, who is now in the same position for Tennessee.

Tennessee, who is ranked 29th in total offense, has had to rely on Marcus Mariota, who began the season with a pinched nerve in his elbow, giving way to journeyman QB Blaine Gabbert. RBs Derrick Henry and Dion Lewis have left much to be desired thus far, combining for only 386 yards on the ground. Mariota has 122 rush yards himself and has been the adhesive for their offense.

The defense on the other hand is 4th in points and 7th in total yards. Dean Pees has a durable defensive unit, but against top tier opponents it happens to fall apart. That’s the Ravens – if they can regain the potent form they had against other opponents earlier this season.

John Brown and Michael Crabtree will be the difference in this game, after having a quiet week in Cleveland.

Without question, this is a must win game for Baltimore.

They are playing one of the more unpredictable teams in football in Tennessee, that’s beaten teams such as Philadelphia and Jacksonville, while also losing to teams such as Buffalo and Miami. Baltimore’s offense hopes to rebound against former defensive coordinator Dean Pees, and their defense looks to continue to dominate against one of the worst offenses to start the season. On paper, the Ravens should win this game, but if we take a look back at last season, we know that this team has struggled in Nashville before. I am going to predict a hard fought loss for Baltimore here, as new head coach Mike Vrabel wins the chess match versus John Harbaugh. 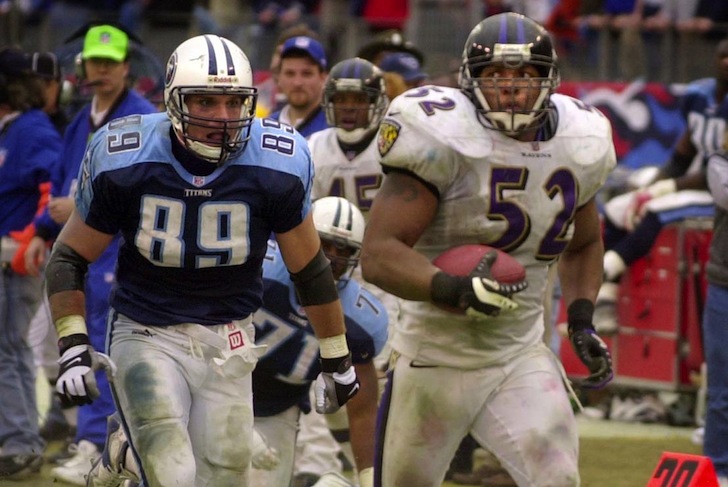 For Baltimore’s offense, it has been a tale of two sides this season. When playing from behind, or when they abandon the run game early, the entire offense loses confidence, cohesion and explosion. I tweeted out earlier this week that the only way the Ravens have adjusted to the new NFL is going back to aggressive downfield passing. They don’t have the personnel to run power zone scheme (un-athletic offensive lineman), yet have the receiving core to fuel such an offense.

Harbaugh was correct in saying that the teams run the ball enough – they just aren’t efficient enough. No Ravens running back is averaging more than 3.8 Y/A, and starting running back Alex Collins is only averaging 11.4 touches a game. Most of this will fall on Offensive line play, with Alex Lewis, Ronnie Stanley and James Hurst being non-factors in the run game (yet Stanley is pass blocking well). Collins might have his way though versus a Titans defense that is ranked 22nd in the league, and will manage 80 yards and a score. The trend this week was Michael Crabtree’s drop issues, which continue this week versus a deep Titans secondary.

John Brown and Willie Snead will muster no more then 60 years each, while rookie tight end duo Mark Andrews and Hayden Hurst will play integral parts versus a young Titans linebacker corps. I predict Andrews will have a stat line around 5 catches for 55 yards and a score, while Hurst will muster 6 catches for 50 yards. Flacco will find it hard to go deep against safety Kevin Byard, who also gave him trouble last year. Flacco will most likely be around 25/45 for 260 yards, while tossing a touchdown and and two interceptions. I also expect Edge rusher Harold Landry to have a day against both tackles, and Jurrell Casey will embarrass Alex Lewis. (Not looking forward to that).

The Ravens defense should have a good day versus a Titans team playing without centerpieces like Delanie Walker (IR) and possibly pro bowl left tackle Taylor Lewan. Mariota has thrown more interceptions than touchdowns for the start if the season. Even though he has been dealing with an elbow injury, it is tough to see a once promising rookie struggle with the pieces he has at his disposal. Jimmy Smith should have no problem against breakout player Corey Davis, and receiver Taywon Taylor will have a rough day against Tavon Young (who missed Thursday’s practice with a new hip injury). Running back duo Derrick Henry and Dion Lewis have had a rough start to the season, and it won’t be any better against the stout Ravens defense. The interior line of the Titans hasn’t been strong so far, so Brandon Williams, Chris Wormley, and Michael Pierce (really praying he plays) should shut them down. The Titans will be lucky to muster more than 300 yards of total offense.

Marcus Mariota will toss two interceptions, which might make this game close.

Here’s some great news about the game – it’s going to rain in Nashville Sunday.

Some great news about the game Sunday… pic.twitter.com/xYv9cdgNL5

The current forecast says drizzle early, then heavy rain by night. Remember, this is a 4:25 start, so hopefully the skies will be opening up by halftime. Why? Because Joe Flacco is a mudder!

I despised Dean Pees during his time in Baltimore, so I fully expect the universe to have a nice laugh at me on Sunday. That said, I’m putting on my purple glasses and predicting a comfortable Ravens win instead. I’ve spent the last week convincing myself that Cleveland is one of the best teams in the NFL (If Baker starts in Week 1, they beat Pittsburgh, with a kicker they beat Pittsburgh AND New Orleans, etc. etc. – No shame in losing a tough one there!), so I’m comfortable writing that loss off.

Hayden Hurst only had one catch last week – that’s unforgivable. He explodes onto the scene this week, with five for 65 and his first touchdown. Collins has 78 yards on 14 carries, and Allen adds 41 on 10.

The defense is every bit as good as they were last week, but this time the O backs them up a bit, instead of giving the opponent the ball right back time and again. Mariota is sacked three times, fumbling once (recovered by Matt Judon), and intercepted twice (Jimmy Smith and Anthony Levine, continuing his string of stellar play). That 3-0 turnover margin is the nail in the coffin, but these Ravens are just flat out better than the Titans.

If there’s one thing we know about Harbs teams, it’s that they respond to adversity (how they deal with success is another story altogether…), and they’ll show that resilience this week.

Maybe I am being cliche here, but this is a pivotal game Sunday. A win and the Ravens stand at 4-2, which is what most fans hoped for at the conclusion of this three game road trip. A loss puts them at 3-3, a two-game losing streak and with the Saints on the horizon it could easily turn into a three-game skid and the beginning of the end for the Ravens (and maybe Harbs!).

Another plot that is not getting a ton of pub is the Dean Pees factor. You have to wonder if this team really wants to win this game more because of facing their ex-DC. I mean, how many games did this man cost the team over the past 2-3 years with his B.S. play calling in the 4th quarter!?

On a side note, how fitting would it be for the Titans to take the lead with two minutes to go in the game and Pees goes to his standard prevent defense and the Ravens march down field for the game winning TD a la, New Years Eve?

Onto the game, I trust the Ravens more then the Titans who just do not really impress me: Marty will be Marty and continue to push the run game aside. Collins and Buck combine for under 20 carries. Flacco will throw over 40 times and go for 300 yards Hayden Hurst score his first TD of his career.

The Ravens defense picks off Mariota twice and sacks him four times.

Cyrus Jones has at least one punt return of 30 yards.

The Ravens pull away late and get revenge on Dean Pees for keeping them out of the playoffs last year!