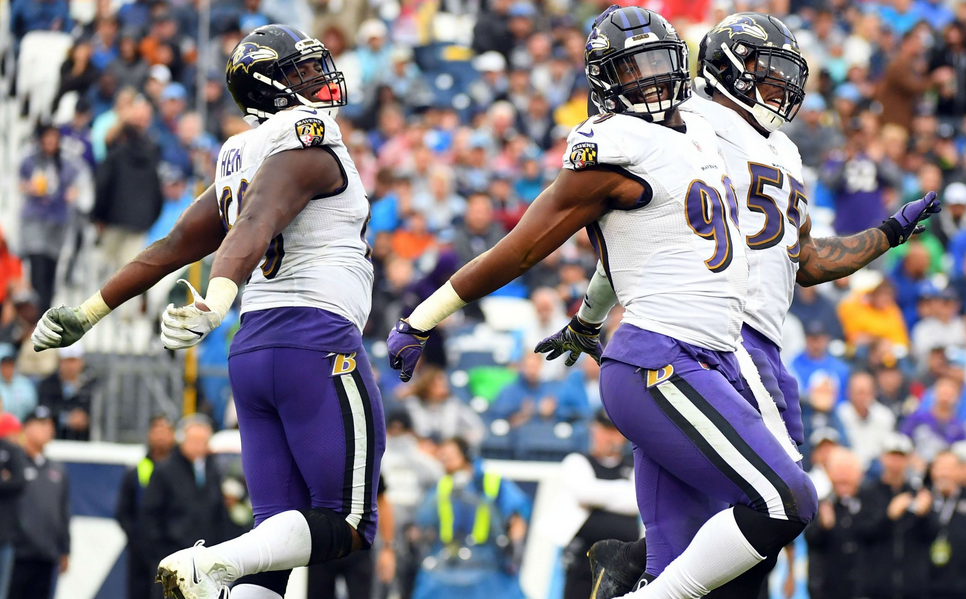 Before jumping into today’s review, I want to take a second to thank my colleagues Adam Bonaccorsi and Brandon Portney for taking on the grades these past two weeks.

This team has become a yearly emotional rollercoaster, and I can’t think of a better way of describing than quoting the infamous Ron Burgundy:

It’s hard to find too much to complain about in a 21-0 win, but the offense still wasn’t as good as it can be.

Maybe that’s game script or maybe it’s our coaching…find out below.

The Flacco Report: A-

Through six games of the 2018 season it’s safe to say that this team, not just the offense, will ride or die with Joe Flacco’s play.

You can usually tell from his first few throws whether he’s on or off on that day. Well, today, he was on and finished the day with 238 yards on 25 completions, with a TD and an INT (that could have easily been overturned had it even been reviewed – WTF, NFL?!)

It’s hard to fault him much for the INT as he was hit while throwing causing it to be high and it was tipped by Willie Snead to the defender. Unfortunate play more than anything.

You may be wondering why the grade is so high. Well, the TD throw to Michael Crabtree in the end zone may have been one of the best throws I’ve seen from Flacco since the 2012 playoff run. It was just perfectly placed and this could be the momentum boost that the Flacco-Crabtree connection needed.

A consistent theme grading these guys week to week is that the running back group doesn’t have the production to justify a high grade, but at the same time it’s hard to fault them with the poor run blocking.

Today was no different. Big shout out to Gus Edwards. He moves his feet extremely well and is a very decisive runner.

A few things that should be noted is that they ran extremely well out of shotgun with three-WR sets, which makes sense because the defense empties the box a bit. They also are running outside zone better than they have since Gary Kubiak was here in 2014.

To get these guys going they need to keep doing what works well and not abandon the run moving forward.

Wide Receiver and Tight End: A-

Would all the Michael Crabtree haters please stand up

Alright, I had to go there, but to be fair, criticism was obviously well earned. Crabtree was drawing comparisons to Breshad Perriman (who?) for his eight drops to start the year. The thing about Crabtree is that he has a resume to give some confidence to fans that he can get back in his groove. To contrast to Perriman, Breshad was literally still learning the proper technique…in the NFL…yeah that’s outrageous.

As for the rest of the gang, great contributions from Willie Snead who is one heck of a chain mover and Mark Andrews who continues to find space in the seams. John Brown made a nice 23-yard grab, but other than that his big play abilities were not needed today.

The disappointment? Hayden Hurst had 0 catches on 1 target. It’s early and we’re nowhere near hitting the panic button, but it’d be great to get him going sooner rather than later. The tight-end-by-committee approach will not benefit him in that regard.

Flacco hasn’t has a ‘sackless’ game since Week 13 of last year, but he was extremely well protected on Sunday against a pretty good group of pass rushers who had 13 sacks through five games coming into this contest.

The run blocking is still a mess, but it’s going to be hard to clean up with this group. They just simply do not get enough leverage to make the running game effective.

The Alex Lewis injury was concerning and I would like to send my best to Lewis and his family. Until we hear more, nothing but prayers.

Make sure to check RSR this week for Filmstudy’s weekly offensive line scoring.

Sacksonville? More like Sacksomore…alright that’s a terrible nickname, but my goodness, a new franchise record for sacks in a game!

Defensive Line and Edge Rushers: A+

Coming into today, the Titans had only given up nine sacks all year. This group of possessed pass rushers came home on 11…yes I said ELEVEN sacks.

The Ravens are going to have to have a serious conversation about Za’Darius Smith. He’s having the typical contract year where he gets overpaid by another team and the Ravens collect a compensatory draft pick (I’m looking at you, Pernell McPhee).

Typically, it would be a good idea to let him walk, but with father time moving in on Terrell Suggs it’s going to be a different conversation this year. He’s adding some solid looks against the run (he closed hard on Dion Lewis after shedding Lewan) that are looking more ‘every down OLB’ and less ‘situational pass rusher’.

Another question the Ravens should ask themselves is, where in world is Brandon Williams? Everyone is getting a sack today and he was on the sideline having one of his many breathers. That contract gets uglier every game.

I wanted to write a little piece about how much I dislike Patrick Onwuasor being in the game over Kenny Young, but then he gets two sacks and it’s hard to complain. I do not mind Peanut seeing time as a pass rusher or a Swiss army knife type player, but for the love of god Wink get Young in the game anytime you can!

Not much action for the defensive back group. I think Tony Jefferson and Eric Weddle are settling into the new defense quite well. Jimmy Smith looks great in his return and Tavon Young is starting to turn the corner from his injury.

They weren’t tested, but at the same time they deserve credit for giving Mariota pause with the ball and earning some coverage sacks in the 11-sack effort.

This group has a lot to like moving forward. They’ll get a real test next week against Drew Brees and his New Orleans Saints.

Not a heck of a whole lot to see here folks.

Justin Tucker got to give his leg a rest today. Sam Koch did his thing.

The guy that stood out was Cyrus Jones in the return game. It feels significantly more comforting seeing him catch those punt returns over castaways Tim White and Janarion Grant. He had a 26-yard punt return that was extremely well read. There’s something here.

Marty Mornhinweg’s play calling still wasn’t the greatest today, but in a 21-0 win it’s hard to hit him with too much criticism. It isn’t the scheme. The offensive design is working. Guys are open and guys are in a position to succeed. It’s the play calling that week after week just doesn’t seem great.

My big gripe today was the screen passes. It’s obviously a good way to mix it up and try and be a replacement for a run game that is hard to come by, but there were just too many that weren’t working.

I get it, it’s 21-0, why complain? Well, the main reason is that it will become an issue in games like last week against the Browns. It seems that Marty almost outthinks himself too often.

It also seemed the offense went conservative too quick. After going up 21-0, the Ravens punted on their last three drives and none of them went over 25 yards in length.

Za’Darius Smith gets the game ball. He looked the part of an every down OLB/DE. His versatility was evident and along with Terrell Suggs he led one heck of an assault on Marcus Mariota.