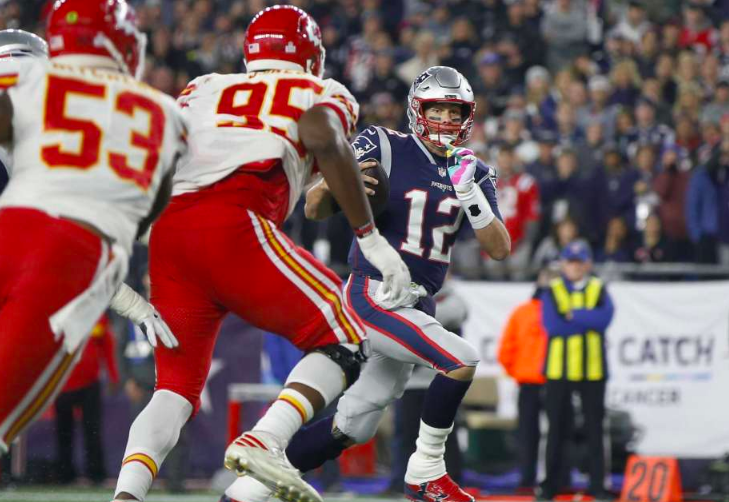 How great was Week 6? Ravens win, Bengals drop to 4-2, Browns fans came back to earth, Aaron Rodgers continues to be the GOAT, John Gruden said something stupid, the Bills Peterman’d themselves again, the Jags D got manhandled by a bottom-5 team… just stupendous.

Honestly, the only ‘negative’ of the NFL week was the Patriots winning on a Brady game-winning drive so we have to hear the national media gush over them non-stop all week, and obviously move them top-3 in Power Rankings. You know they’ve just been waiting for this moment to come, ever since a few select national media members started their “Gordon to Patriots” petition and got their way.

But it’s cool! We shake it off because we like our underdog status in Baltimore! We’ll keep flying under the radar and shock the world…

1- Spreading the wealth on D.

Yes, the 11 sacks – a Ravens record and one shy of the NFL record – were extremely impressive. But what is more impressive for me? Those 11 sacks came courtesy of eight different players- Matt Judon, Za’Darius Smith, Terrell Suggs, Tony Jefferson, Kenny Young, Anthony Levine Sr, Patrick Onwuasor, and Chris Wormley. Wink Martindale is throwing so much misdirection and so many different looks at offenses that the pressure can literally come from anywhere. A drastic change in direction from the previous regime, where Dean Pees basically showed opposing QBs exactly what was coming (or not coming).

The Ravens opened the 2nd half with a touchdown drive, but never scored again after that. Some may be alarmed that once again, the Ravens O did exactly what the D has done by limiting points on the board in the 2nd half. Personally? I’m not worried and I think it was by design. The Ravens defense showed no signs of letting up, and the focus at that point became killing clock. No need to run the score up in the 4th quarter when you’re already up three scores and the Titans offense never made it past the Ravens 37.

3- Balance returned to the O.

37 pass attempts. 35 rushing attempts (Gus Edwards with 10!). Finally a balanced offense, and what’dya know? It ended with a W! Here’s to hoping Marty maintains the balance next week as the Ravens take on the Saints and their top-ranked rush defense (I honestly think it’s because their 30th ranked pass D prompts teams to throw all over them, not so much that the Saints stuff the run).

4- Should we worry about Wink?

That was such a clickbait-esque lead in, but I mean it. No, not that his defense will fall apart. I’m worried that if he keeps up this trajectory with his exotic play calling and league-leading defense, is their a chance he starts becoming a head coaching candidate. I can think of 3-5 possible teams looking for a new coach after this season (starting with the Broncos), and it wouldn’t shock me to hear the whispers later this year.

5- This game has me re-pissed about the Browns loss.

The Ravens came out on fire versus the Titans. The play calling versus a substantially better defense was great. Crabtree made all the catches. Joe hit all the targets. Gus Edwards averaged over 4 yards per carry on 10 carries. The Ravens utilized the Tight Ends on crucial third down plays. The only turnover was when Flacco had his arm hit on the pass (and that very well could have been reviewed and overturned), but otherwise a clean day.

WHERE WAS ALL OF THIS THE PREVIOUS WEEK???

6- Aaron Rodgers is still the best QB in the NFL.

Aaron Rodgers started the season rocky as hell versus the Bears. Then he blew his knee up in the same game, came back and lit the city of Chicago on fire. He continues to play on a bad knee, and now he loses his WR2 and WR3 and STILL manages to put up these 425 yard 2 TD/0 INT games and ropes in a come-from-behind last-minute win despite a piss poor defense.  Dude is carrying the city of Green Bay on his back and bum knee. A-a-ron has my MVP vote as of today.

7- Saquon Barkley was absolutely the right pick for the Giants.

This past Thursday versus the Eagles, Barkley became the 1st rookie running back to put up 400 rushing yards and 300 receiving yards through six games. TNF showed comparisons to the legendary Barry Sanders. The kid can cut it with the best of them and drive defenders backwards with ease. He has all of the makings of a stud running back in the game.

So why do Giants fans keep lamenting the pick and insisting they should’ve drafted a QB instead? It’s not like a rookie QB was the missing piece from a contending team. The G-Men still need 1) an entire Offensive Line, 2) a Tight End that stays healthy, 3) several defensive players to slow the run game down, and 4) a new coach.

Why take a Sam Darnold or Josh Rosen this year and pass on Barkley when they’ll have a top-3 pick next year to land Justin Herbert (I think he’s overhyped but he’ll go top-5 undoubtedly)?

8- Mitch Trubisky reminds me of a young Flacco.

This is both a good and bad thing. Trubisky has a cannon, and the ability to put up phenomenal stat lines (see his six TD vs Tampa), but also has the propensity to disappear in a game (twice this year with 0 TDs) and throw ill-advised picks (Q4 vs Miami up 21-13, Trubisky threw a pick in the end zone, Fins tied it up on ensuing drive). Much like a young Joe Flacco, he has a solid run game and defense to support him, so he’ll be okay, but many it’s crazy to watch him and see shades of a younger #5.

The Ravens got embarrassed for a half of football versus the Bengals earlier this season and couldn’t complete the comeback. While Cincy came into Pittsburgh this week 4-1, I’ve long said their record is not indicative of the team they are – the Ravens should’ve won their game in Cincy, the Falcons shouldn’t have collapsed late, and the Fins blew a 17-0 lead in the 4th quarter.

Once again, it looked like Andy Dalton had luck on his side with a late lead thanks to an A.J. Green touchdown snag late in the game, but get this – the Bengals win probability actually went DOWN by scoring a TD with 1:08 left. Naturally, the Steelers marched down the field and AB scored on a screen (illegal if you ask Bengals fans, but also legal for sure).

Welcome to 4-2 Cincy. We’re ready for Round 2 and redemption.

The Jags got PLASTERED by a bottom-5 Cowboys team, the formerly 5-0 Chiefs have an atrocious defense and lost to the Pats, the Pats have an equally awful defense, and you can throw the Steelers in that mix as well. The Bengals have given up the 4th most points in the AFC, the Titans aren’t good, nor are the Dolphins despite their records…

The Conference is wide open.