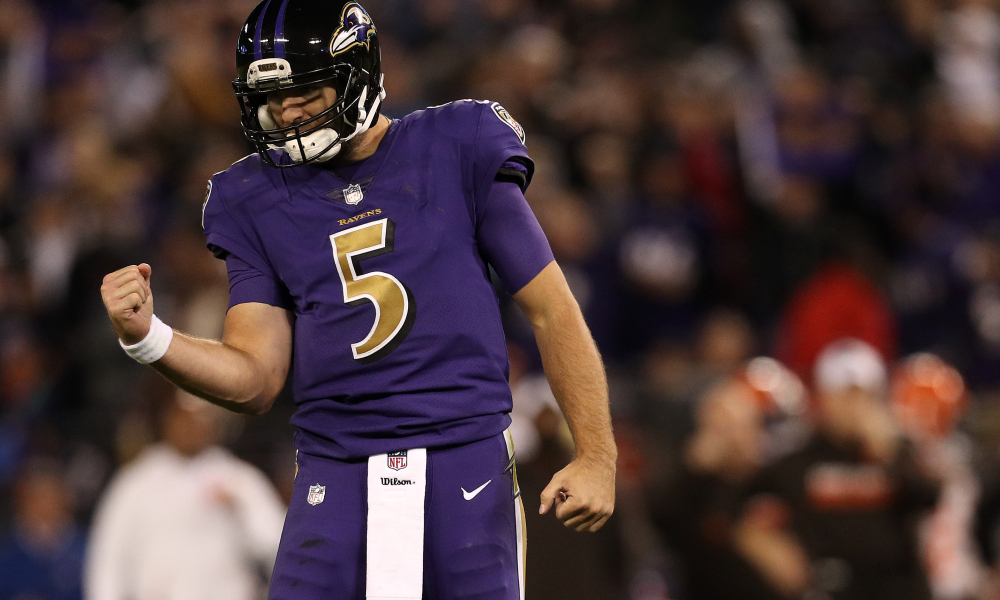 — Devonta Freeman is heading to the IR.

— Ryan Tannehill is out again; Brock Osweiller will get his second start.

— Leonard Fournette and Dalvin Cook could return this week, but check the inactive lists.

— Check the injury report on Calvin Ridley as well.

— The Chargers and Titans are in London this week with a 9:30am EST kickoff.

— Green Bay, Oakland, Seattle, and Pittsburgh have a bye week.

— Denver at Arizona starts off the week on Thursday.

— Giants at Atlanta closes us out Monday.

Joe Flacco: Flacco, who has averaged 17 fantasy points a game, faces the Saints, who are giving up 21 fantasy points to QBs. This is easily the worst defense Joe has faced and he is planted as a top 10 QB this week at home.

QB: Baker Mayfield: The Bucs have surrendered over 300 passing yards and an average of 26 fantasy points per game to QBs this season.

RB: Tarik Cohen: Cohen has become the Bears back to start in fantasy. With back-to-back seven-catch games for 90 and 121 yards and always a threat in the run game, his value against the Pats puts him at a solid RB2.

WR: DeAndre Hopkins: In his last three games against the Jags defense, Hopkins posted games of 18, 18 and 16 points.

Robert Woods: Quietly, Woods has scored double digits in all five games this year. With no Kupp this week, he is in line for more targets and yards.

TE: O.J. Howard: Howard has scored 10 or more points in three of his four games. Winston loves TEs and the Browns have trouble covering them. Howard is a high side TE1 this week.

QB: DeShaun Watson: There might be a big play or two here or there, but with how bad that O-line is playing in Houston and Watson not 100% to run for his life against a team that loves to blitz, he is ranked low this week.

RB: Mark Ingram: Ingram is not the kind of back who does damage to the Ravens. The Ravens have allowed just two rushing TD all year and rank sixth in rushing yards allowed.

WR: Corey Davis: Davis isn’t worth more than a bye week fill-in until the Titans O-line can protect Marcus Mariota better. Davis has been held to single digits in three of his past four games.

TE: Jordan Reed: Reed got off to a solid start, but has slowed down in recent weeks. He has posted back to back outings of eight and three points and has not scored a TD since week One. Dallas has allowed just one TD all year to TEs.

RB: Frank Gore: Over the past three weeks, Gore has more carries and rushing yards then Drake. With Drake fumbling on the goal line last week, Gore could cement his spot as lead back.

WR: Taylor Gabriel: Gabriel has posted back-to-back 100-yard games and leads the team in receiving yards, yet no one it talking about him!

TE: Austin Hooper: Hooper has quietly produced back to back nine-reception games. With the TE position so watered down, Hooper is solid option in DFS formats.