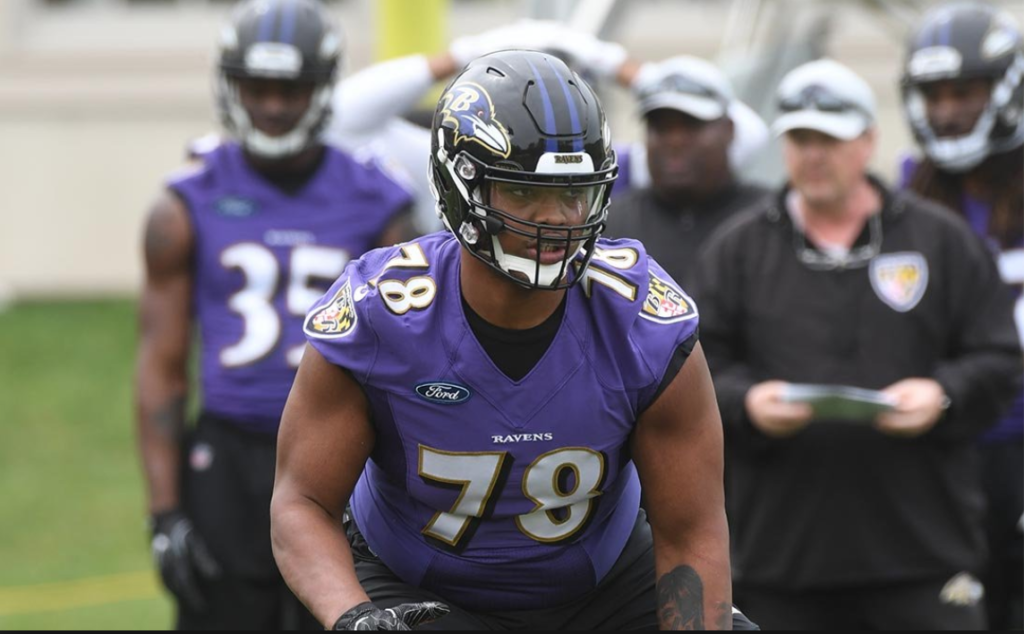 It’s Saints week in Baltimore, and so, I’ll be making (and have been making) references to one of the greatest movies of all time. If you get the reference, good on you. If you don’t.. Use Google, figure out the movie, and make your life so much better.

It’s Friday (er, it was when I wrote this), which means another Chicken Box – a collection of my thoughts about Ravens (and NFL) storylines. Let’s get into it.

Two sound theories in one day, neither of which deal with abnormally sized men. (One does.)

Ravens LG Alex Lewis went down in a scary fashion on Sunday, with his eyes glazing over, and him crumbling to the ground. Since then, it has been said that he ‘looks good’, but he didn’t practice all week, and is listed as OUT for Sunday. While Lewis hasn’t been great this season, requiring help repeatedly, his potential inability to play could result in the OL harmony getting shaken up.

My theory, though admittedly, unconfirmed, is that the Ravens will push RT James Hurst over to LG, where he performed admirably last season, and start the rookie tackle Orlando Brown, Jr. (an abnormally sized man) in his stead. It seems to be the ‘best five’, as opposed to having Bradley Bozeman, who was drafted as a center, at LG. While the Saints front seven isn’t exactly formidable, I would leave nothing to chance.

The other, or second part of this theory, is that it could help the Ravens’ struggling run game, and let Alex Collins go full Paul Smecker in the end zone. This would be a huge boost, given the Saints’ top-ranked run defense – it would allow the Ravens to balance their offense like they did against the TItans.

It is only Week 7, but playoff seeding is starting to be a topic of conversation, and Super Bowl hopefuls are starting to emerge. The Baltimore Ravens appear to be one of those hopefuls, and the national talking heads are starting to take notice.

You play, to win, the game. The Ravens have been on the outside looking in, since 2014, when it comes to the playoffs. A lot of fans would be happy simply making the postseason this year. I am not one of those fans. I want a third ring, and I found myself wondering if Baltimore had the stones to pull it off in Ozzie Newsome’s last year as a GM (shades of Ray Lewis’ last ride).

The defense seems to be stifling, as the best overall defense in the NFL (and it isn’t even close), leading in sacks, as well as five other statistical categories. Everybody knows that the Ravens haven’t allowed a second-half touchdown through six weeks, a feat that hasn’t been accomplished since the 1934 Lions. They haven’t allowed a TD in 21-of-25 quarters of play, which is even more wild. They’ve allowed more than 14 points just once in six weeks, to A.J. Green and the Bengals. They’ve allowed the lowest passer rating in the NFL, to top it all off. Call me crazy, but this might be the second-best defense that Baltimore has ever fielded.

The offense has also been a top 10 unit, which is something that Baltimore hasn’t seen in a long time. Joe Flacco is playing some of the best football of his career, when you combine box stats and intangibles. Willie Snead, John Brown, and Michael Crabtree are all experiencing revival tours thus far, and the tight end group is the deepest… ever. While they are still slightly inconsistent, the Ravens have shown time and again that they can make a deep run with an above-average offense, and a great defense.

All this being said, I don’t know that a Super Bowl victory is in the cards for 2018. Do I think that they could make it there? Sure. Stay healthy, get some good bounces their way, and they can run with anybody in the league. Do I think that it’s likely? Absolutely not. This team is poised for a deep playoff run ending in heartbreak, likely to an inferior team. 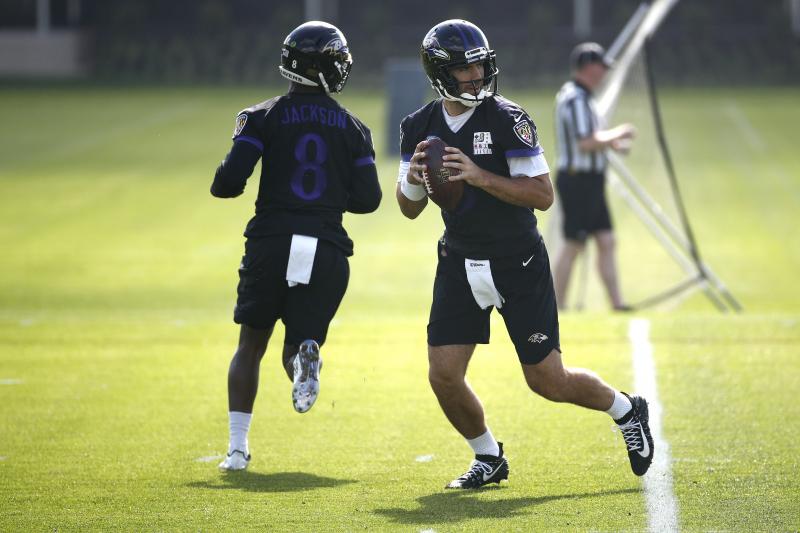 Why are we still debating Lamar vs Joe?

Honestly, mate, I’m tired of it. It’s Week 7, Joe Flacco is playing well, and I still can’t go a day without hearing or reading some idiot claiming that Lamar Jackson is ‘ready to take over at QB’, and that he should ‘start over Flacco’. If that’s your thought process – if you truly think that Lamar gives this team a better chance to win football games – then you are truly a troglodyte.

Look, I understand that people are hyped (I’m not) about getting Jackson on the Ravens – he’s a phenomenal athlete. But that’s all he is, right now. An athlete. He is not an NFL QB at this juncture, nor will he be, this season – even if Flacco got hurt (knock on wood). He is, however, a weapon at the disposal of the Ravens, one that, if used correctly, can be very dangerous.

I implore you, casual football fans that lean towards the purple and black, stop the madness. There is no situation in which LJ is ready to lead this football team. It’s just not logical. He’s thrown five live action passes, and completed one. Yes, he showed out well, late in the preseason (don’t go by stats comparing him to the other rookies in preseason, he played one more game), but that’s against vanilla defenses and players that are now bagging groceries.

I understand the hype, as I mentioned earlier. I understand that Lamar is a ‘gamer’, and has a competitive spirit, a fire that is visible on every play – which leads to him taking unnecessary hits, by the way. I get that after 10 years, you’re tired of seeing Flacco, and ready for something new. You need to have patience. I’m not saying that I don’t think LJ will ever be ready. I am, however, saying that he isn’t ready right now, and those of you who think that he is, need to take a football analysis course, or stay out of conversations like those.

We got us an away team!

The Ravens have played just two games at home so far this season, including a three-game stretch of road games, leading up to this Sunday’s return to M&T Bank Stadium. Call it a scheduling quirk, call it lack of love from the schedule-makers, call it what you will – no matter what you call it, the Ravens have been fairly successful on the road, going 2-1 over the last three. In 2017, the Ravens had an even split on their road games. In 2016, they were markedly worse, going 2-6 on the road. Same with 2015. The Ravens have just four road games left in 2018, and look to be able to win the majority of those, reversing a trend of .500 or below on the road in recent history.

While it’s great, having a team that is built to win away from home, having six home games left is even better. The Ravens have been historically great at home, with a 61-21 record under John Harbaugh. While there are some tough home matchups still remaining on the schedule, you can feel confident that they will walk away from most, if not all of those with another W in the column.

…but it’s simply not realistic, nor is it necessary. Mark Ingram, running back for the Saints. Amari Cooper, wide receiver for the Raiders. The list goes on, but you’ve heard most, if not all of the names that get bandied around.

Look, I’m just being honest. The Ravens don’t need anybody that’s been outed as being on the trade block. Ingram would be a great add, but guess what? He’d run behind the same 31st ranked run blocking offensive line as Alex Collins. Cooper doesn’t fit anywhere in this offense, and would take snaps away from guys who deserve them (shoutout Chris Moore). Adam and I discussed this on this week’s episode of Neutral Zone Infraction – unless it’s an offensive lineman, then why bother trading away a rotational player or draft capital? It’s Shakespearean (doth no sense make).

Now, all this being said, I definitely wouldn’t mind the Ravens taking a run at Patrick Peterson. That poor guy deserves better than the current iteration of the Arizona Cardinals. Also, can you imagine the defensive backfield that Baltimore would boast? Peterson, Jimmy Smith, Marlon Humphrey, Brandon Carr, Tavon Young, Anthony Averett, and the safeties… nobody is passing against that.

Alas, that’s more of a pipe dream than anything. So, back to my original point. Stop with the hopes and dreams, because what comes next is even more asinine. When another team inevitably signs the player that you want, the next post you make is ‘Fire Ozzie! Why didn’t you sign (insert player here)?!’ It’s absolutely ridiculous.

Well, a couple of these definitely let me disdain for some members of this fanbase shine through. I’d apologize, but I wouldn’t mean it. For now, I want to know what pet peeves you have, with the Ravens fanbase. Sound off in the comments! Also, follow all the writers of Russell Street Report on Twitter, and be sure to check out our podcast, Neutral Zone Infraction, on iTunes!