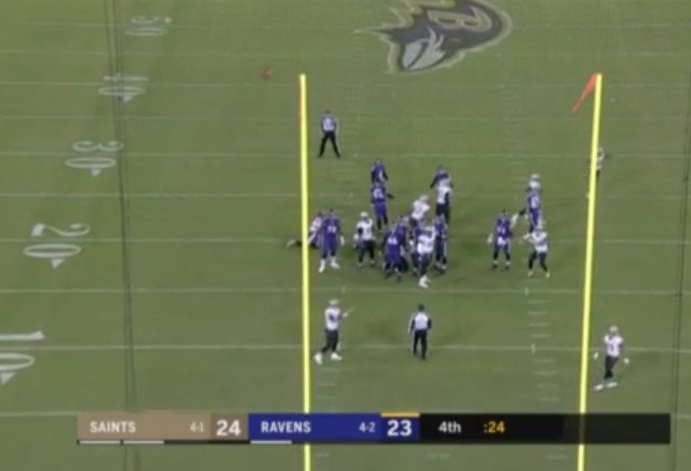 Words are hard to come by while writing this. The haunting of Billy Cundiff just repeated itself right before my eyes. Justin Tucker misses the first extra point of his career with the game on the line with 24 seconds left.

It was truly a game where an unstoppable force met an immovable object. Statistically speaking, a top 3 offense comes into the home of a top 3 defense.

There’s plenty of blame to go around for the unfortunate loss that Ravens fans just had to witness. In the end, I’m not sure it matters as that loss felt like a Miguel Cotto left hook to the stomach.

Going into halftime, there wasn’t too much to harp on with the play of the offense. Coming out into the 3rd quarter, it seemed like the entire approach changed. We’ll get into that in the coaching section, but it just wasn’t a strong performance from top to bottom.

The Flacco Report: B-

After a slow start, he settled in and finished the half strong leading a six-play, 75-yard drive that culminated with Lamar Jackson punching the ball in.

Flacco led five second half drives. two ended in passing TDs, two in punts and one with a turnover on downs. It was the second punt drive and the turnover on downs drive that put a stain on Flacco’s day. He looked off and floated back-to-back passes that could have been conversions if they had a little more zip.

In the end, Flacco put the team in a position to succeed and go into OT, which to be honest he normally does. With such an up and down game an average grade seems warranted.

Another week of tough running for the Ravens running back group. Running backs had 16 of the Ravens 23 carries for 41 yards.

As much as this offensive line doesn’t do the backs any favors, it’s also hard to see Alex Collins run with so much hesitation. I’m sure some of it has to do with seeing opponents jerseys as soon as he touches the ball (especially on these useless pitches and sweeps we keep seeing), but it’s becoming very hard to watch. Collins’ running style (which fans love, and rightfully so) just doesn’t seem like a fit for what the Ravens offense is trying to do.

Wide Receiver and Tight End: B+

Another group that went through ups and downs all game. However, it was John Brown and Michael Crabtree’s clutch catches that boost the grade here.

Brown finished with seven catches on seven targets for 134 yards and Crabtree hauled in five passes for 66 yards. Both contributed significantly on the Ravens’ final drive that should have tied the game.

Willie Snead had two uncharacteristic drops against his former team. While I think the pass to Hayden Hurst with 3:35 left in the 4th quarter could have been better, I still think that is a pass that an NFL TE can bring in. Hurst has been underwhelming since his return from injury. Mark Andrews is saving face in the rookie TE conversation.

This group is just a nightmare. Flacco was only sacked once, but he had to showcase his mobility quite often, sometimes against three-man rushes.

With injuries to James Hurst and Alex Lewis, the Ravens trotted out some backups and Bradley Bozeman had to play banged up the whole game, but it really didn’t look much different than other games.

Orlando Brown Jr. fared well in his regular season debut and the time is most certainly now to put Hurst back at LG, if healthy, and keep Brown Jr. at RT.

When the Saints converted three 4th down conversions on the first drive, I knew it was going to be a difficult task to get them off the field all day. The Saints were 6/14 on third down and 4/5 on fourth down – not acceptable numbers for getting off the field.

However, the Ravens defense was greatly aided in the first half by the Saints only having the ball three times.

The second half was a different story and Drew Brees picked apart a defense that couldn’t pressure him and gave his pass catchers too much room to operate.

Statistically speaking, the Ravens point of attack on defense seemed to do well holding Alvin Kamara and Mark Ingram to a combined 29 carries for 96 yards (3.7 yard average).

The difference is that they couldn’t make a play in the second half when it was needed, as they were gashed for first downs by Kamara and backup QB Taysom Hill.

The sight of seeing the $10.5M man, Brandon Williams, get outmuscled by Larry Warford made my stomach turn. Williams spent more time going backwards than forwards in the second half.

The pass rush was basically non-existent with the exception of the ageless wonder, Terrell Suggs, taking down Brees.

Brees is a hard quarterback to get to. You send multiple guys, he hits a short receiver. You give him too much time and someone shakes loose. I’d have liked to see some more blitzes, and Wink to force the issue a bit.

As Ravens fans learned last year, Ben Watson is definitely on the tail end of his career. However, he became the latest tight end to toast C.J. Mosley. That list is getting uncomfortably long.

Watson brought in all six of his targets today, including a touchdown on the goal line that Mosley chased down. Mosley had a poor day in coverage and it would be interesting to know how many of his 16 total tackles came after positive yards were gained.

Prepare yourselves Raven fans because that man is going to be paid like a top three ILB this offseason.

Can someone please get Jimmy Smith a map!?

Smith spent most of Sunday’s contest lost. Michael Thomas is a top WR in the game, I get it. Jimmy is still getting back from an injury, I get that too. However, he got treated to a clinic on today.

Tony Jefferson was also poor in coverage, giving up a bug play to the Saints third string TE, Dan Arnold (who I have never heard of, but I have to assume that’s Tom Arnold’s estranged nephew?)

It was just a bad day from the defensive back group, but to be fair, they’ve set a high bar for themselves, and were without their best CB, Marlon Humphrey.

The special teams group failed today. I am not going to spend time addressing Justin Tucker’s kick. Tucker has kept this team in so many games over the years with his ridiculous accuracy that I’m not going at the best kicker I have ever watched play the game of football (Yeah, I really do think that).

That being said, the special teams units had a very poor day. On top of the missed XP, the Ravens gave up a fake punt conversion for a first down on the opening Saints drive. To make matters worse, Chris Moore’s return skills have apparently disappeared. He gets the ball on kick returns and basically just runs into the first opponent he sees.

The only thing saving this group from an F was Moore’s downing Sam Koch‘s punt on the 1 yard line. Not only did he down it, but he had the awareness to re-establish his feet outside of the goal line before touching the ball.

John Harbaugh’s conservative approach to football games is well documented. There’s nothing Mr. Harbaugh likes more than a grind-it-out, three-point game. This was in full force today and it led to the biggest issue with the game: offensive play calling in the second half.

I touch upon my issues with Marty Morhinweg’s play calling just about every game, but boy did it stick out today. An official petition needs to be started to abandon some of the run play calls. The sweeps and tosses do not work. They are not Collins’ running strength, they are not the strength of the offensive line, they are just not compatible with this team.

Like seriously, did Marty really call a play where Joe Flacco does an option pitch? What defensive player in this league is going to get faked out by the idea of Flacco keeping the ball? It hurts my head just seeing that play call again and again in my head.

The predictability was also in full force as the Ravens ran on just about every first down.

It’s hard to see a coaching change coming and the reality is this team is skilled and will probably grind out another .500 or better season keeping them intact, but it is becoming exhausting to watch the same issues repeated over and over again.

I’m going to the other side of the ball and giving the game ball to Taysom Hill. This kid is impressive. I can’t think of another player in the modern game that is a QB, RB, KR specialist and also plays TE to block? He gives the Saints a ridiculous amount of flexibility and it was truly something to witness…even though I hated it.

Hopefully Marty watches that game film and gets some better ideas on how to deploy Lamar Jackson.