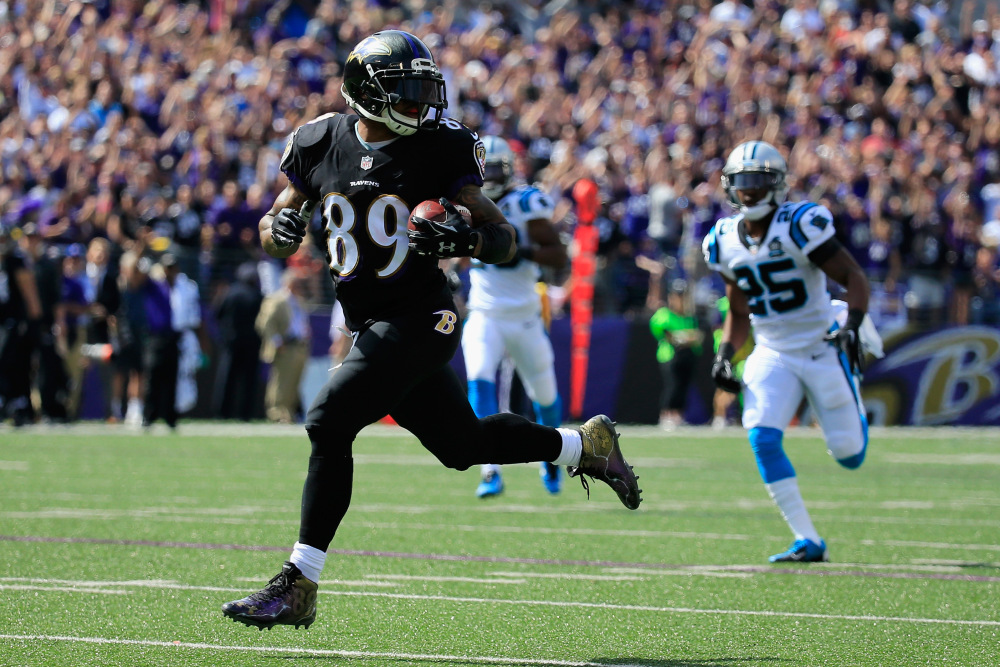 What will we see when the Ravens visit the Panthers in Week 8? Russell Street Report staff give our predictions for the game here:

Sunday’s loss to the Saints stung. A 5-2 team has such a better chance at punching the postseason dance card than a team that is 4-3, particularly with very difficult road games against the Chiefs and Chargers looming in December. The challenges for a 4-4 team are even more daunting. The Ravens really need to win on Sunday.

While watching the Panthers take on the Eagles this past Sunday a few things stood out:

· The Panthers feature a ton of movement on offense to challenge man coverage.

· Christian McCaffrey is an oft-used safety valve when Newton is under pressure, hence the 40 catches in six games.

· Between McCaffrey and Newton’s size, strength and mobility sacks are mitigated.

So, with that in mind, let’s get BOLD!

· Alex Collins will be outgained by Gus Edwards, 42 to 28 yards

· Michael Crabtree and John Brown combine for over 200 receiving yards

— Joe Flacco will have more difficulty throwing downfield against CB Donte Jackson, who is tied for the league lead with three interceptions. If the Panthers can contain John Brown as a deep threat, they will put themselves in position to win the game. Overall, Carolina is ranked ninth against the pass.

— Panthers QB Cam Newton poses a challenge because he is a dual threat. However, Newton will be at a disadvantage if he holds the ball too long because Ravens have a solid pass rush and lead the league with 27 sacks. Newton does have a solid offensive line and has been sacked just 10 times.

— The Ravens are still ranked first in the league for fewest yards (280.6) and fewest points (14.4) allowed. Carolina might use the run to set up the pass behind Christian McCaffrey, who has 378 yards rushing and no TDs on the season.

— The Ravens are playing their fourth road game in five weeks. The Panthers are coming off a spirited victory over the Eagles and are playing solid defense. They will benefit from the home-field advantage.

You don’t want to overstate the importance of this game in the grand scheme of things. It’s a non-conference game, and is thus way down the list of “important” games to win over the course of a season.

However, after last week’s heartbreaking home loss, and with Pittsburgh seemingly turning a corner, this certainly has the feel of a “must-win,” doesn’t it?

Unfortunately, the Ravens have a very concerning list of injuries. Marlon Humphrey still hasn’t practiced since last Wednesday. Jimmy Smith was limited on Thursday, but a groin injury for a CB is very concerning, especially given his play against New Orleans. James Hurst and Bradley Bozeman both missed Wednesday and Thursday, and Alex Lewis is still very questionable after his scary neck injury suffered in Nashville.

A healthy Ravens team wins by double-digits against a healthy Panthers team, no matter where the game is. This banged-up squad though? It’s tough to say. I’ll choose to be optimistic though.

— The defense scores its first touchdown of the season, on a Kenny Young interception return.

— Michael Crabtree leads Ravens wideouts with 85 yards and a touchdown.

— The running game remains stuck in the mud, with no back gaining over 40 yards.

— Justin Tucker is perfect on the day.

This game could be the turning point of the season. Will the heartbreaking loss versus New Orleans cause this team to spiral towards the bottom of the AFC North? Or will it motivate them to go on a tear to win the division? The Panthers pose a huge threat, but I think if anyone can bounce back from the type of loss suffered last week, it’s this team.

The Ravens offense should take advantage of a very average Panthers defense. Their secondary doesn’t have the speed to cover John Brown, and doesn’t have any man-to-man guys to cover a guy like Michael Crabtree. Their zone defense along with their excellent linebacking corps will hold the tight ends and Willie Snead at bay. Kawaan Short will dominate against whoever lines up at left guard and Matt Skura, meaning for the second week in a row Flacco will be uncomfortable in the pocket. Alex Collins will have a tough day, as he won’t have an easy time getting past the brilliant Luke Kuechly. The offense will still manage around 21 points, with Alex Collins rushing for no more then 70 yards, and Flacco having a stat line hovering around 21/35 for 290 Yards and 2 TDs. Brown will be the leading receiver with 5 catches for 110 yards and a score.

The defense will have an interesting time versus Cam Newton. Norv Turner has elevated Cam’s game and the Panthers offense to new heights, even if it doesn’t show up on the stat sheet. Newton is making better throws, and taking fewer hits, making him all the more dangerous. Not to mention they have one of the most lethal running games in football. If Marlon Humphrey is healthy come Sunday, the secondary should be able to contain Devin Funchess and crew, and will give Cam some looks he hasn’t seen this year. I predict Cam will have a rough outing, being held under 200 yards passing, while throwing two interceptions. The run defense will be tested against Christian McCaffery and Cam, but will hold them under 100 yards as a team. In a game in which the better defense will decide the game, I believe Baltimore will be motivated after some questionable calls dictated last week’s outcome.

The Panthers are 4-2. They had a very impressive comeback win in Philly last week, scoring 21 unanswered fourth quarter points after falling behind by a score of 17-0. But they just seem so average to me. “A jack of all trades is a master of none,” is the phrase that comes to mind.

Offensively they are 18th overall. I guess if you had to point out a strength it would be their 4th ranked rushing attack. But that’s in large part thanks to Newton, who is second on the team with 257 yards rushing. Some of that is by design but a lot of it is improvised. Even so, the top three rushers on this team (Christian McCaffrey, Cam, and C.J. Anderson) all average 4.8 YPC or better. Other than that, they don’t scare you too much. WR Devin Funchess and TE Greg Olsen are average in my eyes. I think it’ll be tough sledding for this offense.

Defensively, the Panthers are led by their linebackers, specifically Luke Keuchley. They rank 13th overall (10th vs the run, 17th vs the pass). This bodes well for the Ravens passing attack. I expect the WR trio to all make an impact in this one. Flacco will have a good game on the road and do enough, with the Panthers offense having a tough day, to get the W.