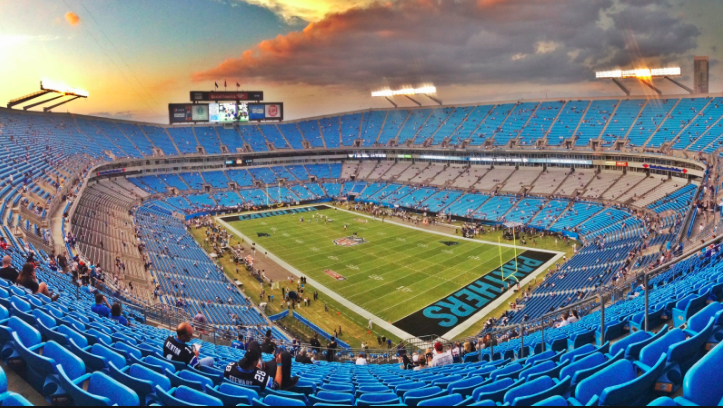 All the info you need to get ready for Ravens-Panthers, in the CRAB BAG! 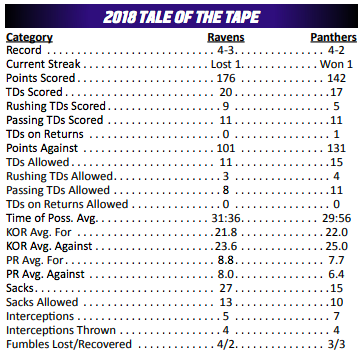 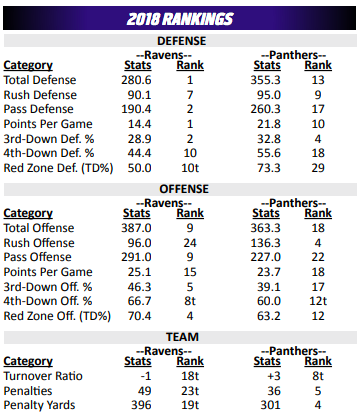 QB Joe Flacco on the Ravens Moving Forward into Week 8:

“There’s no sense in putting your head down and crying about stuff like this. You have to move on. There are good lessons in everything. At the end of the year, we can’t be looking back and regret a game getting away because of how we thought about it the week before. You just have to go ball out, and at the end of the 16 games, you have to be able to look back at what you did and be proud of how you reacted to things. When you do that, that’s how you give yourself the best chance of being in the playoffs. It’s not about worrying about what your record is right now and comparing yourself to everybody else and where you stand with that. Just keep your head down and keep winning football games, and before you look up, maybe you’ll win five in a row and be where you want to be. You can’t do that until the very end.”

“Every kicker, every football player, is going to come across a moment, a challenging moment. If you play long enough, you’re going to have a kick that you want back, and [last Sunday] was that night for me. The only thing you can do is just go to work and try to make the best out of a bad situation. I appreciate the efforts of my teammates, putting us in a position to extend the game, and unfortunately I wasn’t able to put the ball through the uprights. But, more than anything, I just wanted to be here [at the podium]. If I was going to ever teach my son or any young person about accountability, I felt like it was really important that I stand up here and answer whatever questions you guys may have.”

OLB Terrell Suggs on how much he feels for K Justin Tucker after Week 7’s defeat to New Orleans:

“We’re not feeling sorry for ourselves. We fell one point short. We’ve got the best kicker in ball, so we’re not going to worry about that. We’re just going to go back to work. [New Orleans] made more plays than us, and we lost by one point. We’re not feeding into anything else other than that. We lost, so we go back to the drawing board, get over this one quick, learn from mistakes and get ready for Carolina.”

Saints QB Drew Brees on how impressed he has been with the Ravens’ 2018 defense:

“Very, very impressed. There’s really no weakness. They do so many things well. They’re really a talented group of players when you look at their front, their linebacking corps, both their outside ‘backers and their inside ‘backers, and then, obviously, their secondary as well. I really have a ton of respect for these guys. Look at every facet of the game, whether it’s defending the run, the pass, getting pressure on the quarterback, their pressure packages, situational football; they’re just good in every facet of the game.”

CB Brandon Carr on bouncing back after a tough loss:

“You’ve got no choice. We’re in the middle of the season. We haven’t made it to the bye week, so we have to reload and regroup. You can’t dwell on these losses, and you can’t dwell on your wins. You’ve got to get ready for the next week. We’ll learn from this [defeat to New Orleans], take 24 hours to get over it and get back to work on Tuesday.”

GETTING TO KNOW YOU ~ Q&A with James Hurst

Do you identify as a “foodie?”

“Yes, absolutely. I think the origin of becoming a ‘foodie’ came from Portland, OR. My wife and I have a really good friend that lives in the suburbs of Portland, so for that past four years now we’ve spent a week-and-a-half out there. They do food and coffee very, very well out there. We’ve had countless meals there that have been great, and because of that, it sparked our interest to explore Baltimore.”

Where’s your favorite place to eat in Baltimore?

“The easy favorite would be The Food Market – the brunch is really good. Clavel is a really good place, and so is Azumi sushi down in Harbor East.”

There’s a debate amongst the Carolina locals and was wondering if you could settle it. Cookout or Bojangles?

“Bojangles. I think Bojangles is the higher-quality food, but what really seals it is the Bo-Berry Biscuit. It’s so good.”

You’re an avid reader. Have you been able to read any books recently?

“I’ve read two books recently. The one is a series called ‘The Expanse,’ and there’s eight in the series. I’ve read the first three and am reading the fourth one now. A book called ‘Why We Sleep’ by Matthew Walker. He has a PhD in sleep science, so he compiled researches and studies that they’ve done on sleep, the effects of sleep, the lack of it, all that stuff. That has been one of the best books that I’ve ever read. It’s super interesting.”

Who is the best teammate you’ve ever had?

“This isn’t fair – but I played with my brother, Nelson. It’s totally different playing next to your brother. We’re really close – only two years apart. He played tight end, so we still played next to each other in college.”

What is your proudest achievement outside of football?

“I have an amazing wife. She does so much for me and our family. We just got a golden retriever puppy named Cora. She’s awesome. My wife supports me so much in everything that I do. I’m really blessed.”

If you could play any other position other than your own, what would it be and why?

“Defensive line. It’s similar, but being able to go out there and get a sack and have a great game – that’s a great feeling. I think it would be a lot of fun. O-linemen don’t get stats.”

If you weren’t playing football, what career would you be pursuing?

“I’m going to pursue a masters in business to open a coffee shop. I love coffee, which also stems from Portland. My wife’s friend was a barista, and I’ve grown to love coffee. I got to roast with a couple different roasters and was able to meet with them and learn more about coffee. Hopefully one day I can open a coffee shop.”

How do you take your coffee?

“My drink of choice is a ‘Cortado,’ which is four ounces. It’s two ounces of espresso and two ounces of milk. I take my coffee black if I’m getting it at a coffee shop. I do that so I can taste the difference in the roast. Most of the time mass produced coffee isn’t that good, so I’ll put some cream in that.”

What was the best Halloween costume you ever wore?

“My wife and I have had some really good ones. The best one we’ve had was she was a Ghostbuster, and I was the Marshmallow Man. It was really good. We go all out when it comes to Halloween.”

Do you have a favorite scary movie?

“I love horror movies. My favorite horror movie is ‘The Strangers,’ which came out a while ago. The realism of that movie makes it so terrifying.”

Any fall activities beside football?

Will apple pastries be served in your future coffee shop?

“Probably so. Probably an apple fritter – that’s great and pairs well with coffee.”

Ravens assistant head coach/TEs coach Greg Roman spent seven seasons with the Panthers (1995-2001), working with a variety of positions, including the DBs, LBs and O-linemen.

Baltimore WR Willie Snead IV spent a portion of the 2014 season as a member of Carolina’s practice squad.

Carolina WR Torrey Smith played for the Ravens for four seasons (2011-14). He was drafted by Baltimore in the second round and helped the team win Super Bowl XLVII in 2012. Smith also attended college at the University of Maryland.

Panthers GM Marty Hurney is a native of Wheaton, MD.

Like they wish it was a college basketball game instead?

Enjoy the game, everyone.