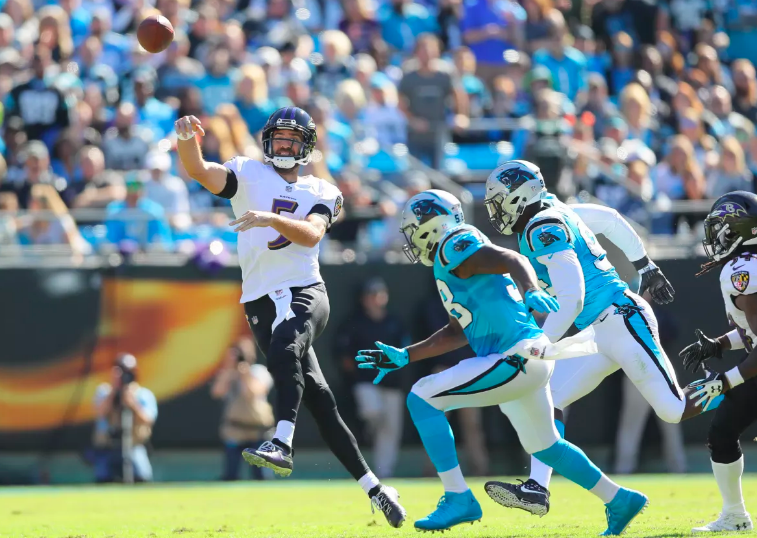 Last week I wrote that the game felt like a Miguel Cotto left hook to the stomach.

Well building off that, today’s game felt like the Mike Tyson right hand to the jaw that puts you out cold.

It’s too bad the bye week wasn’t this week. Not only does the team look physically ready for a week off, but now it’s safe to say they need a mental rest too.

The game started really well for Joe Flacco. He went 5/6 with some nice throws as the Ravens marched down the field on the game’s opening drive, culminating in an Alex Collins 14-yard TD run.

From there, it just got worse and worse as the game went on. The first interception throw at the end of the second half was the patented “Flacco WTF pass” where you just have no idea what was going through his head as he threw it. It was third down and there was nothing there – a throwaway results in a punt. The pick cost the Ravens at least 10-15 yards of field position (assuming a touchback or poor punt), and the Panthers ended up getting three points off the good starting point.

Now before anyone starts yelling at me, this does not mean that Flacco is the reason the team is losing games. It simply means that creating conditions for Flacco to be successful is a key ingredient in winning football games.

As for Lamar Jackson, he’s looking much more comfortable as a runner. His incompletion to a wide open Willie Snead was beyond frustrating and reason for concern. However, his garbage-time TD drive was fantastic. If he can start doing that when it matters we may have hope for the post-Flacco years.

I know it’s getting brought up this week, so I will address it now. I am still 100% in the mindset that this is Joe Flacco’s team and that Flacco is the best option at the QB position if the Ravens want to win this year. Period.

Collins earned bonus points for a beautiful 14-yard TD run. However, he went on to lose points right after for a fumble that led to the Panthers second score of the day.

AC sheds a little bit of the blame for the fumble (only a little) because the run design was so atrocious that Kyle Love went unblocked on the play side during the hand off.

The run game that Marty Mornhinweg and Greg Roman have designed is not going to work. The pitches, ends around, misdirections, etc. are not a recipe for success when your line can’t run block. There best hope is to go with zone runs and mix in some traps or powers. Getting fancy is not going to help and its resulting in a lot of losses and stalled drives.

That sums up the performance from the pass catchers today.

Oh and watching D.J. Moore have a little breakout day, while Hayden Hurst and Lamar Jackson didn’t do a thing till the last two minutes stung an awful lot.

There’s more to assessing a draft than the first 7-8 games of a rookie’s career – I agree – but man does it ever sting.

Going back to that Collins fumble, I’ve re-watched the play 10 times and I honestly don’t know who to blame. It was some sort of misdirection power with Matt Skura and left guard fill-in Hroniss Grasu pulling. Long was lined up in the B gap and simply shot the gap and no one picked him up.

It’s just a bizarre play design. If you’re running a pitch or a stretch AND pulling the play side guard and center, than a misdirection is not effective because the hesitation of the running back’s movement means he’s going to have a very hard time beating the play-side defensive tackle.

So either: someone messed up and should not have pulled OR Marty just has some questionable plays under his sleeve. I’m going with the latter because the fancy run game calls are not working and it’s hurting this team.

The OL did okay pass blocking today. Flacco was only sacked twice and had time on most of his passes.

It’s hard to write anything positive about an edge rusher group that has now had just one sack in their past two games. It seems that the Sac-o-more title I gave them after the Titans game got to their head.

Matt Judon did stand out today and it was his best game of the season. He finished with 10 tackles, including one for a loss and had a couple nice pass coverages.

Going into this season I thought the interior defensive line group was going to be a massive strength, based off the top-shelf starters and a solid rotation. They mostly held Christian McCaffrey in check today, but I still don’t see them dominating the line like I thought they could.

You know that conversation I keep referring to about C.J. Mosley? Well, it’s becoming more and more of a concern.

I will concede that I may have given him too hard of a time after last week’s game, but today was just bad.

The tackle numbers are deceiving, as a lot of those tackles are coming after he gives up a pass and takes the pass catcher down.

The most disappointing was the 3rd and 1 with 5:30 left in the second quarter. Cam Newton ran a triple option. Judon went right to Newton and forced the pitch to Moore. Moore dropped the ball 10 yards away from the LOS. He scooped it back up, as Mosley closed on him and Mosley’s pursuit line was so bad that Moore literally ran around him.

This is unacceptable for a guy that is in line to be getting top ILB money. That play should have been an easy tackle for a loss forcing a 4th down. Instead it was a 28-yard gain for a 1st down.

I caught a little heat for being harsh on the DB group last week, and I will acknowledge it was a harsh grade given the level of competition.

However, today I think it was well proven that they deserve a poor grade. On paper, this should have been a dominant matchup, but they had no answer for Newton who completed 21 of his 29 passes.

Tony Jefferson continues to be a disappointment, who got bullied by Greg Olsen for a TD. Oz paid Jefferson to provide run support and cover TEs. He can certainly tackle in space, but I’m not so sure about his ability to cover the TE position. It continues to look like the Ravens are committed to paying defensive players who do not play the pass very well.

Jimmy Smith had another mediocre performance and it’s safe to say getting Marlon Humphrey back is a huge need for this team.

Not much to see here. Justin Tucker hit both of his XP’s (yay), Cyrus Jones had a nice punt return and Sam Koch punted the crap out of the football.

I am starting to wonder if my expectations for the coaching staff are unreasonable. I seem to leave every game, even the wins this year, disappointed in the coaching performance.

I will say that the preparedness on the road, under John Harbaugh, has me concerned. Getting the most out of his players and being the motivator is supposed to be Harbaugh’s bread and butter, but once again on the road the Ravens came out looking like they’d rather be playing Red Dead Redemption 2 than a football game (Side note – RDR2 is probably the best game I’ve ever played and I encourage you to pick it up!).

The issues with Marty’s run game are detailed above. The most success this team has had is when they run multiple WR sets, spread out the defense and run zone. When they cause jammed boxes by having multiple TE sets or try trickery it just does not work.

Don ‘Wink’ Martindale had a heck of a start, but the last two games from a defensive play call perspective has been mediocre. Where did the deceptive blitzes go? I thought we were getting the return of organized chaos, but against the Saints and Panthers it’s looking like the return of Dean Pees.

It’s hard not to be crushed as a Ravens fan right now. For the third year in a row this looks like an average team that will finish with an average record. It seems to be a lot of the same issues over the past three seasons and we’re nearing a time where a change is needed.

I’ve got to go to my man Lamar Jackson for the game ball. Last week he got his first regular season rushing TD and today he tossed is first regular season passing TD. Garbage time or not, it’s nice to see him make some plays. He also looked great running that option today and Collins’ 14-yard TD run was aided by defenders being on their heels as they accounted for Lamar’s ability to run as well.